Saturday morning US Time, Reuters reported (HT Zero Hedge) that "The British government has rejected an online petition signed by 4.1 million people calling for a new referendum on whether to leave the European Union." The wire service AFP posted a similar story on Sunday, reporting that "The British government on Saturday formally rejected a petition signed by more than 4.125 million people calling for a second referendum on Britain’s membership of the EU."

Reports such as these leave one scrambling to find a word to describe something beyond "bizarre." After all, it's been nearly two weeks since the entire "petition" was exposed as a scam, as most of the "people calling for a new referendum" aren't real people, and there is no way to know how many signers who are flesh-and-blood humans are really UK citizens. Reuters and AFP, even as they covered the government's rejection, still wouldn't acknowledge those realities. Sadly, they're not alone.

A Google News search on "Parliament rejects second referendum" (not in quotes, sorted by date) done at 5:45 p.m. Eastern Time Saturday introduced this writer to an alternative universe where this "petition" and its millions of "signatures" were treated as genuine. Here are some headlines found among the top search results:

Broadening the search to "British government rejects second referendum" (again without quotes and sorted by date) at 7:45 p.m. Sunday evening brought forth another wave of writeups presuming the existence of 4.1 valid "signatures." The most notable result, for its sheer ignominy, is at Snopes.com, the alleged gold standard of fact- and rumor-checking sites which has over time degraded into yet another sited laden with left-supporting shills. Jeff Zarronandia at Snopes, who should return the Pulitzer he won in 2006 as a result, wrote the following on Sunday:

The British government has rejected an online petition signed by over 4.1 million people seeking a second referendum on the UK's leaving the European Union (EU). The online petition, set up by William Oliver Healey, gained more signatures than any other on the Parliament's website and sought to undo the referendum to leave the EU (known as Brexit) that passed by on 23 June 2016 by a 52%-48% vote. However, the British Foreign Office said the referendum was a "once in a generation vote" and the decision "must be respected."

As I noted in a NewsBusters post that same evening, the Heat Street blog exposed the petition as a scam on June 26:

Heat Street can exclusively bring our readers the proof that the spamming of the petition is a magnificent 4Chan prank that the Chads and Stacys of the BBC and liberal media swallowed whole. 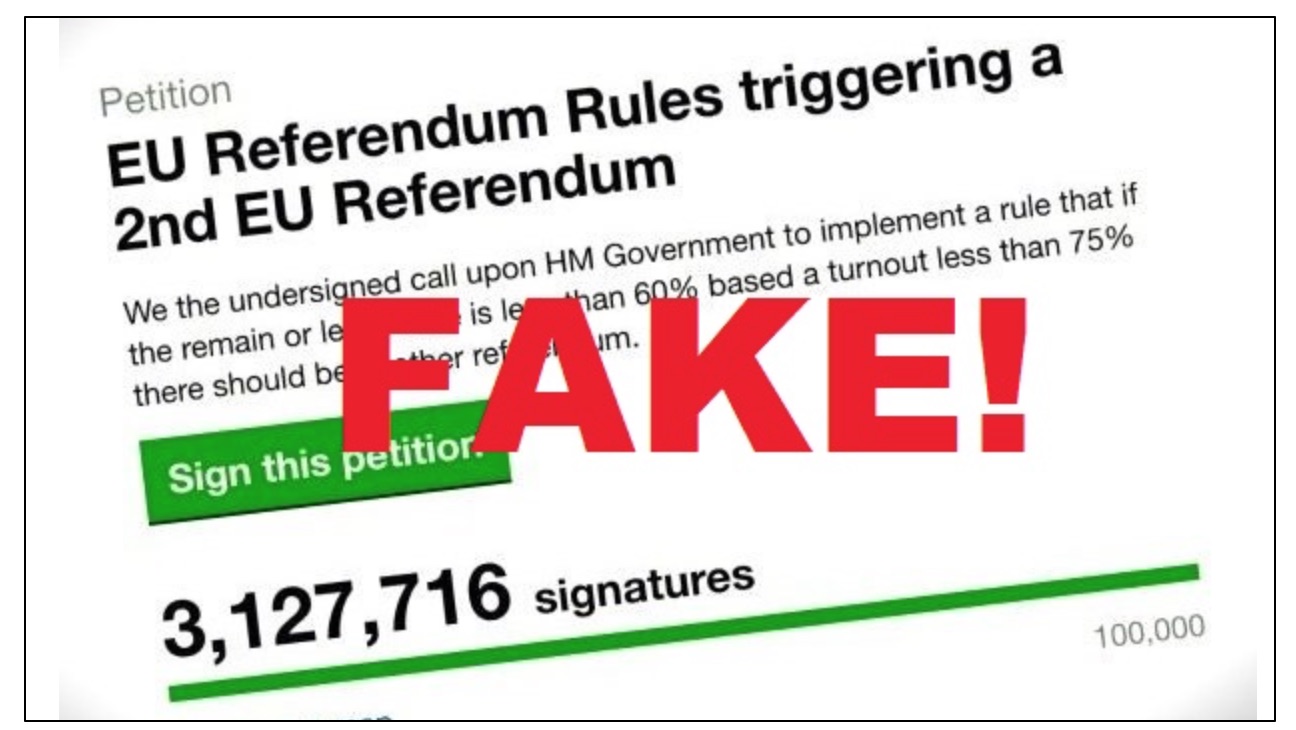 Heat Street's Louise Mensch indeed "brought the proof," including the actual script used to generate bogus petition "signatures"; shots of 4Chan prank participants boasting about their effort; and demonstrating how the pranksters could "add fake names to the petition at an impossible rate, spamming it with unlikely addresses in ‘Ghana’ and elsewhere" while "cycling through a range of fake names to avoid detection."

None of this reality has mattered to most of the world's press, which with rarest of exceptions has at most reported that 77,000 of the millions of "signatures" had been removed, creating the impression that this was the end of the petition's problems with authenticity.

Hardly, especially because the bot-generated petition "signatures" were far from the only problem. Yours truly demonstrated in a June 28 NewsBusters post that anyone in the whole wide world who could provide an easily found British postal code could pretend to be from the UK and submit what the system treated as as valid "signature." My successfully submitted petition was number 3,964,180. Readers will be pleased to know that I received emailed notification of the petition's rejection by parliament on Saturday.

According to Truth Revolt, Sky News reported that perhaps 20 percent of the signatures on the petition are from real UK citizens.

Even Snopes ignored all of the evidence presented by Heat Street and the obvious fact that anyone in the world could pretend to be a UK citizen and become a petition "signer."

Meanwhile, the Associated Press has never backed away from its bogus contention that the entirely bogus petition process was evidence of "a measure of the extraordinary divisiveness" of the June 23 vote.

Apparently, nothing — not even pesky things like facts or even ridicule — can be allowed to disturb the the press meme that UK voters regret what they've done, and that in their view the entire result, even with its 1.27 million vote majority, is still somehow illegitimate.