Ed Rendell, the chairman of this year's Democratic National Convention, stepped in it bigtime in a Sunday interview with billionaire businessman and radio talk show host John Catsimatidis. He got in even deeper trouble with supporters of candidate Bernie Sanders when he tried to explain himself.

Though there's plenty of hostility in the Republican Party these days, there's no shortage of it among Democrats either. Rendell's comment that supporters of Bernie Sanders "have to behave" has raised the vehement ire of the Vermont senator's supporters, but has drawn almost no establishment press attention.

Should it get to that point, Rendell and surely other Hillary Clinton-supporting Democrats are concerned that Sanders delegates at this year's convention in Philadelphia won't handle a roll call vote clinching the presidential nomination for Mrs. Clinton well — perhaps disrupting the proceedings in front of a national TV audience, or even bringing the nightmare of Chicago's 1968 Democratic convention, where leftist riots which occurred outdoors contributed to nominee Hubert Humphrey's eventual loss to Richard Nixon, into the Wells Fargo Center.

Perhaps that's a valid concern. But Rendell, who as a former governor of Pennsylvania and a former Democratic National Committee chairman should know better, talked down to Sanders' supporters as if they're children when he told Catsimatidis that they "have to behave."

In a Monday afternoon Facebook post, Rendell set up a pathetic strawman quote to claim that he didn't say what people think he said: 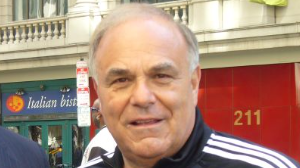 Regarding my interview this past Sunday with John Catsimatidis, I did not say “Sanders supporters better behave themselves.” My exact quote taken from the transcript is as follows:

“I think it’s gonna be a great convention, but of course the key to it is the Sanders people. Bernie’s gonna have his name placed in nomination, we’re gonna have a roll call, and there’s gonna be a demonstration in support of Bernie but he’s going to lose the roll call. His supporters have to behave and not cause trouble. And I think they will, and I think Senator Sanders will send them a strong message.”

So he didn't say that "Sanders supporters better behave themselves." Instead, he "only" stated that "have to behave and not cause trouble." Ed, that might as well be the example used in the dictionary to explain the phrase "distinction without a difference."

Sanders' supporters, as seen in the vast majority of the nearly 400 comments at Rendell's Facebook post, are not handling it well. Just a few examples:

That final comment is likely a big reason why the Rendell "behave" controversy is not a story at the Associated Press or the New York Times, and why it has garnered almost no other establishment press attention.

There is one comic exception which goes full Orwell: A PhillyVoice.com item contains a dishonest strawman headline — "Rendell denies saying Sanders supporters 'better behave' at Philly DNC" — and substantively contradicts itself in its very first sentence:

Former Philadelphia mayor and Pennsylvania governor Ed Rendell has qualified the comments he made Sunday about the behavior of Bernie Sanders supporters at July's Democratic National Convention in Philadelphia.

The blockquote after the story's second paragraph displays the "have to behave" quote, which, as previously noted, means the same thing as what Rendell denied, according to its headline, and "qualified," according to the first paragraph.