Today's stories at the business wires covering this morning's disastrous durable goods report from the Census Bureau ranged from good to absolutely horrid. March orders only increased by a seasonally adjusted 0.8 percent, less than half of the 1.7 percent to 2.0 percent increase that was expected. Additionally, February's originally reported decline of 2.8 percent was revised down to -3.1 percent.

Victoria Stilwell's dispatch at Bloomberg News earned a B-minus. Lucia Mutikani's writeup at Reuters rated a C-minus. As usual, the coverage at the Associated Press, aka the Administration's Press, delivered by Martin Crutsinger, the nation's unofficial "Worst Economics Writer," brought up the rear and earned an "F."

As usual, the AP's focus was on delivering a headline and opening paragraph sufficiently deceptive to lull those who won't click past the teases on their computers, smartphones and tablets into believing that things aren't all that bad. This time, it was accompanied by bad headline grammar:

The misleading headline and lede also represent what is usually read over the airwaves in TV and radio broadcasts.

It's reasonable to believe that the AP and Crutsinger were bound and determined to headline a "rebound" no matter how weak the result, as long as it was positive.

Crutsinger saved revealing that the details were really horrible for Paragraphs 2 through 7:

Orders for durable goods increased 0.8 percent, rebounding partially from a 3.1 percent tumble in February, the Commerce Department reported Tuesday. The result was fueled by a jump in demand for military equipment, a volatile category.

Demand in a category that serves as a proxy for business investment plans was flat in March after a 2.7 percent drop in February.

She noted that the investment category has risen only once in the past five months. The flat reading in March indicated "little-to-no momentum" heading into the second quarter, she said.

Manufacturing has been under pressure for the past year, reflecting global weakness, a strong dollar and falling oil prices.

Getting back barely one-quarter of what was previously lost is hardly the "rebound" AP headlined. Crutsinger's text essentially owned up to its deception.

Crutsinger lost any chance of getting out of the evaluation cellar when he wouldn't admit in his final excerpted paragraph that disappointing consumer spending has also been a serious drag on U.S. manufacturing.

It has become quite clear that AP's virtually absolute refusal to cite how reported economic results performed against expectations exists because it gives their spinmeisters disguised as reporters more flexibility to falsely characterize weak results — something that has been quite necessary during the past seven-plus years.

Stilwell's B-minus at Bloomberg would have been a B but for a really weak title in an accompanying chart. She was strong on facts, including citing the relevance of tepid consumer spending, but the chart which claims softness really shows an alarming recent decline:

Orders for U.S. durable goods climbed less than forecast in March as demand for capital equipment remained weak, a sign that a diminished growth outlook is impeding investment.

Bookings for items meant to last at least three years rose 0.8 percent after a revised 3.1 percent slump a month earlier, data from the Commerce Department showed Tuesday. The median forecast in a Bloomberg survey called for a 1.9 percent advance. Orders for business equipment were little changed last month, also weaker than projected. 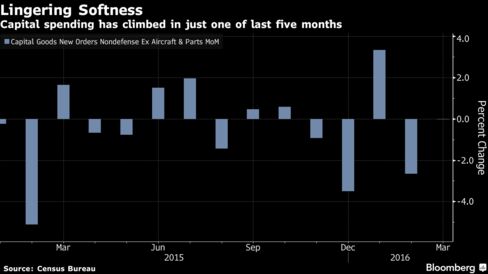 Two serious declines in three months is a situation worse than "softness," and Stilwell's content didn't provide any reason to believe that the situation won't keep "lingering" for some time.

At Reuters, Mutikani's C-minus came about despite strong factual reporting on the data. The problem is that two of her assertions failed to pass the smell test:

... most manufacturing surveys have painted a fairly upbeat picture of the sector in recent months.

... First-quarter gross domestic product growth estimates are as low as a 0.3 percent rate.

Neither statement is true. The "best" manufacturing survey news is from the Institute for Supply Management, whose survey just emerged from five months of contraction in March; that's one "month," not several "recent months." Regional surveys have generally ranged from worse to far worse than ISM's national survey.

First-quarter growth estimates at the time of Mutikani's report were as low as 0.1 percent, not 0.3 percent, as seen here in a graphic taken from Moody's High Frequency GDP model this morning. Today's news should cause that and perhaps other forecasts to drop into negative territory. The government's first release on first quarter growth (or lack thereof) will appear on Thursday morning.

Sadly, of the three reports reviewed here, the one with the most exposure will be Crutsinger's flunking flop at AP.