This sentence actually appeared at the web site of the San Jose Mercury News Monday afternoon regarding California's Democratic Governor Jerry Brown: "In his 2016 budget plan, the notoriously frugal governor warned that a $15 minimum wage would cost the state about $4 billion a year and risk plunging it back into the red." Yesterday, Governor Brown "sudden(ly) embraced" the $15 minimum wage.

At one time, Brown had a reputation for personal frugality, cultivating it well past its expiration date, even as he and his wife lived in a $1.8 million mansion before he became governor in 2010. He also recently had the state pay $2.5 milllion so he could move into the old governor's mansion. But in the context of reporter Matthew Artz's just-cited sentence, the average reader would surely come away believing that Brown is frugal with taxpayers' money. Hardly.

Any "frugality" Brown may still exhibit in personal and trivial state-related matters is dwarfed thousands of times over by several other items. Perhaps the worst example is the state's disastrous high-speed rail project, or what I would prefer to call the Big Bullet Train Dig.

When I last posted on the project 2-1/2 years ago, it was supposed to cost $68 billion, up from the $45 billion voters were promised when they approved a partial funding measure in 2008. The Associated Press reports that the first leg of construction won't be ready for riders until 2025. It has no chance of justifying itself on a standalone basis.

In 2012, an independent peer review panel said that "moving ahead on the high-speed rail project without credible sources of adequate funding represents a financial risk to California." The state's Democrat-dominated legislature approved the issuance of a measly $2.7 billion in bonds and approved starting the project anyway. There is no assurance that the required funding will ever materialize.

How is anything relating to the Big Bullet Train Dig "frugal"?

The state recent reported, thanks to its burgeoning pension liabilities, that it is $175 billion in red.

Almost all of California's major cities, and 35 in all, are sanctuary cities, meaning that law-abiding citizens have to incur extra costs to avoid becoming victims of illegal-immigrant criminals who are virtually free to roam their streets.

Two years ago, the Federation for American Immigration Reform estimated that "providing education, health care, law enforcement, and social and government services to illegal aliens and their dependents costs Californians $25.3 billion per year." It's hard for everyone else to be frugal when the state imposes $2,370 annually in related costs on the average California household headed by a U.S. citizen.

Thus, the idea that Jerry Brown is frugal with taxpayer money, something the Mercury News's Matthew Artz clearly intended to convey, is a joke.

But perhaps Artz was referring to "frugality" in another sense.

After all, the topic of Artz's article was Brown's "sudden embrace" of the statewide $15-per-hour minimum wage. His endorsement means that he's as frugal as anyone on earth with jobs and job opportunities.

Not once did Artz acknowledge the certainty that increasing the state's minimum wage from its current $10 an hour incrementally to $15 by 2022, and rising with inflation after that, will cost many workers their jobs. The closest he got was a mealy-mouthed statement from a Republican State Senator who only contended that "We have no way of knowing if this minimum wage hike will help or hurt workers and job growth, which California families need."

Horse manure. Experience has taught that a hike that steep "will help or hurt workers and job growth." The only question is how severely.

At least the Associated Press, despite its "could help, could cost jobs" headline, admiited to the likelihood of damage in the later paragraphs of its coverage of Brown's endorsement of the $15 an hour minimum yesterday: 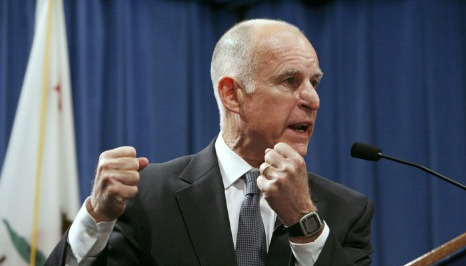 ... About 4 million workers in California earn wages in the $10 to $15 wage, according to calculations by Jeffrey Clemens, an economics professor at the University of California, San Diego. "The key question is what fraction of these workers will be lifted to the new minimum and what fraction will lose their jobs," Clemens wrote in an email.

Advocates for the wage increase and their economists put the number of affected workers at closer to 6 million.

... One leading economist on minimum wage issues said an increase from $10 to $15 would reduce employment among the least-skilled workers by at least 5 to 10 percent. But the impact on employment might be even bigger because employers would have to absorb significantly higher costs.

"I would go so far as to call this reckless," said David Neumark, an economics professor at the University of California, Irvine.

Neumark noted that the effects would vary by geography: In high-wage counties such as San Francisco and Santa Clara, about 22 percent of workers would get a raise. In places such as Fresno and Merced counties, about half the workers would see more money.

Correctly stated, the two sentences in the final excerpted paragraph should read "the remaining workers," not just "the workers."

If there are 6 million workers within the $10-$15 per hour range, the estimate above would tell us that employment among that cadre will fall by "at least" 300,000 to 600,000. But that's before taking "ripple effect" unemployment into account, referring to reduced employment up the entire pay chain among people who demand to get paid more because people in lower-level positions are getting paid more. Most will get it, but some will have to be seen as expendable, because employers won't have the money to please everyone.

Another paper not cited at either story by the aformentioned Prof. Clemens and Michael Wither looked at workforce participation and workforce mobility, summarizing the negative effects as follows:

We investigate the effects of recent federal minimum wage increases on the employment and income trajectories of low-skilled workers. While the wage distribution of low-skilled workers shifts as intended, the estimated effects on employment, income, and income growth are negative. We infer from our employment estimates that minimum wage increases reduced the national employment-to-population ratio by 0.7 percentage point between December 2006 and December 2012. As noted above, this accounts for 14 percent of the national decline in the employment-to-population ratio over this period.

The study was done of the period after the minimum wage was increased from 2007 through 2009 at much lower hourly rates, suggesting that the effect of California's $15-an-hour move, through spread over the next six years, will cumulatively be far more severe on that state's economy.

By the way, the 0.7 percent reduction in the employment-to-population ratio cited in the paper reduced employment nationwide by about 1.65 million jobs (.007 times the U.S. 16-and-over population of roughly 235 million).

So in a sense, Matthew Artz at the Mercury News is right. Jerry Brown is frugal — "notoriously" so — in making productive resources of people who want to work available to California's employers.

No wonder Dr. Merrill Matthews at the Institute for Policy Innovation is so pleased for his home state of Texas today:

The California Governor's Plan to Create More Jobs in Texas

As a Texan, let me say, "Thank you, Governor Brown!"

Texas has benefited immensely from the Golden State's determination to send its best employers and jobs to the Lone Star State, and it looks like those relocation efforts will continue--for years to come.

That's because Californians who are tired of how "notoriously frugal" Governor Brown and his Democratic Party comrades are in granting access to prosperous lives are moving to states which aren't as frugal in that regard.