The Associated Press's Christopher Weber, in an otherwise predictably passive-aggressive obituary, got one thing right: "The Reagans' mutual devotion over 52 years of marriage was legendary." How nice of him to acknowledge that now. The fact is that while it was visible during Ronald Reagan's presidency, everyone with eyes to see could recognize the special bond Nancy and husband Ron shared — except the condescending New York-Washington press corps, which as Weber noted, gave her "look of such steady adoration" a mocking moniker: "the gaze." Talk about "mean-spirited."

Confirmation that the press's deep cynicism about the Reagans' love for each other was way out of line was no more apparent than when Nancy released I Love You, Ronnie: The Letters of Ronald Reagan to Nancy Reagan in 2000. As one reviewer at Amazon.com wrote: "(This is about) a man and a woman deeply in love and totally committed to one another," showing that Ronald Reagan "never took his position(s) in government life so seriously that he lost his true core and his true heart."

That book's portrayal of Ronald Reagan through his letters was so overpowering that two leading establishment press figures felt the need to engage in immediate backtracking.

On September 9, days after the book's release, Washington Post Chairman Katharine Graham, CBS News's Mike Wallace and longtime Reagan friend and entertainer Merv Griffin came together on CNN's Larry King Live show to read some of Ron's letters to Nancy out loud and to comment on their relationship.

Here's some of what Wallace had to say, which clearly echoed how many of his other media colleagues saw the Reagans when they were in the White House: 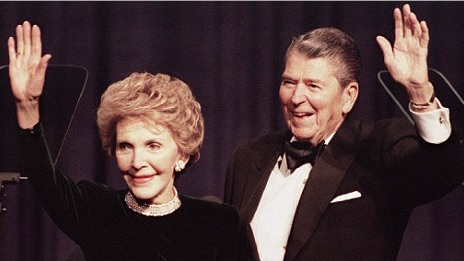 ... KING: Did you know, Mike, that he was that romantic? Wait until the audience starts hearing some of this.

WALLACE: I had no idea. I knew that they adored each other: she him and he her. But the stuff that you read here is -- it's extraordinary.

WALLACE: Oh, this is a -- this is a view of these two people I don't -- I have never really known, never, and I knew them fairly well. And no, this is -- this is quite strange in a peculiar way, really. It's a very revealing look at the two of them.

WALLACE: I'm sure that there are skeptics. Listen, I used to look at them when they were in public situations like this. And come on -- I mean, the adoring look and all of that, and the way that he looked at her. I used to say, come on, it couldn't be that. Turns out it was, and the letters make it so apparent.

Graham also backtracked, but a bit more mildly, when King ventured into trying to find a problem with the Reagans' penchant for letter-writing:

KING: This -- this constant need to express this.

Any thought of, Kay, why? Or was it just a romance that never ended?

GRAHAM: I didn't understand your question.

KING: His constant need to, you know -- she must know by this time he's madly in love with her. And he's writing another letter every day, reinforcing that.

GRAHAM: Oh, yes. Well, that was just to keep throwing vibes out to her about how much he loved her. And it was this habit of writing notes all the time. I mean, it's charming.

I can see why Graham didn't understand the question. Really, Larry? How could it be anything but "charming"?

Many in the establishment press were so blind that they couldn't or wouldn't recognize genuine love as it was displayed right in front of their eyes on a daily basis.