'Journalists' Deserve Most of the Blame for Newsroom Shrinkage

Columbia Journalism professor Dale Maharidge has produced a lengthy lament about the state of print and newsroom journalism, and how hard it's been on those forced out of their jobs. It's present online at The Nation, one of the far-left's flagships, and at BillMoyers.com, the web site of the former Johnson administration press secretary. The delusional Moyers believes that "We have an ideological press that's interested in the election of Republicans."

The title of Maharidge's mournful missive at Moyers' site asks a question: "What Happens to Journalists When No One Wants to Print Their Words Anymore?" The answer, Mr. Maharidge, is that when all of you had the chance, you failed to be reporters, and did so in the name of agenda-driven "journalism." You failed to give the public the basic information it had every right to expect, and in the process frequently demonstrated contempt for your audience. As a result, the public has largely tuned newspapers out, and they're not coming back.

Maharidge and those he interviews still don't get it, starting with how he introduces his piece.

Maharidge begins by comparing the plight of those whose careers have ended to Willy Loman in Arthur Miller's Death of a Salesman, a play Miller wrote in an attempt to discredit capitalism and the American Dream, and which the late Zig Ziglar accuarately characterized as a smear against salesmen across the land.

Following some statistical background, the final two paragraphs in the excerpt below get to the heart of the disconnect (bolds are mine throughout this post): 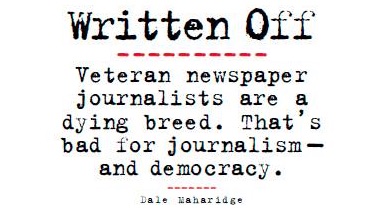 ... The term “seismic shift” is overused, but it applies to what’s happened to American newspapers. In 2007, there were 55,000 full-time journalists at nearly 1,400 daily papers; in 2015, there were 32,900, according to a census by the American Society of News Editors and the School of Journalism and Mass Communication at Florida International University. That doesn’t include the buyouts and layoffs last fall, like those at the Los Angeles Times, The Philadelphia Inquirer, and the New York Daily News, among others, and weeklies and magazines like National Geographic.

For most of the past century, journalists could rely on career stability. Newspapers were an intermediary between advertisers and the public; it was as if their presses printed money. The benefit of this near-monopoly was that newsrooms were heavily stocked with reporters and editors, most of them passionate about creating journalism that made a difference in their communities. It often meant union protection, lifetime employment, and pensions. Papers like the Sacramento Bee bragged to new hires in the 1980s that even during the Great Depression, the paper had never laid off journalists.

All of that is now yesterday’s birdcage lining. The sprawling lattice of local newsrooms is shrinking—105 newspapers closed in 2009 alone—whittled away by the rise of the Internet and decline of display ads, with the migration of classified advertising to Craigslist hitting particularly hard.

... Like the story of Willy Loman, cast aside in his creeping middle age, the tale of today’s discarded journalists is, at its core, a parable of the way our economy, our whole American way of being, sucks people dry and throws them away as their cultural and economic currency wanes. Many older workers, not just journalists, are hurting. Amid the so-called recovery, some 45 percent of those seeking jobs over the age of 55 have been looking six months or longer, according to the Bureau of Labor Statistics.

But there’s one major difference between other workers and journalists—when the latter are laid off, the commonweal suffers. “You know who loves this new day of the lack of journalism? Politicians. Businessmen. Nobody’s watching them anymore,” says Russ Kendall, a lifelong photojournalist and editor who is now self-employed as a pizza maker.

Note the reference to the "so-called recovery" in the second-last excerpted paragraph.

Sir, your colleagues in the press who are still working sing the praises of what you call a "so-called recovery" on a daily basis. They lower the bar for what constitutes acceptable economic progress constantly, and they do it for one and only one reason: to protect our leftist President and his (and their) leftist agenda.

The reality of how business is covered now compared to a decade ago when the President happened to be a Republican makes a mockery of the final excerpted paragraph.

While "journalists" were supposedly doing their jobs "watching them," but weren't, the predominantly Democratic and "progessive" politicians in America's major urban areas — the ones "served" by big-city dailies — pretty much had the run of things, as their cities' crime rates soared, their schools failed to perform, taxes skyrocketed, and millions fled to the suburbs while they took care of their cronies. The "commonweal suffered" mightily while "journalists" were largely asleep at the switch — or worse, cozying up to those who were ruining things. The "lack of journalism" Russ Kendall laments was a problem when the "journalists" were on the payroll. If they're not doing their jobs, why bother having them around?

Here's a small example of the corrupt mindset, written by a Cleveland Plain Dealer columnist in 2007 as he tried to compare the nobility of his calling to that of mere bloggers:

Riding with a candidate on a cold night in November, you can say to him: “Answer this question for me and I won’t quote you. I’ll quote myself and pretend I don’t know what you’re thinking.”

You get a lot of insight that way, through the back door.

But to get it, you have to earn trust. Trust that he knows you won’t blow his cover.

Since when are candidates, politicians, executives, bureaucrats, and others with power, responsibility, and the public trust entitled to have “cover”? Answer: When you've cozied up to them to the point that you're no longer anything resembling objective.

There's also the element of contempt for the audience, as articulated expertly by Thomas Lipscomb in a comment at the Moyers site. Lipscomb makes the point that "journalists" have failed because they didn't carry out the basic job of reporting:

When reporters become "journalists" they ignore the market which sustains their economic model and start worrying about their peers in the business and handing one another awards and citations. And the journalists being hired out of the hothouses of American academia today are so deracinated from the market they need to serve that it became chic to have contempt for it as a great mob of the unwashed clinging to its guns and bibles. No more uncredentialed rough-hewn geniuses need apply these days.

And the vital information the mass market used to expect from its newspapers, like the make up of the rioting teenaged crowd that trashed a shopping center yesterday, was carefully kept out of the paper as being possibly "divisive." This makes it impossible to calculate degrees of shopping risk, so retail sales and advertising dives and Amazon, which doesn't advertise, thrives.

In fact a lot of the stuff the mass market wants to see in the paper, as we know from a century's worth of market research has been pruned by elitists wanting to elevate the tone. This isn't surprising since more than 90% of people in the business are so far left politically from at least 50% of their market that the notion of balanced press coverage today is a bad joke.

Alas, the only award that counts is circulation. Pulitzer, Hearst, and Edward Bernays all understood this.

So now the "journalists" finally have the papers that cater to THEIR tastes and there just aren't enough journalists buying news papers to support the new business model.

... It's called suicide, folks. Stupid, unnecessary, and great impoverishment of our nation brought about by, of all people, the journalists themselves.

If these papers had been giving the public what it wanted, loyal audiences would have followed them into the digital arena. That hasn't happened, and it's mostly their own fault.