Tricia Bishop is back.

The Baltimore Sun deputy editorial page editor and columnist, who on January 7 advocated "a gun owner registry available to the public online — something like those for sex offenders," posted a follow-up on Friday, claiming that "Gun control advocates (are) the silent majority." Bishop is clearly put off by the ferocity of the blowback she received for advocating that the whole wide world — which she somehow forgets includes stalkers, leftist intimidators, criminals who would like to steal guns, and other criminals who would like to target the unarmed — should be able to know who does and doesn't own a gun in the U.S. Well, ma'am, you really didn't think that everyone you would like to expose for exercising their Second Amendment rights using a "model" similar to that employed for sex offenders would just sit there and take it, did you? 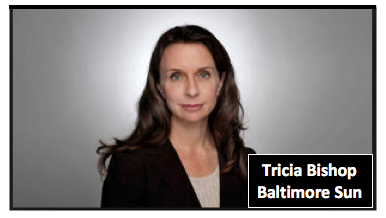 ... "Batten down the hatches," was the advice my editor gave after signing off on the admittedly provocative essay, which explored the idea of a searchable, public database of registered gun owners. He wasn't kidding.

They came at me via email, Twitter, Facebook, telephone and the U.S. Postal Service, attacking my looks, intelligence and parenting skills. They suggested multiple ways my child could be killed other than by guns and liberally used the f-word, b-word and c-word (at least once misspelled with a k) for emphasis. "Special kind of stupid" was a favorite put down (though I kind of liked "trollop" — you just don't hear that much anymore), as was questioning whether I was on my period (Hey Trump fans!).

Some were local, but many weren't. And a handful were thoughtful, respectful and earnest, with fair points to make. I tried to respond to those folks, though I may have missed some; I stopped reading the messages after a while. You can only take so much cyberbullying before it gets old.

While no one who believes in civil discourse would excuse profanity, sexism or threats directed at Bishop, here are a few points relating to her complaints:

Bishop then used her reader feedback experience to claim that gun owners are getting their way in the political realm because they're the ones who shout the loudest:

If these same gun owners lobby their legislators with half the passion they directed my way, it's not hard to see why they have been so successful in fighting gun control efforts.

And there's the takeaway: Those of us who claim to support gun reform efforts — the majority of the country, according to recent polls — have to be as loud or louder to be heard (though perhaps more civil). It's not enough to shed tears over the latest mass shooting or bemoan gun buying loopholes with like-minded friends. We've got to act. The gun owners, roughly a third of the population, sure do. Many are single issue voters who turn out for every election, proudly contribute to the NRA and wholly believe in their cause. Can we say the same?

... The time for action from that silent group is now. As Alec MacGillis, a former Sun reporter now with ProPublica, noted in a recent opinion piece, the gun lobby's power is waning: Gun ownership is concentrated in a smaller portion of the population, universal background legislation nearly passed in 2013, and more politicians are willing to take on the National Rifle Association.

New polling and study data are also making it clear that Americans not only want tighter controls on gun ownership but also more controllable guns.

Polls are often agenda-driven, Ms. Bishop. You of all people should know that.

But let's look at her two core claims anyway:

The CNN/ORC poll to which Bishop refers got its 67 percent by asking the following question (bolds are mine):

As you may know, President Obama this week announced several executive orders that change the nation's gun laws so that background checks are required for more purchases online and at gun shows, and which make it easier for the FBI to complete background checks efficiently. Overall, do you favor or oppose these changes?

The question is fundamentally bogus because it has a false premise, namely that Obama "changed the laws." Obama didn't do that, because he can't. The only way to "change a law" is through additional enacted legislation. A court ruling can only affirm a law or declare it unconstitutional.

Additionally, the use of the word "overall" is designed to elicit a far more positive response. If that word was not present, respondents would be more likely to say that they don't approve if they either don't like more background checks or would prefer not to make the FBI's job easier.

Demonstrating my point that using "overall" was designed to obtain an exaggerated positive response, there's no way to square that question's 67 percent result with the results of the following questions in that same poll:

I wonder how Bishop missed those pesky details? I'm not seeing a majority supporting gun control in the answers to those three questions.

As to the "gun ownership concentration" issue, the CNN/ORC poll supports the notion that gun ownership is becoming more widespread, not less.

Bishop's January 7 column referred to a 2003 review of gun ownership research indicating that "Published studies indicate that firearms are present in about one third of U.S. households." That's interesting, because the CNN/ORC poll asked respondents, "Do you or does anyone else in your household own a gun?" 40 percent answered "Yes."

40 percent now compared to "about one-third" early this century does not exemplify "waning." It exemplifies growth. It is consistent with my experience and surely that of many other readers here, namely that we know one or more people who have decided to buy a gun for the first time during the Obama era, many of whom have said that they never thought they would buy a gun, but they decided that they'd better do so while they still have the right.

Finally (and I'm sure this will annoy Tricia Bishop and the gun-grabbers to no end), it doesn't matter whether a majority of Americans do or don't support "gun reform efforts." As demonstrated in this post, a "searchable database" would most certainly infringe on gun owners' rights. Thus, what matters is that the Second Amendment of the Constitution says that "the right of the People to keep and bear arms shall not be infringed." As a result of the Supreme Court's Heller ruling confirming the obvious, namely that gun ownership is an individual right, if the advocates of "gun reform" want to lawfully change things — and that would include creating a "searchable database" — they will have to amend the Constitution.