The obvious pull quote of the day from President Obama's contentious press conference in Antalya, Turkey is this statement: "What I’m not interested in doing is posing or pursuing some notion of American leadership or America winning or whatever other slogans they come up with ..." Obama then claimed that any ideas coming from those who believe in such a notion have "no relationship to what is actually going to work to protect the American people and to protect the people in the region."

Ed Driscoll at PJ Media believes that these words are "the president’s equivalent of Carter’s malaise speech" in the 1970s. Just in case he's right, related stories at the Associated Press and the New York Times have not mentioned Obama's statement, a clear indicator of his lack of genuine resolve, in their coverage.

The closest Michael D. Shear and Peter Baker got at the Times (also saved here for future reference, fair use and discussion purposes) to referencing Obama's disinterest in "winning" was in Paragraph 21 of their 22-paragraph story. They used one word ("posing"). Here is that passage, including its preceding and subsequent paragraphs:

“If you have a handful of people who don’t mind dying, they can kill a lot of people,” Mr. Obama said. “That’s one of the challenges of terrorism. It’s not their sophistication or the particular weaponry that they possess. But it is the ideology they carry with them and their willingness to die.” 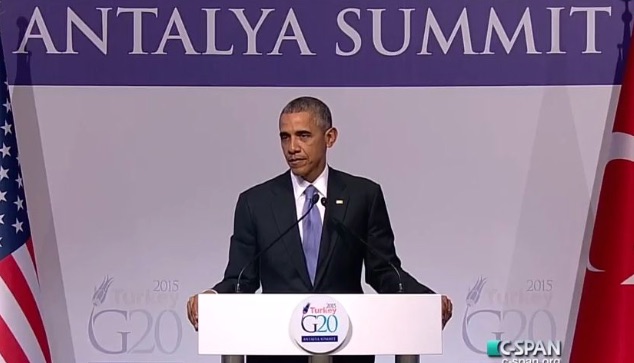 And he insisted that he has not shown any hesitation to act militarily, citing his approval of the raid that killed Osama bin Laden and his first-term decision to send tens of thousands of additional troops to Afghanistan. But he said he would not be pressured into “posing” as a tough president by doing things that will not make the situation better to satisfy his critics.

“Some of them seem to think that if I was just more bellicose in expressing what we’re doing, that that would make a difference,” he said. “Because that seems to be the only thing that they’re doing, is talking as if they’re tough.”

President Barack Obama on Monday conceded that the Paris terror attacks were a "terrible and sickening setback" in the fight against the Islamic State, but forcefully dismissed critics who have called for the U.S. to change or expand its military campaign against the extremists.

"The strategy that we are putting forward is the strategy that is ultimately is going to work," Obama said during a news conference at the close of two days of talks with world leaders. "It's going to take time."

The president grew irritated amid repeated questions about whether he had underestimated the strength of the Islamic State, which now appears to be focusing on targets outside its base in Syria and Iraq. In addition to the terror spree in Paris, the group has claimed responsibility for attacks in Lebanon and Turkey, as well as the downing of a Russian airline in Egypt.

The president said most of his critics are simply "talking as if they're tough" and offering no real ideas.

... Republicans and also some Democrats have challenged Obama's approach to the Islamic State, saying he lacks a clear strategy. The president's approach centers largely on airstrikes in Iraq and Syria, as well as programs to train and equip moderate opposition forces. He's also sent more than 3,000 troops to Iraq to assist that country's security forces and recently announced plans to send up to 50 Americans into Syria.

Here's a reminder concerning those airstrikes from back in May:

The U.S.-led airstrikes over Iraq during the first Gulf War averaged 953 strike sorties per day, according to the Air Force -- which said "only about 5 percent of the ... weapons released in those strikes were precision guided," meaning targets likely "required multiple strikes to meet the desired level of destruction."

According to the U.S.-led coalition to defeat ISIS, U.S. military aircraft carry out 80 percent of the strikes against ISIS and average 14 per day.

“The ultimate guidance rests in 1600 Pennsylvania Avenue,” he said. “We have been applying air power like a rain shower or a drizzle -- for it to be effective, it needs to be applied like a thunderstorm.”

Sen. John McCain, R-Ariz., recently complained that 75 percent of pilots are returning without dropping any ordnance, due to delays in decision-making up the chain of command.

In other words, unless things have changed in the past five months, the Obama administration is not conducting a serious effort. It's closer to a game of "let's pretend we're doing something so we can shut those warmongers up."

The AP later tried to deny that it sat on the story, claiming that it didn't have enough verification to run it, and that no one had requested that they hold it. Unfortunately for the wire service's virtually vanished credibility, another media outlet's reporter tweeted that it and the AP "had versions of it early & were asked not to publish til end of Iran talks." From that point on in relation to any coverage of the Middle East, terrorism, or even the Obama administration in general, the AP ceased having any claim to being an objective media outlet. The wire service is indeed the Administration's Press.

No form of the word "win" is at present at either story discussed here.

For those who don't recall it, Carter's July 15, 1979 "malaise" speech, more properly referred to as his "crisis of confidence" speech (he never actually uttered the word "malaise"), actually improved his presidential poll numbers for a time. That should be, but hasn't been treated as, a cautionary tale for any administration which focuses on "winning" every day instead of governing for the long-term. Largely because of that initial bump, the left still seriously believes that Carter's speech was a success, or should have been, if only the rubes who read, listened to or watched it were as smart as them.

It was no such thing, unless you define "success" as opening the door for your political opponent to defeat you (from Page 8 at link):

In her book The Moral Rhetoric of American Presidents, Colleen Shogun wrote, “Carter’s speech failed for two reasons. First, the substantive message...was incoherent and inconsistent. More importantly, the speech...failed because Carter attempted to use moral posturing to solve his political woes...at a time of...weakened legitimacy." Seen from the opposition party’s perspective, however, the speech was a gift wrapped in a bow. Richard Wirthlin, then Ronald Reagan’s pollster remarked, “I remember the exact moment I knew Ronald Reagan could beat Jimmy Carter. The date was July 15, 1979.”

The last thing anyone at the AP or the New York Times wants is for such history to repeat itself. Hence, as gatekeepers for the rest of the establishment press, they're ignoring our President's demonstrated disinterest in decisively defeating one of the most dangerous enemies civilization has yet seen.