The leftist press has despised Clarence Thomas ever since he fought off their attempt at what he properly characterized as a "high-tech lynching" to become a Supreme Court justice almost 24 years ago. It has worked to smear and discredit him ever since.

The latest such effort was posted online at the New York Times on Thursday and published in its Friday print edition. The online and print edition headlines at the piece by Adam Liptak, the paper's Supreme Court correspondent, made it appear as if the Times had discovered serious instances of plagiarism.

The online headline: "Clarence Thomas, a Supreme Court Justice of Few Words, Some Not His Own."

The print edition's headline was arguably worse: "A Justice of Few Words, a Number of Them Others'."

It will surprise absolutely no one that the facts don't support the thinly veiled contentions.

Here are the opening paragraphs of Liptak's ponderous 29-paragraph monument to agenda-driven journalism (bolds are mine throughout this post):

Justice Clarence Thomas has not asked a question from the Supreme Court bench since 2006. His majority opinions tend to be brisk, efficient and dutiful. 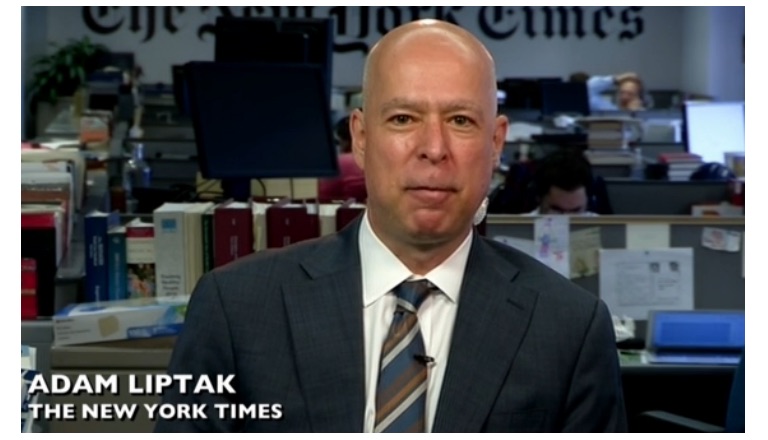 The findings that the taciturn justice’s opinions appear to rely heavily on the words of others do not suggest misconduct — legal writing often tracks source materials — but they do illuminate his distinctive role on the court.

Since his views on major legal questions can be idiosyncratic and unlikely to command a majority, he is particularly apt to be assigned the inconsequential and technical majority opinions that the justices call dogs. They often involve routine cases involving taxes, bankruptcy, pensions and patents, in which shared wording, including quotations from statutes and earlier decisions, is particularly common.

Justice Thomas’s seven majority opinions in the last term were on average just 12 pages long and contained little but a summary of the facts and terse summaries of the relevant statutes and precedents. Since opinions are signed by justices but often drafted by law clerks, it may be that any borrowed language was the work of Justice Thomas’s clerks.

When Justice Thomas announces his majority opinions from the bench, he sometimes seems to be reading from materials prepared by others.

So we're supposed to believe that Thomas is just a fringe player among the nine justices who rarely has an original thought of his own and has to lift others' work to get by. About the only thing lacking is a declaration that "Clarence Thomas is a lazy black man." As Instapundit's Glenn Reynolds tweeted Friday morning (HT Twitchy): "This is racism, straight up."

It's also racism without any factual basis. Liptak finally discloses Thomas's "highly unusual" rate of using language from other briefs in his 15th paragraph, thereby exposing the utter waste of time the reporter's entire effort was:

Over the years, the average rate of nearly identical language between a party’s brief and the majority opinion was 9.6 percent. Justice Thomas’s rate was 11.3 percent. Justice Sonia Sotomayor’s was 11 percent, and Justice Ruth Bader Ginsburg’s 10.5 percent. All three sometimes produce institutional prose.

Justice Elena Kagan, who has a livelier writing style than those three, had the lowest rate, at 7.1 percent; Chief Justice Roberts was in the middle, at 9.2 percent.

So Thomas's rate is impreceptively higher than Sotomayor's. I would expect that the Times, in fairness, will ensure that Liptak's next piece will be about her, with the following headline: "Wisdom of 'Wise Latina' Is Sometimes Not Her Own." Of course, that won't happen. Sotomayor is a fever-swamp leftist who rules in accordance with the Old Gray Lady's preferences far more often than not.

Thomas's and Sotomayor's disclosed rates work out to about one of every 9 words. The lowest rate, that of Kagan, is one in 14. The average is one in 11. This is worth 29 paragraphs of bandwidth and newsprint?

Orin Kerr at the Washington Post's Volokh Conspiracy blog has a far more detailed analysis of Liptak's report. Here are a few of Kerr's core contentions and observations:

... If you look at the data, though, they don’t support the conclusion that Justice Thomas is an outlier.

... it’s bizarre to say that his numbers are “unusually high,” that Thomas “relies heavily” on outside language or that “many” of his words are “not his own.” All of the Justices share language from the briefs at roughly similar rates: about 7 to 11 words out of 100. And the difference between Thomas and Sotomayor is a rounding error. It’s only 2.5 words out of 1,000.

... I don’t see how these studies (i.e., the one cited in detail in this post, plus two others Liptak used and which Kerr extensively reviewed — Ed.) support the Times’s presentation of Justice Thomas as an outlier.

That's because they don't.

Kerr showed that he completely understands the real goal of Liptak and the Times all too well earlier in his writeup:

... For the New York Times audience, it’s the kind of ideological catnip that is likely to make a lasting impression. No wonder it has been a main link on the Times homepage for most of the last day.

In other words, the paper is telling the knee-jerk leftist elitists who read it exactly what they want to hear — the facts be damned.