On Friday, in his desire to help his employer outdo Politifact as the last place to go for accurate fact-checking, the Associated Press's Josh Lederman "fact-checked" Jeb Bush's belief that the U.S. economy can grow annually at an average rate of 4 percent.

As seen in my Friday NewsBusters post, when the AP reporter "fact-checked" assertions that really are facts, specifically Bush's claim that during his two terms as Florida's governor the state added 1.3 million payroll jobs (actually, it was 1.5 million according to the federal government's more comprehensive Household Survey), he brought up irrelevant points that did nothing to change the absolute truth of what Bush said. But in reviewing Bush's 4 percent potential growth assertion, Lederman wasn't even evaluating a fact; he was instead "fact checking" a goal — one which has frequently been met in the past — and acted as if its future achievement is virtually impossible. 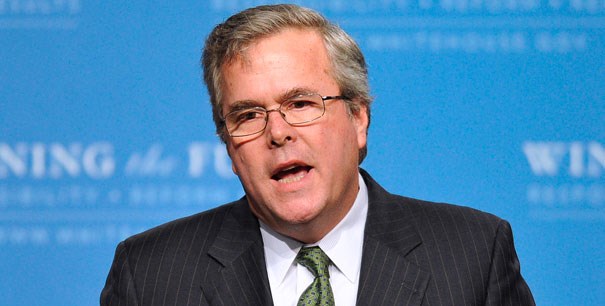 Here's what Lederman wrote. Keep in mind that at the beginning of his writeup, he claimed that he was taking "A look at some of the claims in the debate and how they compare with the facts" (bolds are mine throughout this post):

JEB BUSH, on his goal of 4 percent economic growth: "We can do this."

THE FACTS: Most economists say the U.S. under any president is unlikely to grow consistently at even close to 4 percent, largely due to the difficulty of overcoming decades-long trends.

Current forecasts put growth averaging half the rate of Bush's goal. To grow the economy faster, the country must either add more workers or increase their efficiency so their time on the job generates more income. The retirement of the baby boom generation will shrink the number of workers in the economy, making a huge increase of new employees unlikely.

Only four of the 16 presidential terms since World War II have experienced annual economic growth averaging more than 4 percent after inflation, according to research published last year by Princeton University economists Alan Blinder and Mark Watson.

"Most economists say" is not a statement of a contradictory fact; it is their supposedly informed belief against Bush's historically supported goal — and his own experience.

Before getting into the detail, let's note for the record that if it's really true that "Current forecasts put growth averaging half the rate of Bush's goal," i.e., 2 percent, we need to tear up the Social Security Trustees' most recent report, which assumed 2.6 percent. That 23 percent reduction in projected annual growth would pull the zero-out date for the so-called Social Security Trust Fund back by several years from the 2033 date cited in that report — and that's before considering problems in how "SSA's actuarial forecasts have been consistently overstating the financial health of the program's trust funds since 2000."

With that out of the way, Lederman appears to have relied heavily on a similar bogus "fact checking" critique of Bush's 4 percent growth goal made by AP economics writer Josh Boak in mid-Jume. He obviously ignored my critique of Boak's work.

Boak "cleverly" focused on full presidential terms, ignoring instances where four years of growth crossed terms — even if there was no change in the White House's occupant. This enabled him to recognize the full 4 percent-plus terms of Lyndon Baines Johnson (1965-1968) and Bill Clinton (1997-2000), while ignoring the 4.89 percent seen from 1983-1986 and the 4.61 percent which occurred from 1984-1987 — even though those performances, which occurred while Ronald Reagan was president, were a few tenths of a point better than those seen under Bill Clinton in the late-1990s.

Also more than a little relevant, as I wrote in June:

... there aren't too many people criticizing the Florida economy during his eight years as its governor. That's largely because it grew sharply during his two terms, while job growth was off the charts. The "fact" that "fact-checker" Josh Boak missed the information contained in the following chart shows how truly inadequate his effort really was:

Florida's economy grew at a compound annual rate of 4.35 percent while Jeb Bush was governor, including a truly torrid three-year stretch of almost 5.5 percent.

Maybe Jeb Bush really does know a little bit about how to grow an economy. To the predictable "well, that's nice for Florida, but it doesn't apply to the rest of the country," I would ask, "Why not?" Far from being a small experimental lab, Florida during the Bush era was the nation's fourth-largest state. Now it's third, leapfrogging New York in the past year or so.

So what Jeb Bush is asserting about the U.S. economy's potential is not without basis. Josh Lederman, and before him Josh Boak, are two of many people trying to sell us a mediocre "new normal." The only way leftist economic policies can survive is to lower the related performance benchmarks.

None of this has a flippin' thing to do with "fact checking." But it's apparently pretty important to the AP, which, as I also noted on Friday, seems determined to earn a new nickname: "Associated Politifact."