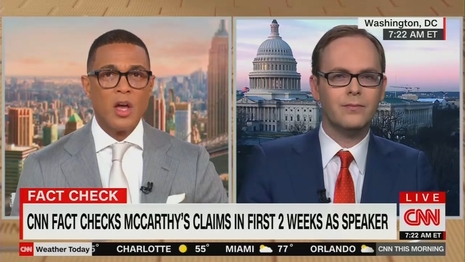 Don Lemon inspired giggles by claiming "The House speaker, Kevin McCarthy, has had his hands on the gavel for just over two weeks now, and if you're a person in power, you better believe your expert fact checker Daniel Dale is watching your words. Daniel, good morning. You found some of McCarthy's claims misleading and some are just plain wrong. "

Dale was arriving late on some of the other "independent fact checker" lines, like getting upset the Republicans claim they're cutting "87,000 IRS agents," when the Democrats will never let them. Dale said it was wrong for McCarthy to suggest the FBI could have gotten Trump's classified documents without a raid.

Dale began by suggesting it was "highly misleading" to compare the Republican push for some kind of "cap" on spending to Nancy Pelosi's negotiations with Trump in 2019, since Pelosi was negotiating a loosening of caps, and an end to caps in 2021. As usual, this is aggressive reading into what McCarthy said. How dare he suggest Pelosi would cap spending!

Stiles pointed out how Lemon sounds silly, since there's a tilt in the targeting:

Dale hasn't fact-checked Biden since Nov. 5. It's not as if Biden has stopped lying. For example, last month he claimed that when he was elected vice president (in 2008), his father urged him to give his ailing Uncle Frank a Purple Heart for his service in World War II. Biden's uncle died in 1999; his father passed in 2002. The White House didn't even try to defend or explain the fake story. During that time, Dale has published seven fact-checks involving claims by Donald Trump, Kevin McCarthy, and other Republican politicians—zero involving Democrats,

Under the McCarthy headline on the CNN "Facts First" page, you next can see:

CNN's fact squad leaned a little into fact-checking some Democrats in the last weeks of the midterms -- when they presumed more people might be checking on whether their targeting tilted toward the Republicans. But most of the time, Republicans face more checks and more rhetorical aggression than the Democrats from Daniel Dale and CNN.