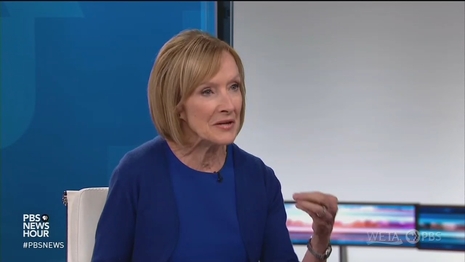 When the fact emerged that we've had two quarters of negative economic growth, marking a recession, the so-called "reality-based press" suddenly folded and let the Biden people "push back" at reality.

Let's talk about recession denialism. Recession denial is worse than "climate denial." There's a traditional definition by economists that now is all "informal" and "not definitive."

The networks made space for Team Biden to insist that there was no recession yet. PBS anchor Judy Woodruff suggested it was "not knowable" if we are in a recession, even though we know "growth is slowing." No, growth has stopped.

The TV networks were not alone. The biggest newspapers ran headlines talking about "recession fears" without admitting there was a recession. Associated Press reported the latest number was "raising fears that the nation may be approaching a recession," but "many economists do not regard it as constituting a recession."

The worst development was PolitiFact proclaiming it was "False" to say the Biden team was attempting to redefine recession, when that is an obvious factual claim. Enjoy the podcast below, or wherever you listen to podcasts.