On Friday, New York Times "fact checker" Linda Qiu evaluated claims made by Sen. Ted Cruz and former president Donald Trump at the NRA convention in Houston. Her nitpicking of Cruz as "misleading" and "exaggerating" was especially selective and shape-shifting at a time when the media is railing against Republicans for opposing gun controls. Qiu had three complaints, and this was the first: 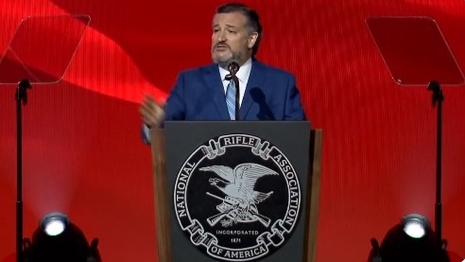 “Gun bans do not work. Look at Chicago. If they worked, Chicago wouldn’t be the murder hellhole that it has been for far too long.” — Senator Ted Cruz, Republican of Texas

This is misleading. Opponents of firearm restrictions frequently cite Chicago as a case study of why tough gun laws do little to prevent homicides. This argument, however, relies on faulty assumptions about the city’s gun laws and gun violence.

There were more gun murders in Chicago than in any other U.S. city in 2020, fueling the perception that it is the gun violence capital of the country. But Chicago is also the third-largest city in the country. Adjusted by population, the gun homicide rate was 25.2 per 100,000, the 26th highest in the country in 2020, according to data compiled by the gun control advocacy group Everytown for Gun Safety.

There's something comical in protesting "there's a perception that the city with the most gun murders is the gun violence capital." Qiu thinks you should look at nearby Gary, Indiana, which had 49 gun murders, but a higher homicide rate. The Dad joke is "if the Qiu doesn't fit, pick a different one."

The second complaint? Qiu took on Cruz claiming "the Department of Justice examined the effect of the ban and concluded it had zero statistically significant effect on violent crime.”

Qiu ruled this was "Exaggerated," because the study found that, if renewed, “the ban’s effects on gun violence are likely to be small at best and perhaps too small for reliable measurement” as assault weapons were rarely used in the crimes. It's "exaggeration" to say "zero effect" as opposed to "can't be reliably measured."  Somehow Cruz was "missing context." She quoted from one of the study's authors who told her in 2018 he had been misunderstood.

The third complaint? She quoted Cruz claiming "In 1972, the rate of per capita gun ownership in the United States was 43 percent. In 2021, the rate is 42 percent. The rate of gun ownership hasn’t changed. And yet acts of evil like we saw this week are on the rise.”

This was ruled "Misleading"...because once again, Qiu decided she didn't like that mode of measurement. "The per capita number of guns in the United States roughly doubled from 1968 to 2012, according to the Congressional Research Service." But that's not what he said.

Then Qiu finished by making Cruz's point, that another study shows the percentage of households owning guns has gone DOWN! "Historical surveys from the University of Chicago research center NORC show, however, that the percentage of American households that own guns has decreased from about half in the 1970s to about a third in recent years."

In the end, liberal journalists claiming conservative leaders are "misleading" or "exaggerating" when it's actually just liberals...."disagreeing." Liberals don't like conservative arguments, so they have to suggest "fact checkers" will get their credibility questioned and their audience reduced on social media.