Column: Heckling and Exploiting the State of the Union 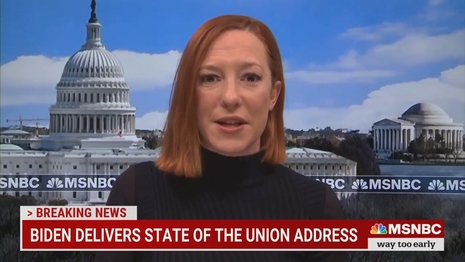 White House Press Secretary Jen Psaki appeared live on the MSNBC show Way Too Early at 5:45 on the morning after the State of the Union speech. Overall, the questions were cooked, over easy.

Host Jonathan Lemire underlined the speech was Biden’s biggest audience of the year, but he “made not one mention last night of the January 6 insurrection. Why is that?”

Psaki replied that yes, the speech is “hugely important,” but “it doesn't have the time to touch on everything that is a priority.” That’s a weird answer, since Biden spoke for 62 minutes.

Then Lemire asked about the ruckus over “a pair of Republican House members who chose to heckle President Biden as he was speaking about his late son Beau. Do you have any response to what they said?”

Psaki demurred. “During that heckling I was watching on TV with a group of my team members and colleagues, and we were all excited and cheering.”

Too many journalists employed this inaccurate verbiage on the order of speaking and heckling. Biden was speaking about soldiers getting cancer from serving in areas with toxic burn pits. He said “When they came home, many of the world’s fittest and best trained warriors were never the same. Headaches. Numbness. Dizziness. A cancer that would put them in a flag-draped coffin. I know.”

Rep. Lauren Boebert yelled “13 of them,” referring to the U.S. service members lost in a terrorist bombing in Kabul during the withdrawal from Afghanistan. The Democrats booed energetically. So Biden was heckled before Beau was mentioned.

Then Biden added “One of those soldiers was my son, Major Beau Biden,” and then he said "We don’t know for sure if a burn pit was the cause of his brain cancer." No one asks whether Beau was anywhere near burn pits in Iraq. No fact-checkers stir.

Heckling a president during the State of the Union (especially a Democrat president) is not polite or politically smart. But the liberal journalists who were scandalized by the heckling never take exception to Biden’s very repetitive citations of his son, so much it reeks of exploitation.

The president implied his son was a soldier among “the world’s fittest and best-trained warriors.” Beau Biden served honorably in Iraq in 2008 and 2009 (coinciding with Biden’s campaign for vice president.) But he served as a lawyer, as a major in the Judge Advocate General’s Corps.

More than a few conservatives drew a different inference. Biden made no explicit mention of Afghanistan or the American lives lost there, and so when Psaki said Biden “didn’t have time to touch on everything,” it sounded like there was no time in a 62-minute speech to mention those warriors. But there was time to work in Beau.

When the families of those 13 war dead assembled at Dover Air Force Base, several were disturbed by the president’s energetic citation of Beau. “When he just kept talking about his son so much, it was just — my interest was lost in that,” said Mark Schmitz. Biden also angered the families as he was also caught repeatedly looking at his watch as the bodies were unloaded one by one.

On the morning after the big speech, someone posted an edited video on Twitter that underscored how aggressively Biden has brought up his son’s death, with a slick set of choking-up-and-talking points. MSNBC and everyone else in the liberal media routinely enable this exercise...at the same time that they routinely ignore every scandalous new development about Hunter Biden, the son who can’t be painted as G.I. Joe.