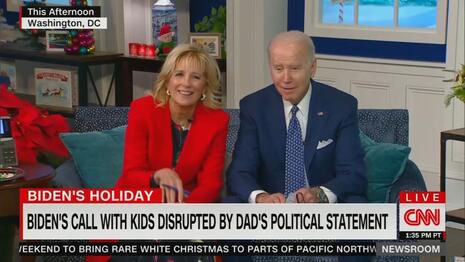 Katie Pavlich at Townhall reports that during a "Santa Tracker" event with the Bidens on Christmas Eve, a parent ended his conversation with by saying, "Let's Go Brandon." Biden then said it back, like he didn't know what it means. Reporters expressed anger.

On Friday afternoon, CNN anchor Boris Sanchez denounced the rude behavior, and then CNN senior political analyst Ron Brownstein said it was about "insurrection" and the "Big Lie" that the Republican base thinks Biden isn't a legitimate president. (CNN never considered Trump legitimate.)

CNN is PISSED that a parent would say "Let's Go Brandon" to Biden directly. Analyst says it's ungracious. It's juvenile. It's reprehensible...and (this is CNN)...it's about "insurrection." pic.twitter.com/vRRIZagEvb

This was supposed to be a tidy publicity event to make the Bidens look wonderful. CNN White House reporter Jeremy Diamond was furious:

If you think it’s appropriate to tell someone — anyone, really — to go f*** themselves after they gave your kids the time of day on Christmas Eve, it says a lot more about your personal character than anything else
That is all.

Somehow the guy is the true victim, and Biden was somehow in the wrong, as a guy gets on the phone to troll him on Christmas Eve after Biden was kind to the guy https://t.co/6DICyql7iN

Our own Curtis Houck then gave CNN's Diamond the media-bias lesson on how CNN wasn't upset when it happened to Trump (on non-holidays).

There's also this one where a host on YOUR network gave a rave review to a play that murdered Trump https://t.co/tWez1JMbfU

Drew Holden brought his usual roundup to the table:

Like the rest of the weak-kneed closet libs I reflexively and dispositionally find the Let’s Go Brandon thing a bit Icky but I can’t bring myself to really care because of the unhinged lunacy the corporate press always generates in response. pic.twitter.com/8aBTjFYK2S

ABC News chose the headline "Father uses vulgar insult during holiday call with President Joe Biden." Technically, this is not accurate, since there is no vulgarity in "Let's Go Brandon."

A man used a vulgar insult for the president when calling into a Christmas event on Friday and speaking with President Joe Biden and first lady Jill Biden...

Operators do not screen participants for political affiliation before connecting them with the president, who sometimes will surprise callers on Christmas Eve, according to a NORAD official....

When a child calls in during such a time, an operator usually asks to talk to a parent to be sure they are OK with their child talking to the president -- but they do not ask political questions of the parent or otherwise try to screen them by political affiliation, the official said.

They do not ask since it is not a political event and because the vast majority of callers are not the type to be on the "naughty list," the official said.

Back in 2018, CNN used the exact same non-political publicity event to mock Trump for asking a 7-year-old if he still believed in Santa. He said to the kid "At seven, it's marginal, right?" At CNN, it was okay back then to exploit this event in a politically embarrassing way. What an oaf, that Trump!

President Donald Trump did the unthinkable while taking calls about Santa on Christmas Eve: He asked a young girl if Santa Claus was real.

Seated in front a roaring fireplace in the White House State Room, the president asked a 7-year-old named Collman if she was "still a believer," possibly shaking the young girl's faith in Saint Nick forever....

Trump may have been in a gloomy mood due to the ongoing government shutdown and the recent stock market selloff, but he appeared cheerful in subsequent calls.

NBC News noted this was true to form for Trump, who enjoys "shattering illusions."

But something she said apparently amused Trump, who chuckled as he listened. (Thousands of people on social media were less amused, worried that children — presumably under 7 — would have their beliefs punctured by a president who often appears to enjoy shattering illusions.)

....As it was, Collman was lucky to have gotten through, considering that much of the government is shut down because of a dispute between Trump and Congress over his demand for a border wall.