Is there anything funnier than CNN complaining about "over the top" negative coverage? On Sunday's Reliable Sources, host Brian Stelter came rushing to Joe Biden's defense, complaining about hyper-critical coverage of the fiasco in Afghanistan. You could never be critical enough of Trump, and Biden should be granted a wide berth. Stelter began: 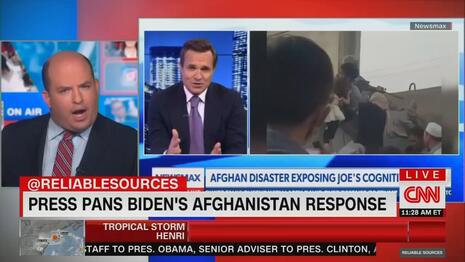 STELTER: Everyone has an opinion about the media's coverage of Afghanistan, the withdrawal and the Biden administration. So let's get into it. 'Knives out for Biden,' Tucker Carlson said, claiming the press has turned on the president. Carlson spun it as a conspiracy theory, of course, but the critical tone of the coverage has been obvious to everyone.

I'm not talking about far right-wing coverage, which has been predictably over the top. There was a Newsmax segment that alleged the Afghan mess exposed quote, "Joe's cognitive issues." They don't even have enough respect for him to call him the president.

Disrespecting the president? You almost want to shake Stelter by the lapels and tell him: "Three weeks ago, you were comparing Trump to death cult leader Jim Jones!"

At this point four years ago, Stelter was using the Charlottesville rioting to underline Trump was "crazy" and unfit for office. He hammered on Trump's "mental unfitness" so often that it just became part of the Stelter patter, that we routinely summarized his weekly rants as Trump was a "mentally unstable authoritarian."

It's a little bit amazing that @BrianStelter thinks Newsmax is out of line for questioning "Joe's cognitive issues," and disrespects the president.

It's like he has a bad case of amnesia, like he didn't constantly question Trump's cognitive issues and compare him to Hitler. pic.twitter.com/J0IO6fNivW

Stelter went out to tout HuffPost, another hothouse of liberal opinion. "But the mainstream media's tone has also been scathing. I heard complaints from Biden's aides about this. So did Daniel Marans of Huffpost, who wrote that Biden, quote 'has stuck to his guns while under attack in the press, laying out a case for the limits of American military power.'" Stelter couldn't even finish the sentence he was quoting. But the point was clear: the media was too tough on this president. A Democrat president.

Since the usual gathering of Stelter guests ranger from A to ACLU, he turned to fellow Trump-hater Matthew Dowd and screechy feminist Amanda Marcotte.

Biden’s handling of Afghanistan is a success. @MatthewJDowd on @ReliableSources: “The press has a tendency to judge things by anecdotes” but “data for the last week shows Joe Biden has basically gotten 30,000 people out of Afghanistan without a single loss of an American life.” pic.twitter.com/DxqSl8yFNY

Amnesia like Stelter's was spreading. WHO is over the top? Matthew Dowd recently claimed "January 6th was worse than 9/11." Amanda Marcotte called Hallmark Channel rom-coms “the platonic ideal of fascist propaganda.”

Dowd thinks everyone should "support Biden vigorously." That's why he's a regular on CNN and MSNBC. 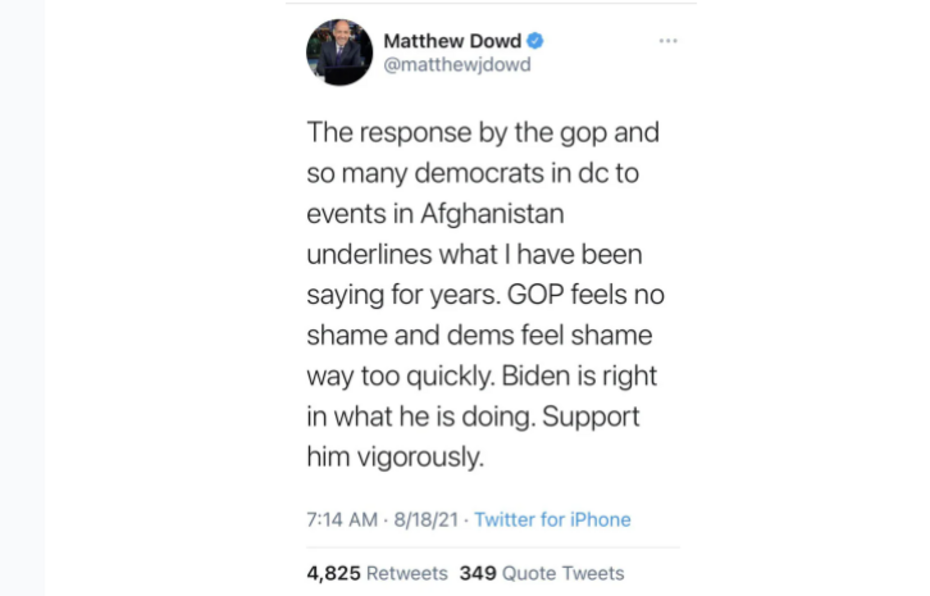