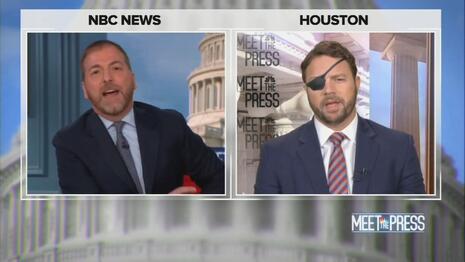 On the latest NewsBusters Podcast, we discuss the really viral exchange from Sunday's Meet the Press, when NBC host Chuck Todd pushed and prodded and attempted to shame Rep. Dan Crenshaw over the allegedly sorry state of the GOP, and Crenshaw upset him by saying journalists are all liberals. Todd call that the "laziest" answer, but the laziest approach is never reflecting on how liberal you sound on television.

Then Todd turned around and granted a very receptive audience to Trump-trashing Republican Adam Kinzinger. Todd asked Crenshaw why anyone should believe a word he says. Kinzinger was automatically believable because he hates Trump. Todd interrupted Crenshaw and fought with him. Kinzinger was allowed to speak for a minute or more without interruption. Todd pulled the same trick with anti-Trump Republican Brendan Buck in the pundit panel. Please speak for as long as you want, as long as it's anti-Trump and speaking doom about the GOP future.

On a similar partisan front on Sunday, CNN Reliable Sources host Brian Stelter organized a segment around how the media really needed a "democracy beat" to investigate and decry voter-suppressing Republicans. His guest Ari Berman of Mother Jones explicitly said our American divide isn't Republicans vs. Democrats, it's Republicans vs. Democracy. Liberals always claim they're the protectors of democracy, but it's amazing how much they don't want conservatives to talk on television. Imagine the world run only by Stelter's agreeable guests on Reliable Sources.

Enjoy this podcast below, or listen wherever you find your podcasts.