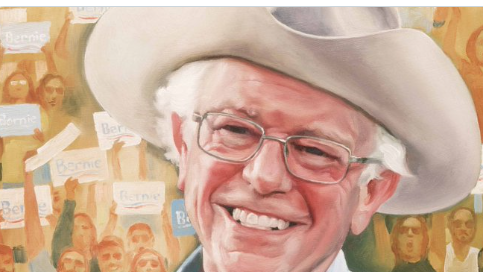 Why pick this man to try this lame thesis? This is the same Tanenhaus who wrote a book predicting The Death of Conservatism in 2009. The next year, a Tea Party surge took over the House majority. He stinks at forecasting.

The Reagan of the left

Bernie Sanders remade his party with a youth movement he built from the outside. Just like the Gipper did.

The headline inside on B4 underlined it: "They began as insurgents. Their ideas became mainstream." Tanenhaus knows how implausible this sounds:

The comparison looks implausible. The genial, soothing, archconservative Reagan, with his Hollywood polish, script-reading skills and two terms as governor of California, seems a long way from the cantankerous socialist senator, with his accent scraped off the Brooklyn sidewalks and his following formed in tiny, remote, hippie Vermont.

They're apparently similar because they were both considered "fringe," and the major parties considered them ruinous. But will both of them win the White House?

That's why it's funny that he tries to make a case for the Bernie Bros by quoting Rep. John Anderson in 1974 attacking Reagan...um, very much like Tanenhaus did in the Obama years.

“Extremist fringe elements seek to expel the rest of us from the GOP,” John Anderson, a high-ranking Republican congressman, warned when Reaganites began to make inroads into the party. “If the purists stage their ideological coup d’etat, our party will be consigned to the historical junk heap.”

Anyone who reads all the way through this should be most amused at how Tanenhaus suggests Sanders is going to find new voters...in the Republican Party.

Can the "Reagan Democrats" of 1980 become the "Sanders Republicans" in 2020? Not if 90 percent or more of Republicans continue to support Trump. The only hope will be to shake loose independents weary of Trump or catch the fire of Sanders' truly populist crusade....

Even if he fails to win the nomination or, if he gets it, the general election, he will have remade the party in anticipation of the time when demographics catch up with his vision and turn important red states blue. Then the new Democratic Party may look back at the spoiler and outlier Sanders, the “extremist” whom “nobody likes,” as the most persuasive voice for a politics of hope in an age dominated by fear.

Conservatives mock the idea that socialists like Sanders are for "hope," and they are for "fear." Sanders thrives on fear -- fear of climate disaster, fear of dying while uninsured, fear of Social Security and Medicare cuts, and so on.

At least this puts Sanders on the far left, unlike other silly Outlook section articles like last year's "Barack Obama. conservative."