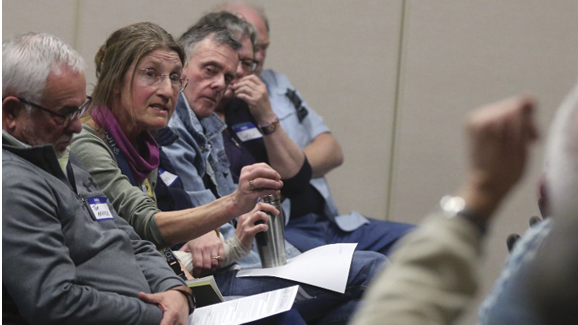 Something rare happened in The Washington Post on Monday: there was a small hearing of the argument that the media is biased to the Left. Post media columnist Margaret Sullivan penned a column praising the Casper Project in Wyoming, where the Society of Professional Journalists tried to engage with media people and 36 Casper-area "citizen volunteers" who met on several occasions to "try for some mutual understanding."

So they should expect the bias complaint to surface:

The final session, a public event at Casper College in July, included staffers from The Washington Post, BuzzFeed News, the Wall Street Journal and the Associated Press.

Things got a little tense at times.

At one point, Chuck Hawley, a Casper real estate agent and broker, who was one of the larger program’s participants, tried to pin down the panel members on what he considered a given.

Hawley asked for a show of hands from those journalists who accept that there is a liberal media bias that works against President Trump and conservative values.

What journalist with two eyes and two ears thinks they are not "working against President Trump" at this point?? That would make it tense! Sullivan continued:

Writing afterward in the Casper Star-Tribune, the state’s largest newspaper, Hawley professed his shock: “Not one of these editors was willing to admit to what most view as an obvious and overt liberal bias in reporting.”

Hawley’s piece went on to provide examples: “Articles referring to pro-abortion individuals as ‘pro-choice activists’ versus pro-life believers as ‘individuals with an antiabortion agenda,’ two years of stories and accusations of Russia collusion by Trump and his administration, questioning Trump’s mental competence . . .” among many others.

(His complaints are subject to challenge, I’ll note. For instance, most large news organizations have rules on abortion-related language in news stories that address his complaint; many, including the Associated Press, recommend against the use of “pro-choice” — despite the preference of those on that side of the divide — suggesting instead “pro abortion rights.”)

What’s worse, in Hawley’s view: “The real bias is not what the media prints and airs nightly, but rather what they don’t: Conservative viewpoints are ignored or slanted if it does not fit a liberal narrative.”

Sullivan is right that "pro-choice" is now discouraged, but changing it to the less nebulous "pro-abortion rights" while their opponents are "anti-abortion" is not exactly challenging Hawley's argument that liberals are "pros" and conservatives are "antis."

I would never want to discourage liberal reporters from engaging with people who don't trust them. It might help journalists with their frustration that people don't understand some of the (often sneaky) methods that journalists use, like anonymous sourcing. Although knowing how it's done doesn't make the news-manufacturing any less opaque for the audience.

This passage made me smirk:

And Lori Montgomery, deputy national editor of The Post, came away from Casper realizing anew how upset people — regardless of political leaning — are with the deep divisions in American society: “Part of the anger with the mainstream media is that they see us fanning those flames.”

Maybe, Montgomery told me, “we should ask ourselves whether we could do more to heal those wounds,” while still serving in the all-important watchdog role and still covering important news events without flinching.

One of the report’s recommendations is that journalists should engage with their audience more regularly. Hear them out. Talk to them.

Yes, Posties, you "fan the flames" with hot slogans about Democracy Dying and raging against this president and anyone who doesn't have their hair on fire in opposition to him.

But I smirk hardest at the idea that maybe the Post could engage more with readers, when current Post editor Martin Baron came to town in 2013 and quickly abolished the ombudsman position, which engaged with reader complaints. Instead, the Post offered Sullivan (the former New York Times ombudsman) writing angry columns about people distrusting what she calls "the reality-based press."

The Casper Project issued a report with recommendations, and we can see why Sullivan would skip over that list, after this one:

SEEK OUT BIAS: Consider ways to make opinion more distinct from news. Make sure reporters who go on TV news shows know how to avoid getting drawn into giving their own opinion.

This is how Hawley's article concluded, and we add an Amen:

Until such time that journalists (including the panelists who attended the forum) have the courage to raise their hand when asked if they agree that liberal bias exists in the media, and are willing to hold themselves accountable for biased/inaccurate reporting, the media will not regain public confidence, and the 32 percent trust number will only continue to decline.