New York Times Forced to Correct at Notre Dame: 'Body of Christ' Is NOT a Statue

Mark Hemingway in the New York Post reported The New York Times is not in touch with Catholic lingo -- which became very obvious in a story on the Notre Dame fire. Times reporter Elian Peltier reported on the chaplain for the Paris Fire Department and his efforts to save relics and treasures during the fire. 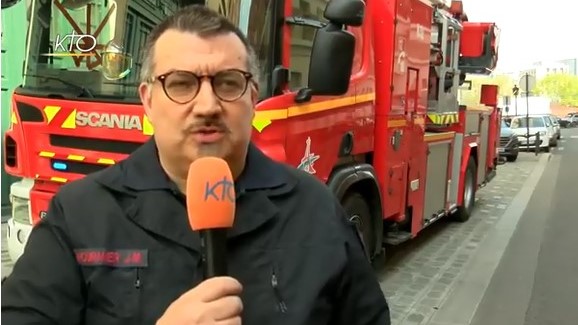 “I had two priorities: to save the crown of thorns and a statue of Jesus,” the Grey Lady quoted him. The story was full of gripping details about the scramble to preserve this statue.

“As the chaplain began removing a statue of Jesus, he said, his colleagues were fighting the fire from the cathedral’s towers,” the paper reported. “With the statue in hand, Father Fournier, alone in the nave, gave a benediction to the cathedral, he said.”

But, oops -- there was no statue of Jesus in the cathedral. The priest was referring to the "body of Christ," the consecrated communion hosts. (Peltier speaks, and tweets, in French, so it was not a translation error.) Here is a similar account from a TV interview Father Fournier gave.

The Times later appended a correction to their story: “An earlier version of this article misidentified one of two objects recovered from Notre-Dame by the Rev. Jean-Marc Fournier. It was the Blessed Sacrament, not a statue of Jesus.” The story now says "the consecrated bread and wine of the Eucharist."

Hemingway also listed a pile of other examples of the Times missing the barge on Christianity, including:

it’s hard to top this correction the venerable paper ran in 2013: “An earlier version of this article mischaracterized the Christian holiday of Easter. It is the celebration of Jesus’ resurrection from the dead, not his resurrection into heaven.”

A reporter for the paper had apparently confused the resurrection with the ascension into heaven.

The following year, the paper once again botched the resurrection in an article on Israeli tourism. “Nearby, the vast Church of the Holy Sepulcher marking the site where many Christians believe Jesus is buried, usually packed with pilgrims, was echoing and empty,” observed the Times.

Again, the whole point of the resurrection is that Jesus rose from his tomb. He isn’t buried anywhere.

This kind of tin ear can be easy to spot around a big news story on a cathedral. On Twitter on Friday, actress Patricia Heaton mocked an Associated Press headline "Tourist mecca Notre Dame also revered as a place of worship."

Thanks ⁦@AP⁩ - I had no idea #NotreDame was “also” a place of worship - love your investigative journalism!