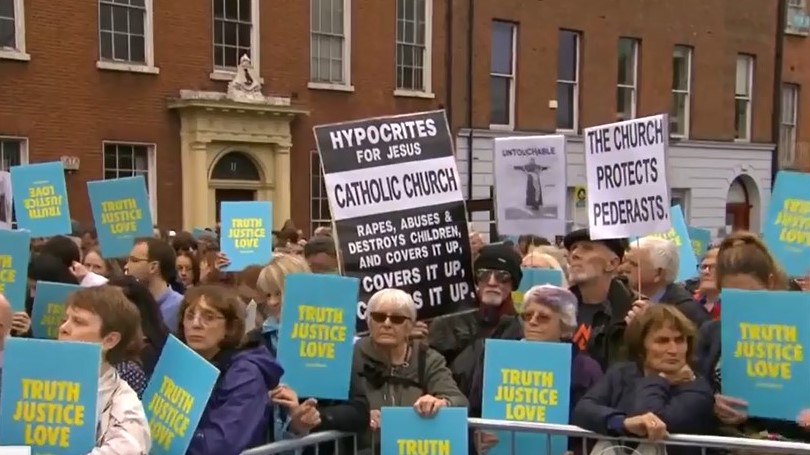 NPR was eager to spotlight enemies of the Catholic Church saying "Nope to the Pope" during his visit to Ireland. After a somewhat balanced news report, All Things Considered weekend anchor Michel Martin supportively interviewed a left-wing secularizer named Lisa Breslin. The online headline was:

'He Needs To Be Accountable,' Says 'Nope To The Pope' Activist

Martin wasn't holding the Left accountable for smears. Get a load of the loaded rhetoric coming out of Breslin's mouth, making the church sound like an episode of Game of Thrones:

MICHEL MARTIN: Breslin told me earlier why she'd like Francis to face an empty park.

LISA BRESLIN: I suppose it's a new Ireland. It's not the Ireland it was in 1979 when the last pope was here. Somebody - him - he needs to be accountable for all of the undeniable abundance of abuse cases - and not just those cases, but it's years and generations of torture, neglect and murder by this church.

Accusations against the Catholic hiearchy of tolerating and covering up sexual abuse by priests are bad enough without charges of "murder." (NPR highlighted that wild charge in another story.) What could Breslin be talking about? Martin didn't care. She just kept supportively prompting the leftist into declaring her demand for removing religion from the public sphere:

MARTIN: Is this a specific response to the many cases of abuse of people by clergy that have come out in recent years, or is it a broader point that you're trying to make?

BRESLIN: Yeah, it's a much broader point. I think the clerical sex abuse cases is absolutely, like, one of the most important points. But Ireland itself is - we're at a crucial time in Ireland. This is not just about abuse cases. We need, in Ireland, a complete separation between church and state. And we think every human has the right for freedom of conscience and belief in a religion for both religious people and nonreligious people. And our country is so diverse now that we should be encouraging and operating for the good of all based on human rights, rather than religion.

Martin pointed out the Ireland has legalized abortion and same-sex marriage, but Breslin complained the Catholics "still do have a hold over our hospitals and our schools."

Martin concluded by asking Breslin if there was some event in her past that caused her rebellion against the church, and Breslin started talking about "hostages" taken by the church:

BRESLIN: A lot of my family are devout Catholics. My grandmother is absolutely awfully ashamed at my protest, and I've embarrassed her. And I think me, as a person, it's just how I grew up and how I progress and how I feel. This is how I've felt from a very young age, and a lot of people in Ireland feel the same. They feel like they're hostages of a religion they don't want to be part of. And I'm one of those people.

On Weekend Edition Sunday, NPR tilted the interviewing field again when anchor Melissa Block talked to Irish sexual-abuse survivor Darren McGavin, who despite all his suffering at the hands of a notoriously abusive priest, didn't loosely accuse the Catholic Church of "murder."