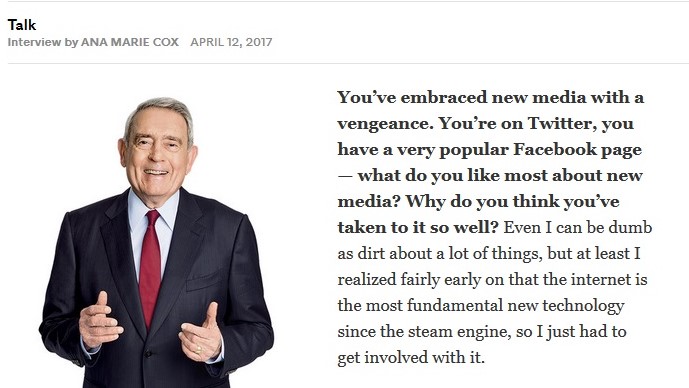 Disgraced CBS anchor Dan Rather is being honored by the “legacy” media again, in an interview with Ana Marie Cox for this Sunday’s New York Times Magazine. Cox can’t describe what actually brought Rather his disgrace, only that he was an “early target of internet fact-finding.” As if George W. Bush wasn’t a target of Rather’s?

COX: Do you think that being an early target of internet fact-finding, after the controversy over your reporting on George W. Bush’s military service, gives you a perspective on using new media now that other people might not have?

RATHER: I realized a long time ago that some days in journalism go badly.

That's it. Perhaps they spared us the usual "the story is still true" baloney. But then Cox treats him like a Wise Man on the future of journalism, as if asking the makers of the Titanic about the future of shipbuilding:

COX: A lot of people are talking about a crisis in journalism — whether it’s having to do with continuing to have a bumpy transition from the old media to the new, or the specific challenges that journalists face in an era when people say there are “alternative facts.” Do you think journalism is in trouble?

Then he offers the usual bromides on finding a new financial model to fund reporting. Dear New York Times: this guy is not a caretaker of facts. Rather has "Alternative Facts" written all over him! This kind of exercise is exactly why "mainstream" media can't lecture us about facts, when it honors this guy. The Times is trying to rebuild the Rather brand and compromise its own integrity -- if it has any. Then came the objectivity question:

COX: A lot of people argue that one guideline for journalism should be objectivity, but your recent work is very opinionated. Is that still journalism?

RATHER:  I certainly hope it is. I do news analysis and commentary. I don’t always succeed, but I try to avoid an actual editorial that proposes a course of action.

Baloney. Most of his Facebook posts are commentaries, not reporting. Cox alluded to it in asking about the terror of living under Trump:

COX: After James Comey testified about Russian interference in the 2016 election, you wrote a Facebook post that began, “If you are a praying person, today is a day to pray for the future of your country.” [That would be a course of action.] You’ve been reporting the news for a long time — how scared should people be?

RATHER: I don’t believe in being scared. I’m an optimist by experience and by nature, and I’m optimistic about the country. But I’m very worried about some of the things that are happening now. In my humble opinion — and I do mean humble — we need some grit and resolve, hope, healing. We need patriotism, but we have to understand the difference between patriotism and nationalism.

Cox then played dumb strawberry-blonde and pretended Rather is "famous for doing really tough interviews." Yes, he yelled at George H.W. Bush, but Cox ignores many embarrassing sessions of softball, including every sitdown with the Clintons, and some embarrassing chats with Saddam Hussein.

COX: You’re famous for doing really tough interviews — what are your interviewing tips that other people might be able to use?

RATHER: The first three keys to doing a good interview are homework, homework and homework. And to be a good listener. The bulk of your questions should be based on what you hear from the interview subject. I do every interview trying to concentrate on having clear eyes, an inquiring mind and an open heart. That’s a paraphrase of what the coach in Friday Night Lights told his players.

Cox began this softball interview by praising his new-media savvy and popularity, so he played the aw-shucks card:

COX: You’ve embraced new media with a vengeance. You’re on Twitter, you have a very popular Facebook page — what do you like most about new media? Why do you think you’ve taken to it so well?

RATHER: Even I can be dumb as dirt about a lot of things, but at least I realized fairly early on that the internet is the most fundamental new technology since the steam engine, so I just had to get involved with it.

Or he could be saying: At my age and with my damaged brand, these websites are the best way to get an occasional hommage.