GQ magazine is already in the tank for Obama. Editor Jim Nelson declared him “Mount Rushmore great” in an article titled “Why Obama Will Go Down as One of the Greatest Presidents of All Time.” 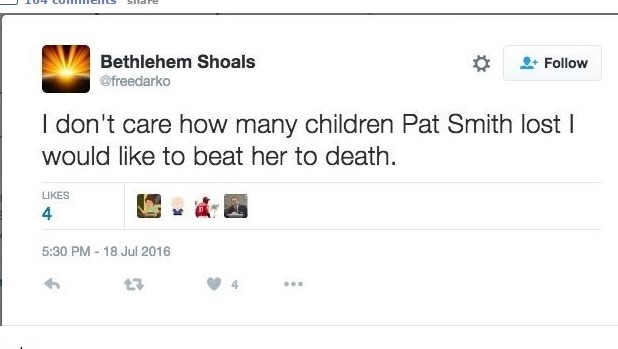 There were pangs of regret in the first half-hour after the post. 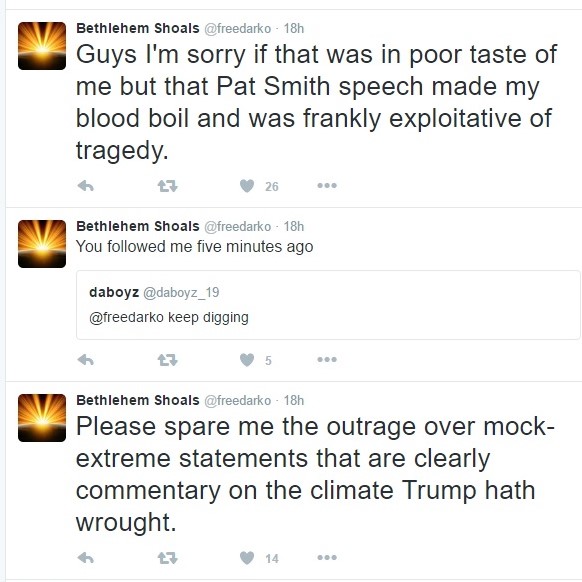 Naturally, conservatives complained and sent it around, which made him more unapologetic, at least to the right-wingers. when morning came around:

Then came the half-admission a couple of hours later that he was wrong:

On Tuesday afternoon, Shoals posted a full and contrite apology on Medium:

Last night, when Pat Smith was speaking onstage at the Republication National Convention, I tweeted that “no matter how many children she’s lost, I’d like to beat her to death.” That’s what I said, and I accept full responsibility for my actions and their consequences.

Why did I do it? It certainly wasn’t intended as a literal threat on a woman’s life. If anything, it was an extremely ill-advised attempt at satirizing the overall climate of the RNC. But with that kind of hateful language, an explanation just turns into rationalization.

I certainly didn’t help the situation by getting defensive and suggesting that Twitter, vile as it can be, is already a hotbed for this kind of discourse, or by arguing that my track record and reputation as a writer could provide any exculpatory context. Because what matters is that I said it. And I wish I could take it back.

Under no circumstances is it okay to invoke violence against women. As outraged as I was by parts of Pat Smith’s speech, to use this kind of language as a means of expressing that feeling was completely out of bounds. I also completely understand how, regardless of my intent, it was extremely triggering for a lot of people. And for that I am genuinely sorry.

The apology is good, because the tweet was in extremely bad taste, even as a "satirical" adventure.