James Taranto at The Wall Street Journal had some fun with President Obama earlier in the week, matching headlines:

“Barack Obama and Bryan Cranston on the Roles of a Lifetime”—headline, New York Times, May 8

The White House called up the Times and suggested their cozy "Table for Three" feature be arranged with Bryan Cranston, who is playing President Lyndon Johnson in a forthcoming TV movie. Times writer Philip Galanes brought the usual fan-club tone. "Mr. President, I have to tell you: Right now I’m sweating. Does it bum you out to be the guy who stresses out most people he meets?" Obama replied "Actually, I’m very easygoing."

This exchange was the most unctuous genuflection of the feature: 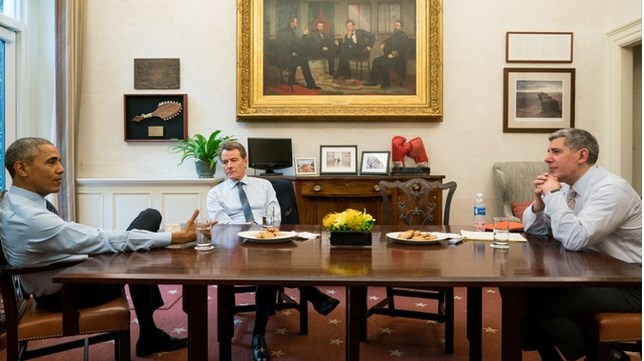 GALANES: I've probably watched too many YouTube videos of you lately, but as amazing as you've been in your pop culture moments - that tear for Aretha, singing "Let's Stay Together" - I think you're the first president in my life who is fully a man of his times. You've been the parents at Newtown, the boy who might have been Trayvon. You've been the Dreamers and their anxious parents. Has it been hard for you personally to represent such grief and hope?

OBAMA: One thing you have to keep in mind is that I'm probably the most recorded, filmed and photographed person in history up to now. Because I'm the first president who came along in the digital age. Every leader is a funnel for the culture he lives in. And despite the exotic name and weird background, I grew up as an ordinary middle-class kid. The cultural touch points that shaped you are the same ones that shaped me. And the fact that that was true until I was 45 probably differentiates me from most presidents.

And then Obama launches into how someone else in politics is an intransigent ideologue in the minority:

OBAMA: For somebody like L.B.J., who fastened onto a political career early, it probably changed the way he experienced culture and presented himself. It never felt like a burden to me. What's felt like a burden is seeing how politics has changed in ways that make it harder for Washington to work. There are a set of traditions, a constitutional design that allows someone like L.B.J. or F.D.R. to govern. And when those norms break down, the machinery grinds to a halt. That's when you feel burdened. When you say, "Here's what we need to do." I've made my argument; the majority of the population agrees with me. Yet we're confronted with endless filibusters and polarization that forbids us from getting stuff done.

Obama explained he "Had to do" a comedic interview to sell signing up for ObamaCare: "When I want to sign young people up for health care, I’ve got to do “Between Two Ferns,” which ended up being our biggest draw. Now, the flip side of this is the Trump phenomenon, where celebrity itself becomes a credential. If you are famous, then you have merit."

On the front of the Sunday section, they promoted Obama talking about how even he wouldn't vote for the Fox News caricature of Obama. (Please. Obama would vote for himself every time....his high impression of himself comes out all over this interview.)

OBAMA: Oh, it's very hard for me to engage that.

GALANES: You think it would be braggy?

OBAMA: No, it's that there's me, and then there's this character named "Barack Obama" who is slightly different on Fox News than he is on MSNBC. I wouldn't vote for the Barack Obama on Fox News probably.

OBAMA: What a loser! No, it's hard to see yourself in that way. The one area that I do feel confident about is the notion of an inclusive nation, that everybody is part of this story. That's a running theme I've been faithful to throughout my presidency.

In the "Times Insider" feature, they asked Galanes how he prepared for this joint interview, and Galanes oozed over the fictional Obama autobiography: "I started with Mr. Obama’s memoir, Dreams From My Father, which I recommend highly. It led me pretty directly to the emotional spine of our discussion: two fatherless boys — Bryan and Mr. Obama — searching for their identity in the world; the fathers they became; and the work they do."