Anyone who's heard Hillary Clinton sing would know that comparing her to one of the great rock singers is a ludicrous comparison. But it stands out as a notable air-kiss in the new book HRC by White House reporters Jonathan Allen (Bloomberg News) and Amie Parnes (The Hill).

When Hillary arrived at the State Department to begin work "as the new boss" in 2009, they wrote, "she brought with her an entourage befitting an international icon. And she was greeted as a celebrity." But she was Bono of U2?

Navigating through a buttoned-down sea of Brooks Brothers and Talbots as she made her way to the podium, Hillary was surrounded by applause, and by groupielike bureaucrats waving camera-phones. It was a historic moment, at least in the world of State…If her debut was a rock concert, Hillary was Bono – a bona fide international celebrity, with credibility as a crusader for the disadvantaged. In that regard, she was one of a kind.

Apparently, Hillary's scandals only made her more of a celebrity, as she was painted as a victim and never as a sleazy perpetrator:

Her celebrity status came not only because she had the last name Clinton.  It came, those who know her well say, because a woman got up and fought every time the world knocked her down, from her failed health care reform effort and her husband's very public infidelities to the brutal slog of the 2008 Democratic president.  Time and again her personal tragedies and subsequent triumphs played out in real time for a global audience. Even though she had been first lady and U.S. senator, she retained an underdog quality. She had served as her husband's most valued advisor for decades but suffered accusations that she had ridden his coattails, unaccomplished in her own right.

Reading the dust jacket on this book made me airsick on an airplane, even the flight was very smooth. They want Hillary to be president, and to make money by being the journalistic wind beneath her wings:

The mesmerizing story of Hillary Clinton's political rebirth, based on eyewitness accounts from deep inside her inner circle.

Hillary Clinton's surprising defeat in the 2008 Democratic primary brought her to the nadir of her political career, vanquished by a much younger opponent whose message of change and cutting-edge tech team ran circles around her stodgy campaign. And yet, six years later, she has reemerged as an even more powerful and influential figure, a formidable stateswoman and the presumed front-runner for the 2016 Democratic presidential nomination, marking one of the great political comebacks in history. 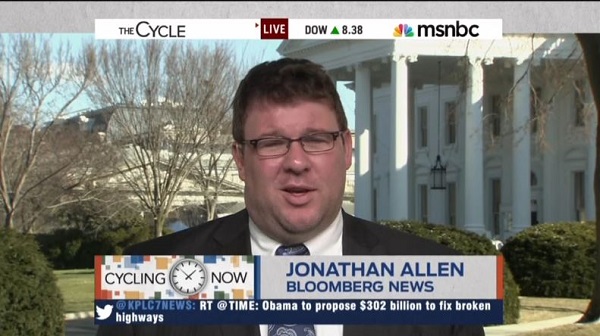 The story of Hillary's phoenixlike rise is at the heart of HRC, a riveting political biography that journeys into the heart of "Hillaryland" to discover a brilliant strategist at work. Masterfully unfolded by Politico's Jonathan Allen and The Hill's Amie Parnes from more than two hundred top-access interviews with Hillary's intimates, colleagues, supporters, and enemies, HRC portrays a seasoned operator who negotiates political and diplomatic worlds with equal savvy. Loathed by the Obama team in the wake of the primary, Hillary worked to become the president's greatest ally, their fates intertwined in the work of reestablishing America on the world stage. HRC puts readers in the room with Hillary during the most intense and pivotal moments of this era, as she mulls the president-elect's offer to join the administration, pulls the strings to build a coalition for his war against Libya, and scrambles to deal with the fallout from the terrible events in Benghazi—all while keeping one eye focused on 2016.

HRC offers a rare look inside the merciless Clinton political machine, as Bill Clinton handled the messy business of avenging Hillary's primary loss while she tried to remain above the partisan fray. Exploring her friendships and alliances with Robert Gates, David Petraeus, Leon Panetta, Joe Biden, and the president himself, Allen and Parnes show how Hillary fundamentally transformed the State Department through the force of her celebrity and her unparalleled knowledge of how power works in Washington. Filled with deep reporting and immersive storytelling, this remarkable portrait of the most important female politician in American history is an essential inside look at the woman who may be our next president.