Katie Couric’s upsetting the leftists again. The “girl-on-girl culture site” Autostraddle was unhappy that she had to ask the inevitable “genitals” questions when she had on two men on her talk show Monday who dress like women (“trans women”), model Carmen Carrera and actor Laverne Cox. As might be expected, Couric promotionally titled the segment "Transgender Trailblazers."

“The real trouble started when Couric started to ask Ms. Carrera if transitioning was painful because of all the surgery that she had to go through. Carmen looked a little confused and responded by talking a little about her nose job and breast augmentation and that’s when Katie pounced,” the author “Mey” complained. “She immediately asked if Carmen’s “private parts” are “different now” and if she’s had that surgery yet.” 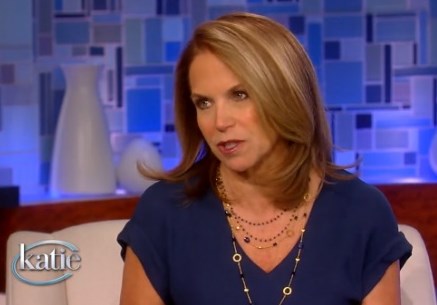 Carmen Carrera responded perfectly. First she literally shushed Katie Couric, trying to get her to stop asking such a private thing. Then she told her “I don’t want to talk about it, it’s really personal” and she told Katie that there’s a lot more to get than her genitals. She said, “after the transition there’s still life to live, I still have my career goals, I still have my family goals.”

In other words, no, I haven't changed the "bottom." Cox, of the Netflix prison "dark comedy" series “Orange Is the New Black,” said she doesn’t see herself as a “role model,” she prefers the term “possibility model.” It’s possible to pretend to be a woman and use a urinal. Couric kept turning the subject back to the bulge issue:

Unfortunately, that’s when Katie got back on the surgery track. Couric explained that she just wants to be educated and that a lot of people are curious because they’re “not familiar with transgenders.” She told Cox that Carrera had “recoiled” when asked about surgery and said that cis people are preoccupied with “the genitalia question.” Couric wondered if Cox felt the same way about that question and about cis people’s attitudes towards trans women.

As soon as Cox started telling her that, yes, she keeps her private parts private and that cis people do have an obsession with trans women’s genitalia, she really started picking up steam. Cox said that the preoccupation with genitalia and transition objectifies trans women and distracts us from the real issues.

COURIC; All of us want to be educated, and Carmen recoiled a little bit about when I asked about her transition and she said that people who are not educated or familiar with transgender, they’re preoccupied with the genitalia question, and I’m wondering if you think that’s true, and if you have the same feelings about that that Carmen does.

COX: I do, and [to Carrera] I was really proud of you for saying that. I do feel there is a preoccupation with that. The preoccupation with transition and surgery objectifies trans people. And then we don’t get to really deal with the real lived experiences. The reality of trans people’s lives is that so often we're targets of violence. We experience discrimination disproportionately to the rest of the community. Our unemployment rate is twice the national average; if you are a trans person of color, it's four times the national average. The homicide rate in the LGBT community is highest among trans women. If we focus on transition, we don’t actually get to talk about those things.

“Mey,” the author at Autostraddle, concluded Couric and others shouldn’t ask “transitioning” men “inappropriate questions about their bodies. I’m extremely tired of every story about trans women focusing on their transition, so when both Carrera and Cox spoke out against that line of questioning, I was cheering at my TV. Hopefully, as more and more resources are available, people won’t feel so comfortable asking strangers about what surgeries they’ve had and what their genitals look like. Trans people are more than just our bodies, and these two women showed that in the absolute best way possible.”

Earlier: Katie in trouble with liberals for questioning safety of HPV vaccine for teenage girls