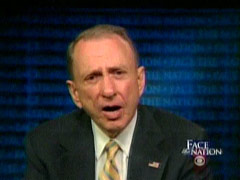 As the conservatives in the Tea Party movement gained strength, the liberal media often predicted they would cause harm to the Republican Party and drive out all the moderates. Wouldn't the conservatives look too extreme to win over voters? (See Rich Noyes for more.)

Now that the MoveOn.org leftists are poised to remove an incumbent Senator or two, they might spread the idea that there is also a strong ideological base in the Democratic party -- on the left. But the media rarely mourn that they're driving all out the moderate Democrats in their quest for ideological perfection, and they rarely even whisper that the leftist base will make the Democrats look too extreme to the electorate. Notice the tone of Chuck Todd's piece for Monday's Today, and let's throw in that the graphic on screen only said the trend was "anti-Washington anger." The words "liberal" or "on the left" are not spoken:

TODD: Arlen Specter struggling to win his first ever Democratic primary after nearly 30 years as a Republican.

TODD: Specter's opponent, Congressman Joe Sestak, lagged behind in the polls for months but vaulted ahead of Specter with this ad.

GEORGE W. BUSH [ad clip]: Arlen Specter is the right man for the United States Senate. I can count on this man. See that's important.

TODD: This time Specter is counting on the support of another president, Barack Obama.

BARACK OBAMA [ad clip]: I love ya and I love Arlen Specter.

TODD: Hoping this president save him like Bush did in 2004. In Arkansas, another endangered Democrat.

BILL HALTER: Senator Lincoln has been in one position on, on one day or one month and then 180 degrees opposite position on another day.

TODD: Lincoln says her moderation is no vice.

LINCOLN: And I think understand that working as a moderate, it can be a tough place to be, but it's essential. Because that's where most Americans are.

Todd also discussed Rand Paul leading Trey Grayson in the Republican primary in Kentucky. While he mentioned support from the Tea Party movement, he did not use the terms "conservative" or "on the right."

MoveOn.org openly describes Sen. Lincoln as "conservative" in their messaging:

Bill Halter's grassroots campaign to replace conservative Senator Blanche Lincoln is shaping up to be the biggest primary showdown of the year. If he wins, it'll send political shock waves through Washington—and all the other conservative Democrats in Congress will see that it could happen to them, too.

But Lincoln voted FOR ObamaCare when the president was on the line. How is that "conservative"? (MoveOn's answer: Lincoln and other "corporate Democrats" killed the "public option" that would make the government the largest insurance company.) Lincoln's lifetime American Conservative Union score is 19. That may make her a "moderate Democrat" compared to a John Kerry, but it doesn't make her a true centrist of the 50-50 kind. (Arlen Specter's ACU is 43, Susan Collins is a 49, Olympia Snowe is a 48, and Democrat Ben Nelson is a 47.)

MoveOn and Chuck Todd should notice that Bill Halter pushing on Lincoln from the left may not exactly be in the Arkansas mainstream, as the Washington Post reported last week:

But an Arkansas News Bureau/Stephens Media poll released Monday found that opposition to the health-care overhaul has strengthened in the state in recent months, with 64 percent expressing disapproval of Lincoln's vote, 28 percent supporting it and 8 percent undecided.