DISTORTION: The Press Has Been Pretending States Will Prosecute Miscarriages 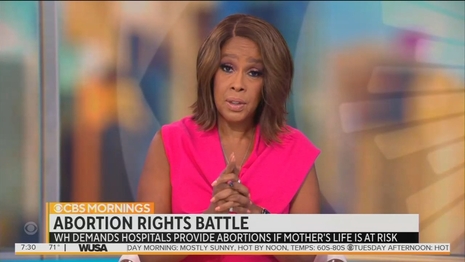 Ever since the Supreme Court overturned Roe v. Wade, certain liberal journalists have attempted to terrify American women, pretending that a tragic miscarriage or ectopic pregnancy (when a baby develops outside of the uterus) is the same as abortion. It isn’t.

Even the liberal New York Times admitted on June 28: “The 13 current state-level abortion bans make exemptions for medical emergencies” like ectopic pregnancy. But that hasn’t stopped the supposed fact-based press from pretending otherwise.

Here are the worst examples:

In an attempt to hype of what “Democratic strategists” were telling him, Jon Karl on the June 26 This Week warned, “Will there be prosecutions of women who cross state lines to get abortion, or even investigations of miscarriages?”

Hutchinson quickly retorted, “No. Absolutely not....When you’re talking about miscarriages, the exception is, of course, is the life of the mother, or there’s a medical/health emergency, and that’s between the physician —  they’re going to make those judgments in how to handle those things.” As for the overturning of Roe, he explained: “This is simply about abortion.”

Without journalistic push back, far-left Congresswoman Jackie Speier appeared on the July 11 GMA3 to falsely claim:

So, every woman who has a miscarriage today is going to be weighed as to whether or not that physician is going to, to take the action necessary because of fear of criminalization. Every time there’s an ectopic pregnancy, a similar question is going to be raised and the life of the mother is at risk in many of these situations.

On the July 12 CBS Mornings, Gayle King pretended that the Biden administration was coming to the rescue to this non-existent problem:

Now yesterday, the Department of Health and Human Services told hospitals they must provide such services for emergency conditions like ectopic pregnancies and complications of pregnancy losses even in states where abortion is banned with no exceptions.

Here are the reality: The Federalist explained in a June 29 fact check:

According to research by Daniel Gump informed by state statutes, even 35 states, most without trigger laws, explicitly state that miscarriages do not fall under the purview of “induced abortion” bans.

There is a clear legal distinction between an induced abortion, which deliberately intends to end the life of the baby, and the medically classified “spontaneous abortions” such as an ectopic pregnancy, miscarriage, early delivery with the intent of saving the baby and/or mother, and preventing implantation of a fertilized egg.

Even with that distinction, 48 of the 50 states have clear exceptions for induced abortion if a mother’s life is in serious jeopardy.