No Info on Disinfo: Nets Burying Radical Woman Behind Anti-Free Speech Board 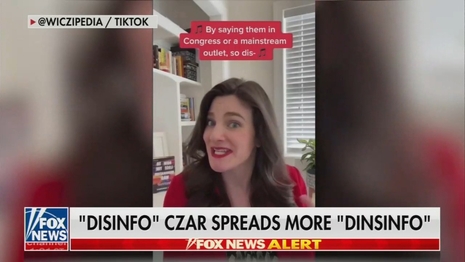 It’s now been 12 days since the Department of Homeland Security announced what amounts to an Orwellian attempt at muzzling free speech, a disinformation board that will ramp up in the midst of an important midterm election year.

But since April 27, the morning and evening newscasts have stayed silent on the DHS board. They have also been quiet on the background of Nina Jankowicz, the partisan, hard-left Democrat who is to run it.

With the exception of one minute and 23 seconds on the May 1 edition of the Sunday chat show Meet the Press, there’s been no network coverage of the board or Jankowicz. And since our last disinformation watch update on May 2, there certainly have been disturbing things that they could have covered regarding both.

The woman, whose job it is to discern truth from disinformation, gave a speech in Cleveland last October called “Disinformation and Democracy: Civic Discourse in the Digital Age.”

As noted by Townhall, she opined on Critical Race Theory:

Critical Race Theory has become one of those hot-button issues that the Republicans and other, you know, 'disinformers' who are engaged in disinformation for profit, frankly — there are plenty of, you know, media outlets that are making money off of this too — have seized on. I live in Virginia, in Loudoun County, that's one of the areas where people have really honed in on this topic.

CRT has been a big issue in Loudoun County. It’s also an issue that journalists buried in Northern Virginia. So she’s wrong that several “media outlets” are pushing it.

As journalist Josh Barro pointed out in a retweet, Jankowicz on March 4, 2020 was actually calling for platforms to refuse advertising for masks. This was early on during COVID. You’d think that journalists, who have been big proponents of wearing masks, would at least question this now. But they didn’t. 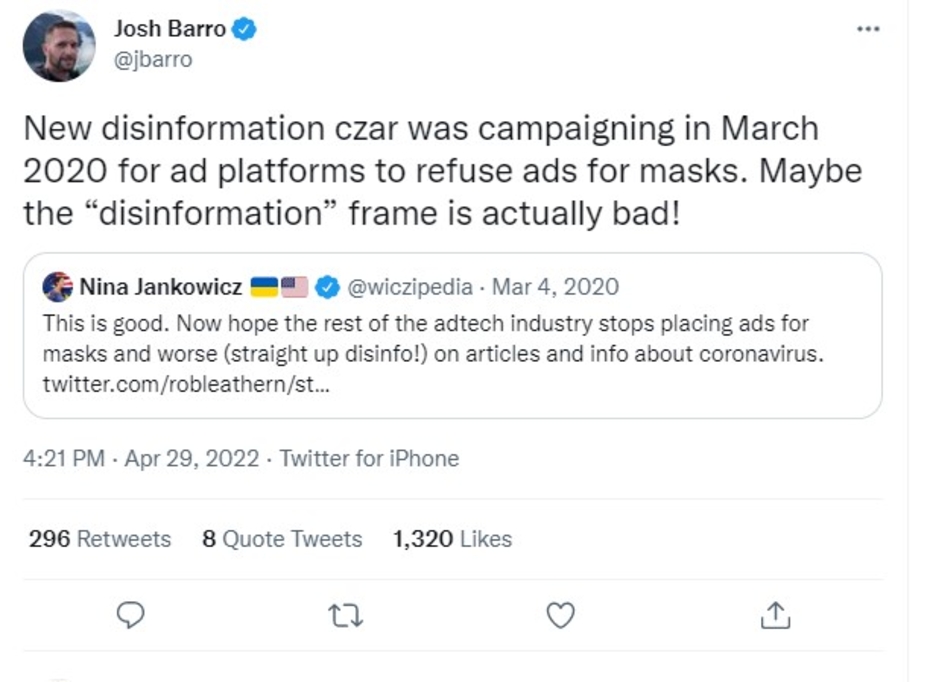 Republicans on the Homeland Security Committee are raising the alarms about Jankowicz. GOP members grilled Secretary Alejando Mayorkas about the board itself and its goals. Here’s FoxNews.com on May 5:

Writing to Department of Homeland Security Secretary Alejandro Mayorkas with "sincere concern" Thursday, the 13 Republican members of the committee demanded Mayorkas provide basic information to the committee including the disinformation board's organization, members, schedule and recommendations. They also scolded Mayorkas for a confusing rollout of the board, according to the letter first obtained by Fox News Digital.

"Your recent testimony and media statements regarding the board, as well as a recent briefing for Committee staff, have only created more questions and concern," says the letter, led by Ranking Member Rep. Jon Katko, R-N.Y.

As I noted last week, Jankowicz also peppered her Twitter feed with bizarre moments, such as in February 2021 when she parodied Mary Poppins, singing, “Information laundering is really quite ferocious. It’s when a huckster takes some lies and makes them sound precocious, by saying them in Congress or a mainstream outlet, so disinformation’s origins are slightly less atrocious.”

On Monday, May 9, The Washington Examiner reported that Jankowicz pushed the debunked Trump-Russia collusion claims:

The head of the Department of Homeland Security’s Disinformation Governance Board has an extensive history of promoting baseless Trump-Russia collusion claims from Hillary Clinton’s 2016 presidential campaign, including allegations now scrutinized by special counsel John Durham.

Nina Jankowicz has cited Christopher Steele as a disinformation expert, made misleading claims about the funding of his dossier, cast doubt on the Hunter Biden laptop story, downplayed Iranian election meddling, and critiqued the Wuhan, China, lab leak hypothesis.

Will the network morning and evening shows cover this? The evidence isn't encouraging.

You would think that journalists, who make their living off of free speech would be alarmed over a disinformation board run by a partisan with a very loose grasp on facts. But they don’t seem very bothered.