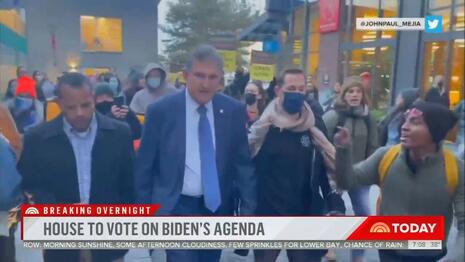 Joe Manchin on Sunday likely doomed Joe Biden’s massive $2 trillion spending plan and the media reaction was predictably hyperbolic. There were audible gasps on ABC when the news that he would vote no broke.

The New York Times on Monday’s front page accused him of “deserting” the President. Incendiary talk by liberal journalists has been amplified by real-world bullying of Manchin and his fellow moderate Senator Kyrsten Sinema of Arizona.

So the question must be asked: Do journalists care about the safety of Manchin and Sinema? For the last few months, the two centrists have endured an escalating series of incidents in which leftist protesters follow them, yell in bathrooms, and show up at their homes. What has the response from ABC, CBS and NBC been? They've mostly buried the abuse.

From October through November, MRC analysts looked at coverage (or lack of coverage) of bullying against Manchin and Sinema. Here’s what we found.

1. Global Warming Protesters Follow Manchin, Scream at Him and Swarm His Car

On November 4, climate extremists followed Manchin as he walked to his car in Washington D.C. and then mobbed his car, pressing up against it as they screamed at him. Yet, ABC and CBS censored the story completely, allowing no coverage on the November 4 evening newscasts and the November 5 morning shows.

NBC covered it only on the November 5 Today as Kristen Welker blandly noted, “Manchin confronted by climate activists yesterday over his opposition to the spending bill. That group surrounding and blocking the senator from driving out of a garage.” 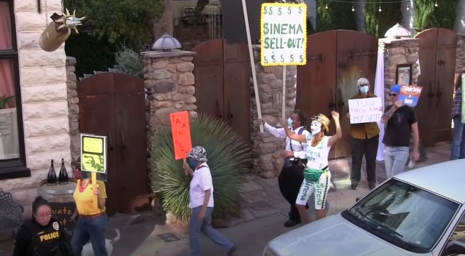 On October 23, Sinema officiated a wedding in Bisbee, Arizona. Screaming protesters ruined the day, berating the mother of the bride, all in an attempt to intimidate the moderate senator into supporting the infrastructure legislation. Yet, all three morning and evening shows skipped it. Here’s how the Associated Press covered it on October 26:

A video (warning: explicit language) posted to YouTube shows the bride’s mother tearfully pleading with protesters not to disrupt her daughter’s wedding, which was held at an outdoor venue separated by a wall from a public street in Bisbee, Arizona. Several demonstrators yell at the mother until one peacemaker suggests they walk quietly with their signs so the wedding can begin.

On October 3, angry extremists chased Sinema into a bathroom stall with a cell phone camera, yelling and demanding that she justify her refusal to support Biden’s spending plans. On October 4 and 5, the networks briefly covered this harassment while also mentioning protesters surrounding Manchin’s house boat on September 27.

ABC ignored the Democratic activists harassing Manchin and Sinema. CBS allowed 54 seconds and NBC offered the most, a still scant 134 seconds. All of this is despite the startling follow-up of the President of the United States telling reporters the harassment of two Democrats holding up his agenda is “part of the process.”

On the October 4 CBS Mornings, Ed O’Keefe blandly explained: “On Sunday in Arizona, activists followed Senator Kyrsten Sinema into a ladies room, angered by her opposition it a $3.5 trillion social policy bill.” O’Keefe quickly noted the water assault on Manchin’s houseboat home: “In Washington, other activists have even circled the houseboat of West Virginia Senator Joe Manchin.”

Now that the moderate Manchin is a "no" on spending an extra $2 trillion, you can assume that the harassment and bullying will only escalate. So, to the question, “Do journalists care about the safety of Manchin and Sinema?,” the answer, it appears, is no.