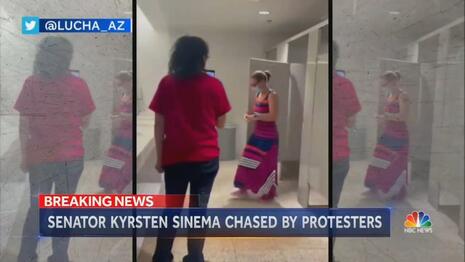 It’s pretty safe to say that network media outlets would howl with outrage if far-left favorites like Nancy Pelosi or Alexandria Ocasio-Cortez were harassed and intimidated in a bathroom.

But when the same thing happened to moderate Democratic Senator Kyrsten Sinema of Arizona, the shocking incident resulted in a collective shrug. The October 3 intimidation — and similar acts directed at fellow moderate Joe Manchin —  garnered just 188 seconds from the network morning and evening newscasts beginning on Sunday night.

ABC, so far, has ignored the Democratic activists harassing Manchin and Sinema. CBS allowed 54 seconds and NBC offered the most, a still scant 134 seconds. All of this is despite the startling follow-up of the President of the United States telling reporters the harassment of two Democrats holding up his agenda is “part of the process.”

After Fox’s Peter Doocy on Monday asked if such “tactics are crossing a line,” Joe Biden first agreed, “I don’t think they’re appropriate tactics.” He then dismissed the harassment: “But it happens to everybody.... The only people it doesn't happen to are people who have Secret Service standing around them. It’s part of the process.” 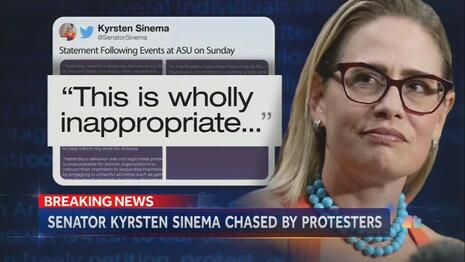 O’Keefe quickly noted the water assault on Manchin’s houseboat home: “In Washington, other activists have even circled the houseboat of West Virginia Senator Joe Manchin.”

On Monday’s Nightly News, Kelly O’Donnell offered at least a little bit of judgment as she recounted, “One of those moderate senators still not onboard [with Biden], Arizona's Kyrsten Sinema who was followed this weekend by progressive activists from a classroom where she teaches into a restroom where they continued to confront her and record her even as she went into a bathroom stall.”

O’Donnell, to her credit, however, quoted Sinema pointing out that the protesters violated Arizona State University policy by harassing her in the bathroom.

On Tuesday, only NBC’s Today bothered to follow-up, noting that more protesters confronted Sinema on a plane and again when she returned to Washington’s Reagan National Airport. O’Donnell noted, “While on the plane, an immigration activist approached Sinema to ask about passing protections for DACA recipients”

Here’s Twitter video of protesters following her after the plane landed: 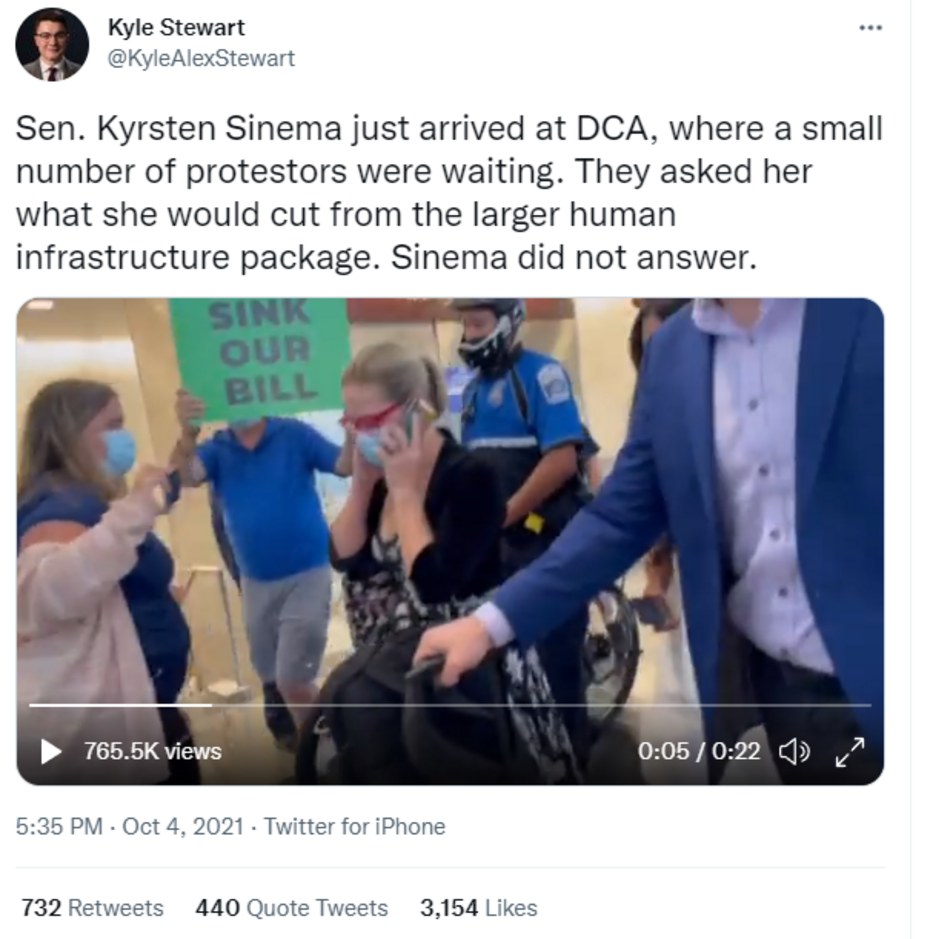 NBC’s coverage on Tuesday morning amounted to 1 minute and 38 seconds.

In 2010, ABC warned that anti-ObamaCare protests were “turning very ugly” with “slurs” being spewed at liberal politicians. In 2021, moderate Democrats are holding up Biden’s far-left agenda and journalists don’t seem to care about possible threats to the safety of Sinema and Manchin.

[Thanks to NewsBusters Deputy Managing Editor Nick Fondacaro for assistance.]

A transcript of the October 4 question to Biden is below.

PETER DOOCY: Mr. President, you're talking about how you have 48 Democratic votes right now. The other two have been pressured over the weekend by activists. Joe Manchin had people on kayaks show up to his boat. Senator Sinema last night was chased into a restroom. Do you think that those tactics are crossing a line?

JOE BIDEN:  I don't think they're appropriate tactics, but it happens to everybody from —  the only people it doesn't happen to are people who have Secret Service standing around them. It’s part of the process.