This Conservative Politician Was Butchered; One Journalist Mocked, Others Minimized 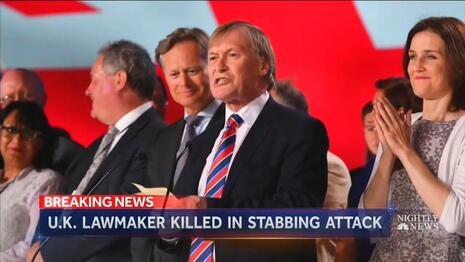 The tragic murder of a British Member of Parliament underlines the types of horrific crimes that journalists care about and the ones that they either joke about or minimize. David Amess, a Conservative MP was brutally stabbed to death on Friday by an apparent Islamic fundamentalist. And while the networks offered just under ten minutes of coverage from Friday night to Monday night, they focused over 15 minutes to the murder of liberal Labour MP Jo Cox in 2016 by an anti-immigrant extremist.

Longtime liberal columnist Elizabeth Drew offered the worst response to Amess's death on Twitter, mocking the murdered man for his name. She sneered: 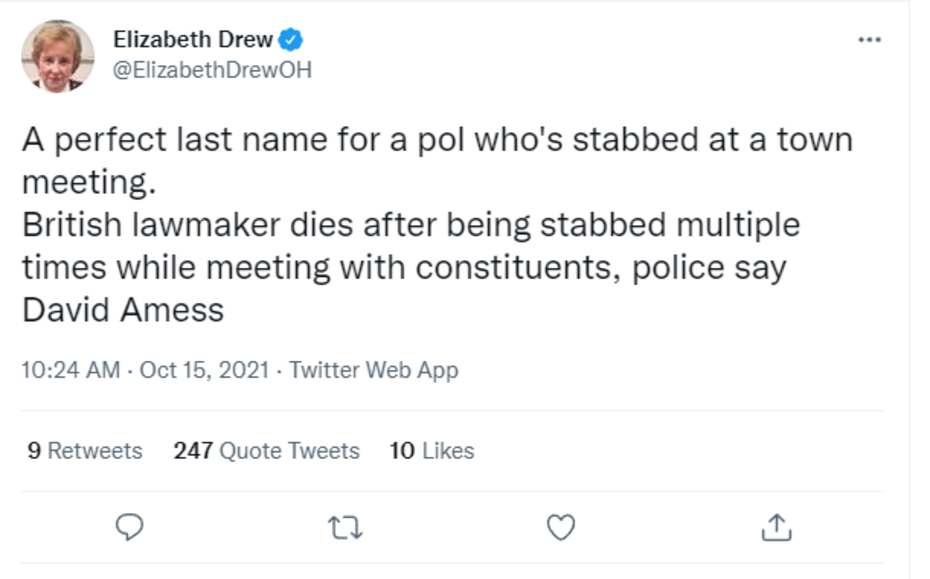 A few hours later, Drew deleted the tweet and she offered this brief, lame apology: “Apols for a lapse. Tweet deleted.”

MRC analysts looked at the coverage of the murders of liberal Labour Member of Parliament Cox in 2016 and the killing of the Conservative Amess in 2021 and contrasted the difference. Over similar three day periods. From June 16, 2016 to June 19, 2016, the ABC, CBS and NBC morning and evening newscasts devoted 15 minutes and 16 seconds to the shooting of Cox. From October 15 to October 18 2021, they allowed just 9 minutes and 52 seconds to the stabbing of Amess.

On Saturday night’s CBS Weekend News, Roxana Saberi labeled the deceased Amess as “hard-line,” saying, “The Conservative member of Parliament was stabbed multiple times at this church. Police say they arrested a 25- year-old suspect there and that Islamic extremism could be a motive. Amess was known for his hard-line views on Brexit...”

According to NPR, the British Metropolitan Police investigation “has revealed a potential motivation linked to Islamist extremism.”

In contrast, in 2016 when Cox was murdered by a fanatical Brexit supporter, the networks showed much more interest in covering the story. On June 16, 2016, then-CBS Evening News anchor Scott Pelley underlined, “Today in Britain, a member of Parliament was shot and stabbed to death. Forty-one-year-old Jo Cox was an outspoken campaigner for Britain to remain in the European Union.”

Reporter Jonathan Vigliotti made sure to highlight the killer’s motive, saying, he yelled “Britain first,’ the name of the anti-immigrant, right-wing party.”

Both these crimes are equally horrific, but journalists like Drew mocked the death of a conservative politician and network reporters are underplaying Amess's death at the apparent hands of an Islamic terrorist. All political assassinations aren’t created equal for ABC, CBS and NBC.