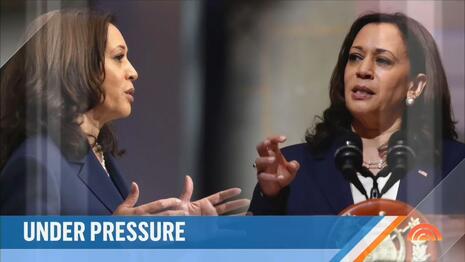 During the entire Trump administration we saw journalists leap on any anonymous leak or gossip about infighting inside the administration. Yet, when Politico on Wednesday unleashed a damning 2200 word expose on Kamala Harris and the alleged toxic, "abusive" environment inside the Vice President’s office, ABC, CBS and NBC on Wednesday night and Thursday morning censored the claim that working for the VP is a “place where people feel treated like s---.”

Despite a total of 90 minutes on the evening newscasts and six hours combined on ABC’s Good Morning America, CBS This Morning and NBC’s Today, the networks had no interest. It’s not as though there wasn’t time.

Here's some of the fluff coverage that DID make it: CBS devoted five minutes of air time to a popular podcast. GMA showcased the best protection against bug bites and NBC’s Today spent almost seven minutes previewing holiday travel options for the Fourth of July.

The Politico piece, written by Christopher Cadelago, Daniel Lippman and Eugene Daniels contained much of the same anonymous quotes that reporters loved during the Trump Era. This nameless individual complained about “feeling like shit.”

The Politico writers gossiped, “Harris’ team is experiencing low morale, porous lines of communication and diminished trust among aides and senior officials.” They touted the “22 current and former vice presidential aides” who talked for the story. Yet, unlike with Republican political leaders, this story has so far drawn no interest from fellow reporters.

“Dysfunctional” unhappy staffers for Harris are already trying to escape:

The dysfunction in the VP’s ranks threatens to complicate the White House’s carefully crafted image as a place staffed by a close-knit group of professionals working in concert to advance the president’s agenda. It’s pronounced enough that members of the president’s own team have taken notice and are concerned about the way Harris’ staffers are treated.

Just six months in, some of those aides in the Office of the Vice President said they are eyeing other employment opportunities. Others have left already. In recent days, two top advance staffers, Karly Satkowiak and Gabrielle DeFranceschi, parted ways with Harris in what they and Harris officials said were long-planned departures, a point disputed by two other people familiar with the matter.

The Politico writers detailed how awkward the Vice President’s tardy trip to the border looked: “It didn’t help matters that the border visit seemed hastily put together, symbolized by a news conference Harris held in which she struggled to speak over the engine of a roaring plane.”

Yet, viewers of ABC might not know this. Not only is the network boycotting the dysfunction at the VP’s office, but also the trip itself. From Wednesday to Friday night, ABC allowed a scant 28 seconds to Harris’s visit to the general vicinity of the border.

The corrupt politicians posing as journalists at ABC, CBS and NBC are doing their best to bury the dysfunction, incompetence and unhappiness swirling around the Vice President.