CBS’s Shocking Spin for Shoplifting Crime Wave: ‘Act of Desperation,’ ‘Not Getting Rich’

A shocking crime wave of shoplifting is sweeping the country, but CBS’s Tony Dokoupil on Wednesday excused it as an “act of desperation” because the people doing it are “not getting rich.” The wealthy This Morning host in the past has cheered socialism and ranted about the wealthy leaving “us” with crumbs.

Correspondent Vladimir Duthiers played video of a man on a bicycle inside a Walgreens in San Francisco. Security and customers looked on as he stuffed what appeared to be hair products into a giant trash bag. Dokoupil began his defense by insisting, “So crime is never justified, of course —.” He was interrupted, but you could feel the “but” coming on.

Dokoupil spun, “That reads as an act of desperation. You're not getting rich off what you take from a Walgreens. You're getting probably something you need. I don't know the details of that particular case.”

This was too much even for Dokoupil’s co-hosts. They skeptically responded:

VLADIMIR DUTHIERS: I mean, a bag full of — they looked like hair products?

ADRIANA DIAZ:  That’s what it says. Hair products. Which are valuable.

DUTHIERS: Which are valuable. He's filling his bag.

None of this is particularly shocking coming from Dokoupil. On January 31, 2019 he used real pies to convince unwitting mall customers that socialism was the way to go. Yelling at the patrons, “We got some free pie here! Free pie!” he then ranted about how the wealthy consolidate power while the middle class “got some crumbs.”

On June 9, 2021, he ranted about the “super rich” leaving “us” with “crumbs.” Dokoupil, it should be pointed out, is a millionaire.

The excusing of shoplifting on Wednesday was sponsored by Toyota and Progressive. Click on the links to let them know what you think.

VLAD DUTHIERS: Here are stories we think you'll be talking about today. This video shows a guy in San Francisco stuffing items into a garbage bag inside a Walgreens drug store even as two people, including a security guard recorded him on their cell phones. The suspect seems unfazed. You see him hopping on the bike, pedals between the two. One guy tries to grab the bag, manages to keep hold of the stolen loot while riding the bike outside the store. This happened on Monday. Just watch the brazenness. He puts the bag on what appears to be a Lyft bike.

DUTHIERS: Tries that -- nope. And out the door he goes. So at a recent meeting, Walgreens officials said thefts at its San Francisco locations have risen to four times the chain's national average over the past 12 months. They've also had to close 17 stores in the city over the past five years, largely due to the impact of thefts on their business. 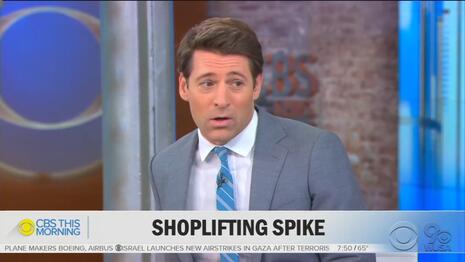 TONY DOKOUPIL: So crime is never justified, of course —

MASON: will say I think -- could have made a better effort to stop the bicycle. You could have disrupted the bike.

DUTHIERS: You never know, and I think that there has been a movement in some retail locations to not put people's lives in jeopardy —

DOKOUPIL: Yeah. Don't be a hero or toothbrushes --

DIAZ: Should the security guard be videotaping when a woman next to him is videotaping? You would think he would try to approach the guy.

DUTHIERS: Yeah. And also why did you let him in the store with a bicycle. That was my first thought.

DOKOUPIL: That reads as an act of desperation. You're not getting rich off what you take from a Walgreens. You're getting probably something you need. I don't know the details of that particular case.

DOKOUPIL: I mean, a bag full of hair products?

DIAZ:  That’s what it says. Hair products. Which are valuable.