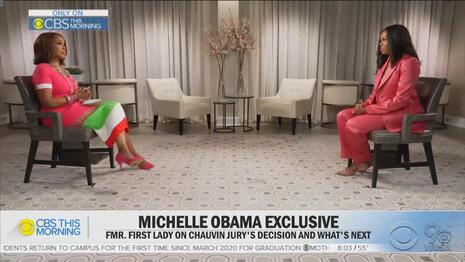 In the world of CBS, conflict of interest apparently doesn’t exist. Gayle King is a Democratic donor and Barack Obama donor. She has vacationed with the family. Yet, who lands the exclusive interview with Mrs. Obama? Gayle King of course. Sounding like a PR Democratic hack, King gushed on Friday, “Michelle Obama is still speaking out on the issues that she championed as First Lady. She is now the star and the executive producer of the Netflix show Waffles and Mochi.”

Regarding a statement that the Obamas put out in the wake of the George Floyd trial, King absurdly tried to pretend the very political couple wasn’t that: “She's talked candidly about her concerns and concerns that she has for her own family during these racially and politically divided times. It's rare for the two of them to issue a statement about anything."

She added, “They try very much not to get involved in a political way to speak certainly against any party. They're very, very careful about that.”

The Obamas aren’t political? This is just a flat-out lie. According to Ballotpedia, the former President has endorsed 591 candidates, all Democrats, since leaving office. Just prior to the 2020 election, Michelle Obama made a video for Joe Biden with the stark, highly partisan warning, “Vote for Joe Biden like your lives depend on it.” How exactly does King define the word political?

The CBS puff interview was four minutes with more air time promised on Monday. As I wrote in an August 2020 fact sheet for NewsBusters, King has donated “over $33,000 to the DNC, $7300 to Barack Obama, $1000 to Democrat Harold Ford Jr.” In 2017, she vacationed on a yacht with the Obamas.

For more on King’s troubling conflict of interest and connections to Democrats, go here.

The Obama propaganda on CBS was sponsored by Toyota and Ashley Homestore. Click on the links to let them know what you think.

GAYLE KING: We're going to begin with this: Michelle Obama is still speaking out on the issues that she championed as First Lady. She is now the star and the executive producer of the Netflix show Waffles and Mochi. The children's program is terrific. It focuses on teaching kids the value of healthy eating by sharing stories and traditions from around the world. But Monday, only on CBS This Morning, she's going to reveal Waffles and Mochi's next adventure. These two are very, very busy. We sat down in Washington where she told us why she's very excited about her upcoming initiative with Partnership for a Healthier America. We also spoke with Mrs. Obama about some of the other challenges facing America. We asked about her reaction to the jury's decision to find Derek Chauvin guilty for the death of George Floyd. After the verdict she and former President Obama released a statement saying “the jury in Minneapolis did the right thing.” She told us what compelled them to speak out after that critical decision.

MICHELLE OBAMA: The goal is to let leaders lead. But in certain times, people, you know, look to us often -- “what do you think, how do you feel?” And we know that while we're all breathing a sigh of relief over the verdict, there's still work to be done. And so we can't sort of say, great, that happened, let's move on. I know that people in the black community don't feel that way because they — many of us still live in fear as we go to the grocery store or worry about --

OBAMA: Walking our dogs or allowing our children to get a license. Just imagine —

OBAMA: They're driving. But every time they get in a car by themselves, I worry about what assumption is being made by somebody who doesn't know everything about them. The fact that they are good students and polite girls, but maybe they're playing their music a little loud. Maybe somebody sees the back of their head and makes an assumption. I, like so many parents of black
kids, have to —  the innocent act of getting a license puts fear in our hearts. So I think we have to talk about it more. And we have to ask our fellow citizens to listen a bit more and to believe us.

OBAMA: To know we don't want to be out there marching. I mean, all those black lives matter kids, they'd rather not have to worry about this. They're taking to the streets because they have to. They're trying to help people understand that we're real folks. And the fear that many have of so many of us is irrational and it's based on a history that is just —  it's sad and dark. And it's time for us to move beyond that.

KING: Yeah. On Monday, you can see more of our exclusive conversation with the former first lady about her ongoing mission to ensure that all families have access to healthy foods. It is a focus of her upcoming project with Waffles and Mochi called "Pass the Love" Like that title. We spoke about the impact the pandemic is having on our collective mental health. She's talked candidly about her concerns and concerns that she has for her own family during these racially and politically divided times. It's rare for the two of them to issue a statement about anything.

KING: They try very much not to get involved in a political way to speak certainly against any party. They're very, very careful about that. But I think they both felt considering the times that we're living in, that they had to say something about it.

MASON: I thought what she said was interesting when she said, you know, a lot of kids don't want to be out there marching. They've got other things they want to do.

KING: She's right about that.

MASON: They're marching because they're fearful.

TONY DOKOUPIL: Yeah. And you got to question your assumptions. If you're working in law enforcement, if you're that person behind somebody in a vehicle, you've got to ask yourself, “Is my first idea here my best idea about what's going on?”

KING: And the assumptions that are made. When she says when they don't know people. I was talking about my son walking his dog. And sometimes you think I better put on my Duke t-shirt. Just the fact that you even think that way, that you feel in danger at any time, it is —  it's very —  very jarring.