Crickets: CBS Silent on MASSIVE Disapproval for Biden at the Border 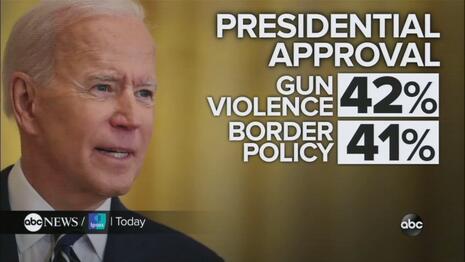 CBS This Morning was silent on Monday morning, offering no coverage of the massive disapproval of Joe Biden’s handling of the border debacle. ABC and NBC’s morning shows offered scant seconds to the specifics of the new survey showing 57 percent unhappy with the Democrat.

On ABC’s Good Morning America, Robin Roberts allowed 14 seconds to the poll: “We’re going to turn now to the crisis at the border with more than 18,000 children in federal custody. A new ABC News/Ipsos poll suggesting 72 percent of Americans approve of President Biden's handling of the pandemic, but 57 percent disapprove of his handling in the rise of migrants along the border with Mexico.”

Within the larger segment, Roberts and reporter Rachel Scott both used the word “crisis” to describe the mess at the border. So, credit to them for taking this growing problem seriously. But considering that this was an ABC News poll, you would expect more coverage. On Sunday night’s World News Tonight, there was an additional five seconds. Sunday’s This Week managed 36 seconds.

The poll contained more bad news for Biden on guns. Fifty seven percent disapprove of his handling of that issue. When bad news rolls in for Biden, expect liberal journalists to try and hide it.

The silence on the bad news for Biden on CBS was sponsored by Ford and Febreze. The scant coverage on ABC and NBC, respectively, was sponsored by Jersey Mike’s and Energizer batteries. Click on the links to let them know what you think.

A transcript of the full ABC segment is below. Click “expand” to read more. 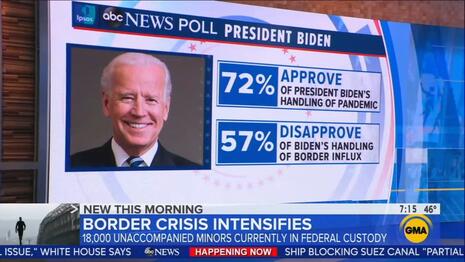 ROBIN ROBERTS: We’re going to turn now to the crisis at the border with more than 18,000 children in federal custody. A new ABC News/Ipsos poll suggesting 72 percent of Americans approve of President Biden's handling of the pandemic, but 57 percent disapprove of his handling in the rise of migrants along the border with Mexico. Rachel Scott just back from the border has more.

RACHEL SCOTT: This morning, the Biden administration is grappling with an intensifying humanitarian and political crisis at the border. As children continue to cross into the country by themselves at a record breaking pace, Texas state troopers told me they haven't seen anything like it. Have you ever seen this many unaccompanied minors crossing on or own?

TEXAS STATE TROOPER: No, I have not.

SCOTT: More than 18,000 unaccompanied minors are currently in custody. Teens like this one I met just moments after he crossed the border. He told me he left Guatemala alone searching for opportunity. Republican Senators turning this border patrol facility in Donna, Texas sharing photos and videos showing the severely overcrowded conditions inside. Kids packed inside these pods, sleeping shoulder to shoulder on the floor under foil blankets. Still no media allowed in. The White House downplaying the surge saying, it's nothing new.

SCOTT: And a border official tells ABC News that other the past month on average, they have stopped 5,000 people trying to cross the border per day, Robin. Officials are only expecting that number to grow.

ROBERTS: I bet. All right. Rachel, thank you.