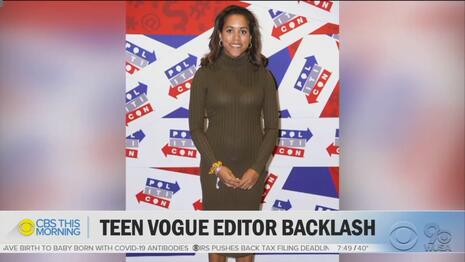 Cancel culture has claimed another victim. This time, it’s Alexi McCammond, the liberal editor of Teen Vogue, a woman who made racist tweets a decade ago when she was 17. That dumb action, which she has apologized for, got her fired from a job she'd had only days. The co-hosts at CBS This Morning were horrified.

Gayle King explained how she was “so disappointed” and Anthony Mason quite logically asked, “Were you like to be judged by everything you did at 17?” It’s too bad that CBS journalists only seem to understand this now that extreme wokeness is coming for liberals. Previously, the show cheered on cancel culture for things like eliminating the Washington Redskins name.

In 2011, McCammond tweeted about “stupid Asians” and “swollen Asian eyes.” King lamented, “I was so disappointed to read this -- I don't know her personally, but I've watched her on TV. She's very good at what she does. If you look back at anything we did at 17 and that we had to pay for years later, there's some being that that not right to me.”

Co-host Tony Dokoupil noted, “It does raise a question as to where the cutoff is for behavior.” Mason agreed, “Were you like to be judged by everything you did at 17?” Worried about the encroaching cancel culture, King added, “But how long do we pay a price for something we did when we were young and dumb? I don't know.” 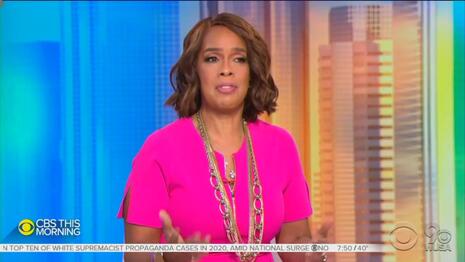 Now that cancel culture is coming for liberals, CBS This Morning journalists are concerned. Back in February, guest Michael Eric Dyson dismissed Democratic governor Ralph Northam dressing up in black face as a young man:

Ralph Northam is the governor of Virginia. When he was a medical student 20 some odd years ago he dressed in black face. Was it wrong? Of course. Was it ridiculous? Yes. Was it nefarious in instances? But my point was don't cancel him out.

King noted, “I thought it was interesting because we live in a cancel culture society big time today.” In the wake of Northam’s blackface scandal in 2019, King interviewed the Democrat and tried to save his career: “I marvel that you're still standing when so many people have said, 'You got to go, and you got to go now.' I'm thinking, either he's got a lot of confidence, or he's just a little crazy.”

Yet back in July of 2020, the morning show seemed to endorse cancel culture, hammering the “bloody” name of the then-Washington Redskins. The network featured Bill Rhoden of ESPN’s Undefeated to snarl: “The history of the name, there's nothing nice about it. It was never intended to be nice. It was a bloody nickname. It still is a bloody nickname. I think most people say we've got to move on.”

With wokeness coming for liberals now, CBS journalists are worried. Perhaps they should have realized the danger of cancel culture sooner.

The cancel culture double standard on CBS was sponsored by Kohl’s and Ford. Click on the links to let them know what you think.

VLAD DUTHIERS: Teen Vogue's editor is out of a job before she took over. 27-year-old Alexi McCammond faced backlash after anti-Asian and homophobic tweets she sent in her late teens. The magazine released a statement saying McCammond and the company have mutually decided to part ways. Members of Teen Vogue staff demanded the new editor resign after screen shots of the since-deleted tweets were shared online. The tweets, which date back 2011, include criticism of a stupid, quote, “stupid Asian T.A.” in her classroom. And in another, she wrote, quote, “Now googling how not to wake up with swollen Asian eyes.” She also tweeted, quote, You're so gay” to a user on another occasion. McCammond, who was supposed to start a new job next week has apologized. She said her past tweets, quote, “overshadowed the work I've done to highlight the people and issues that I care about” and added she became a journalist to support, quote, “our most vulnerable communities. As a young woman of color, that is part of the reason why I was so excited to lead the Teen Vogue team to its next chapter.”

ANTHONY MASON: She was 17 years old when she sent these tweets. She's apologized for them, and Teen Vogue knew about them before they hired her.

GAYLE KING: I was so disappointed to read this -- I don't know her personally, but I've watched her on TV. She's very good at what she does. If you look back at anything we did at 17 and that we had to pay for years later, there's some being that that not right to me.

TONY DOKOUPIL: It does raise a question as to where the cutoff is for behavior. And if you --

DOKOUPIL: She said “it does not reflect my views or who I am today.” What growth are people allowed?

DUTHIERS: Although the tweets were racist when she did them.

KING: We all agree!

MASON: No argument there.

DOKOUPIL: Far be it from me to judge the particulars of the case, but I do think it points to a bigger conversation about where the lines are.

MASON: Were you like to be judged by everything you did at 17?

KING: She didn’t have the newsroom support behind her? Is that what it is?

DUTHIERS: 20 staff members of Teen Vogue sent a public letter when she was announced as the editor-in-chief saying that they really wanted to have a conversation --

KING: It’s hard to get past that. But how long do we pay a price for something we did when we were young and dumb? I don't know.

DUTHIERS: I 100% agree with that sentiment.