CBS’s Save Northam Effort: We Must Understand the ‘Context’; ‘He Wants to Make This Right’

Since it’s clear that disgraced Virginia Governor Ralph Northam isn’t resigning in the wake of his KKK/blackface scandal, CBS has begun the rehabilitation effort. On Sunday and Monday, the network devoted a combined 23 minutes and 9 seconds to Gayle King’s interview of the Democrat. King, Norah O’Donnell and her other CBS This Morning co-hosts stressed Americans must understand the “context,” “the broader lens” and that Northam “wants to make this right.”

Despite the running time of the interview (on Monday's This Morning and Sunday’s Face the Nation), King never once mentioned Northam’s other controversy: His seeming support for infanticide. Instead, King, a Democratic donor, touted the Governor’s refusal to quit: “I marvel that you're still standing when so many people have said, 'You got to go, and you got to go now.' I'm thinking, either he's got a lot of confidence, or he's just a little crazy.”

She also complimented his overall political record: “Your history of work is good.” While talking to her This Morning colleagues, she vouched for Northam’s character: “It's a very interesting time for the governor because what I walked away feeling is that he so wants to make this right.”

Co-host Norah O’Donnell complimented King’s interview: “I think what you did was try to broaden the lens.” O’Donnell then insisted the need for understanding the larger context of the KKK/blackface photo:

Give us more context when we judge people quickly and give a larger scope of this. His career includes working as a pediatric neurologist. Visiting the homes of hundreds of African-American families in crisis. He went to an integrated school. His parents could have sent him to a private all-white school as the New York Times points out today. We have to view this in context and what we can learn from it.

Can we imagine any of this being said if Northam was a conservative Republican and not a liberal Democrat? 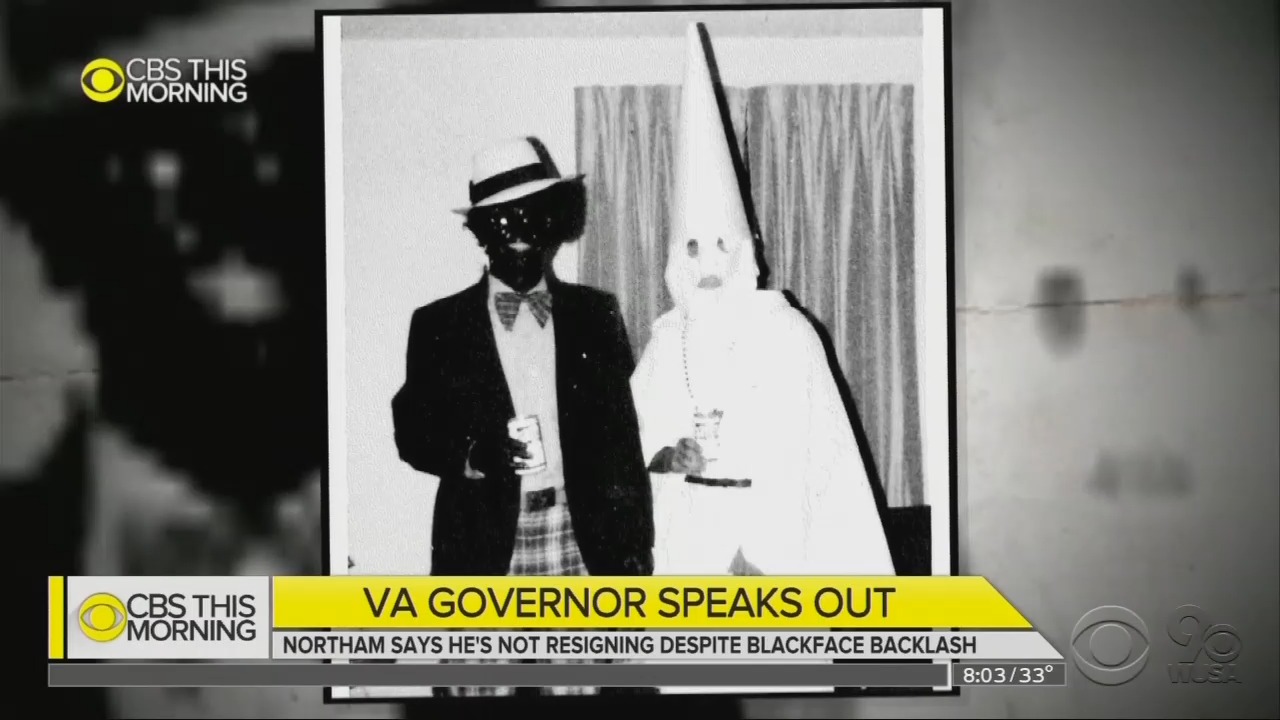 In a January radio interview, prior to the yearbook scandal, the Governor said this about abortion:

Despite 23 minutes of air time, King never mentioned the controversy.

In fairness to King, she DID press Northam on some of the unbelievable parts of his story, such as suggesting he had never seen the yearbook photo before this scandal:

GAYLE KING: Let's go back to the picture. I know you've addressed it. It still raises so many questions for people.

KING: Why do you think it came out now?

NORTHAM: I don't know. This is really the first time I have ever seen that picture.

KING: How that could be?!? It's on your yearbook page, Governor!

A partial transcript of the interview is below Click “expand” to read more. 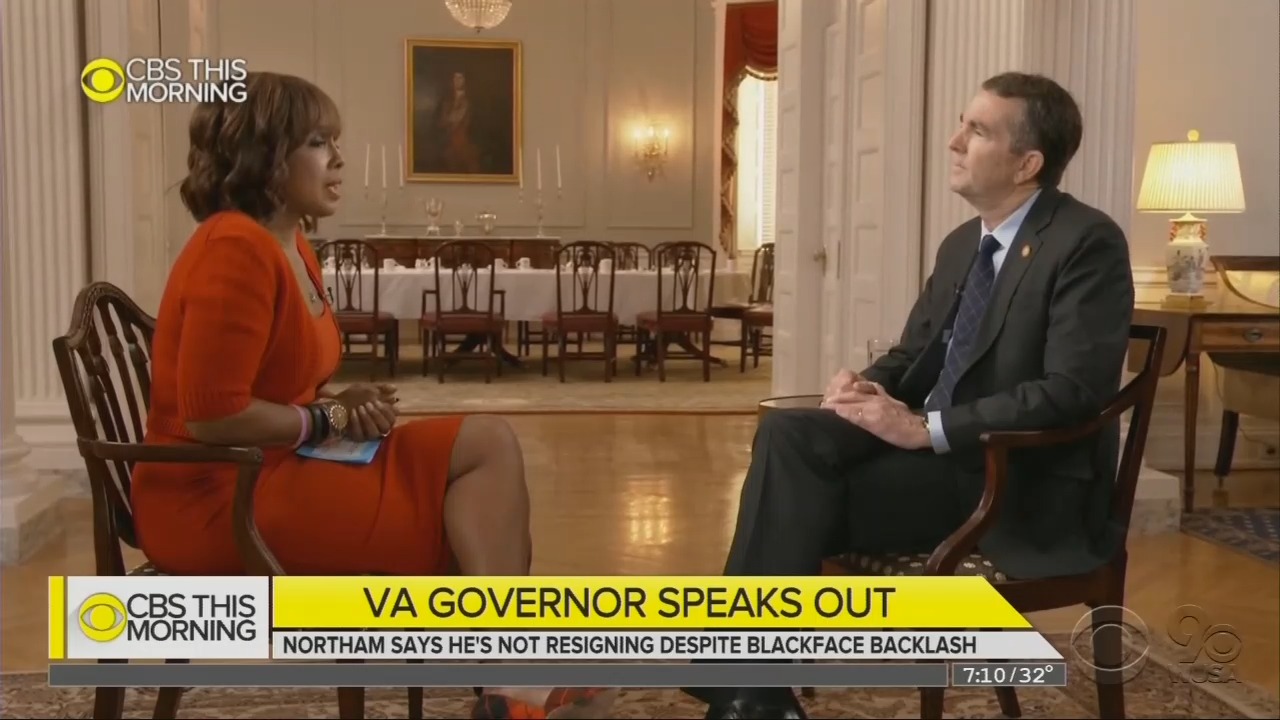 GAYLE KING: Virginia Governor Ralph Northam says he is not going anywhere. He plans to stay in office in spite of a racist photo printed in his medical school yearbook. In an interview you’ll see only on CBS News, we spoke with the Democratic Governor yesterday who still faces calls to resign. He now says he admits to us he struggled in his initial response to that photograph in his yearbook page. Northam now says this is a teaching moment for himself and the country. A Washington Post poll over the weekend shows Virginians are split on whether he should stay in office. More than half of black Virginians do not think that he needs to step down. Here's part of our conversation with the governor. What have you learned that you didn't know before?

RALPH NORTHAM: Well, several things starting with I was born in white privilege. And that has implications to it. It is much different the way a white person, such as myself, is treated in this country —

KING: Did you not know that you were born into white privilege?

KING: Governor, it's hard for people listening to you, an educated man, at the age of 59, to say that you're just learning about the history of it. You didn't know the history, know that it was offensive before?

NORTHAM: I think we're all on a learning curve. Certainly, Ms. King, I am not the same person at age 59 as I was in my early 20s.

KING: So you would think in 1984 that this was certainly a problem back then.

KING: Did you have black friends growing up?

KING: See, that's what makes it even harder for us to understand. You had black friends or grew up with black people. So it —  it would seem that you would be more sensitive and more aware of that.

KING: Let's go back to the picture. I know you've addressed it. It still raises so many questions for people.

KING: Why do you think it came out now?

NORTHAM: I don't know. This is really the first time I have ever seen that picture.

KING: How that could be?!? It's on your yearbook page, Governor!

NORTHAM: I was shocked to see it. I really believe the fact that if you look at the unpreparedness of me to react to this on Friday night and Saturday, that confirms that this is the first time.

KING: Let me ask you this: Are those your pants? Those pants are very distinct. Do you have a pair of pants that look like that?

KING: You first said that —  first you said you wouldn't say which one was you. That was the first thing. Then you came and apologized for being in the picture. Why would you apologize for something that horrific if you're not 100 percent sure that it's you?

NORTHAM: I definitely overreacted. And again —

KING: But why did you do that?

KING: Governor, that's a hell of an overreaction for something that is so sensitive and so offensive and so explosive, to take responsibility without really knowing for 100 percent that that's me.

KING: But instead of clarifying at a press conference nine dates ago, he raised more questions. Admitting to using shoe polish to darken his face, impersonating Michael Jackson for a dance competition.

KING: For many of us watching, it looked like you were about to actually demonstrate the Moonwalk. Were you thinking about showing off your Moonwalking skills?

NORTHAM: because I don't have those at age 59. But I will tell you, Gayle, I regret that. This is a serious moment.

NORTHAM: Whether it was a nervous laugh or whatever —  it was inappropriate.

KING: Many people credit Pam, your lovely wife, for stepping in at that point. Another reason to be nicer on Valentine's day for you, sir.

KING: What do you say to people that are looking at this story, if you do stay in office which you say you are, someone that commits a racist offense and says, well, the governor did it, and he —  and he's okay.

KING: Do you think it sends a message that this isn't being taken seriously if you stay in office when so many people at the highest levels want you to step down?

KING: It's a very interesting time for the governor because what I walked away feeling is that he so wants to make this right. I talked to many black people and white people in Virginia who say —  he has a lot of support in the state of Virginia —  who say look at his history, what he's done. No one —  the people that I talked to do not believe he's racist. They think it was a stupid thing but they don't think he's racist.

NORAH O’DONNELL: Gayle, it was such a good interview. I think what you did was try to broaden the lens.

O’DONNELL: Give us more context when we judge people quickly and give a larger scope of this. His career includes working as a pediatric neurologist. Visiting the homes of hundreds of African-American families in crisis. He went to an integrated school. His parents could have sent him to a private all-white school as the New York Times points out today. We have to view this in context and what we can learn from it.

KING: No question he’s had some missteps. I saw an interesting article that says is there anyone out there when says they haven't done anything stupid in their 20s or in their 30s. Think about that.

JOHN DICKERSON: Well then, the fascinating question will be to take the past and what he’s dealing with now and brings it to the present. When he talks about unconscious attitudes of today, what is he identifying? And what light does he shine on those? And new understanding —  that's in the moment now. Not something that happened in the past. That's what lays before him. He was quite vague, but what he brings forward and what everybody sees from this about what goes on today and what's unconscious today.

BIANNA GOLODRYGA: What resonated with him saying multiple times no excuses. We didn't hear that last Friday.

KING: He’s not trying to explain it. And he has some explaining to do. I asked about the shoe polish comment. There’s still more to come when talking about the Governor.

KING: I marvel that you're still standing when so many people have said, “You got to go, and you got to go now.” I'm thinking, either he's got a lot of confidence, or he's just a little crazy.

KING: you might have to convince people that you're still the right leader for the job. You have a lot to do.

KING: Take us in the process of you realize, “Uh-oh, Houston, we have a problem, that's not me.” Take us behind the scenes and discussions that you and your staff and wife had about, “Now we're going to go in front of the cameras and say it is —  it isn't me.”

KING: But was there some concern with people saying, “Governor, now you're going to really look crazy.”

KING: So after Saturday, the drum beats started beating immediately about “He needs to go. He needs to go.”  By people in your own party, by some of the top Democratic leaders in the country. By some of your constituents who were protesting outside your home. And after that happened, you thought what?

KING: And why you think you still deserve this job when so many are calling for you to step down.

KING: You know, the other thing that struck people in the news conference is when you were talking about Michael Jackson and you said, you know, because many people know it's hard to remove shoe polish your face. And I’m thinking, A, how do you know that? Because it certainly implies that you put shoe polish on your face on more than one occasion. How do you know it’s difficult to remove? I didn’t know that.

KING: From the beginning you said you were not stepping down. But the story has certainly changed. Are there any circumstances that you would step down?

KING: Wouldn't you have preferred to have this unique opportunity another way?