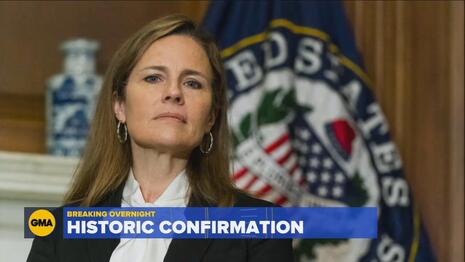 ABC on Tuesday REALLY wanted to let you know that there is now a "conservative" majority on the Supreme Court. Good Morning America alerted viewers five times in stories on Amy Coney Barrett’s confirmation. NBC only used the conservative label three times. CBS This Morning made sure to highlight, once again, that Ruth Bader Ginsburg disapproved of a new nominee before the election.

She later reiterated, “No president since Richard Nixon has had this many Supreme Court appointments in a single term and George, this is a conservative majority on the court now locks in this legacy for President Trump.”

Using the same language in the 8 AM hour, Stephanopoulos alerted, “She locks in a solid conservative majority on the court.” 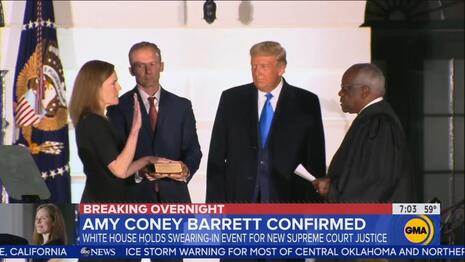 On the Today show, co-host Hoda Kotb lamented, “The court's conservative majority cemented for decades. Just ahead, how her impact could be felt immediately on issues from health care to women's rights, even to this year's election.” Reporter Peter Alexander labeled her “the third conservative justice put on the bench by President Trump.”

He also used the “cement” imagery: “President Trump one week until the election looking to capitalize on the victory that cements the court's 6-3 conservative majority.”

On CBS This Morning, reporter Weijia Jiang complained, “Less than two hours earlier the Republican-controlled Senate controlled 48-year-old Barrett in one of the most partisan Supreme court processes ever. No Democrats voted in her favor.” Co-host Gayle King complained, “After a very intense partisan fight, she is the first justice confirmed without bipartisan support since 1869.”

Jiang brought up, yet again, the last wish of Ginsburg: “Barrett's predecessor, the late Justice Ruth Bader Ginsberg said it was her fervent wish that a new justice not be appointed until after the election.”

CBS was sponsored by Tylenol. ABC by Colgate. NBC by Hyundai. Click on the links to let them know what you think.

A partial transcript of ABC is below. Click on "expand" to read more.

GEORGE STEPHANOPOULOS:  Locking in a 6-3 conservative majority on the high court. Barrett set to immediately hear cases. What this could mean for the future of health care, abortion and immigration with the final votes for the presidential election just seven days away.

STEPHANOPOULOS: Last night at the White House, the swearing in of new Supreme Court justice Amy Coney Barrett before a large socially distanced crude in masks that did echo to some degree her nomination one month ago which turned out to be a superspreader event. Not masks in evidence that time. Barrett locks in a solid conservative majority on the court.

CECILIA VEGA:  Just a week before election day and struggling in the polls, President Trump relishing in the made for TV photo-op. Senate Republicans delivering the victory at lightning speed. Maine's Susan Collins the only Republican to join Democrats in opposition. The move locking in a 6-3 conservative majority on the nation's highest court for years to come. Barrett now becomes the fifth woman on the bench and starting later today she will be in position to immediately hear cases including the future of health care and even the presidential election. Overnight Barrett promising to remain impartial.

VEGA: Now, again, Barrett could be hearing some huge cases coming up. Let me just give you a few of them. The election, Affordable Care Act, abortion, LGBTQ rights, immigration, the release of the president's financial record, all of those could come before the court soon. President Trump, no president since Richard Nixon has had this many supreme court appointments in a single term and George, this is a conservative majority on the court now locks in this legacy for President Trump. This is a huge part of his record now.

STEPHANOPOULOS: We have a lot of news to get to, starting with the swearing in of Amy Coney Barrett at the White House last night. Huge crowd gathered on the south lawn of the White House. You see they were socially distanced and did wear masks last night. She locks in a solid conservative majority on the court.