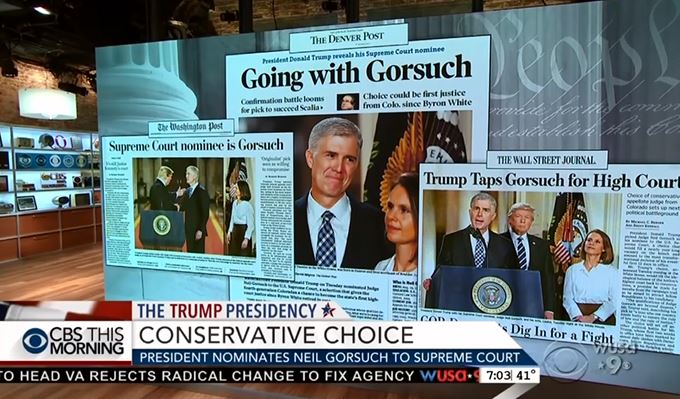 Besides tit-for-tat vindictiveness aimed at punishing Republicans for their treatment of Obama Supreme Court nominee Judge Merrick Garland, the Democratic line of attack on Judge Neil Gorsuch is that he is allegedly outside the “mainstream” of judicial thinking.

This is a time-tested tactic that harkens back to 1987, when Senate Democrats smarmily painted the highly-qualified Judge Robert Bork as a far-right extremist. It was the first time when a nominee’s ideology was used as the basis for the Senate’s rejection of a Supreme Court nominee.

The Democrats’ approach has been aided over the years by the establishment media’s fetish for habitually casting Republican nominees in ideological terms, while employing virtually no such tags for Democratic appointees. Instead, media coverage of Democratic nominees is often focused on their inspiring life stories, and suggestions that their empathy with everyday citizens should be a criterion for a top judicial slot.

An MRC analysis of labels used on ABC, CBS and NBC morning and evening news shows during the 24 hours after each of the past six Supreme Court nominations demonstrates the pattern. GOP nominees John Roberts, Samuel Alito and Neil Gorsuch were labeled by reporters as “conservative” a total of 36 times, while Democratic nominees Sonya Sotomayor, Elena Kagan and Merrick Garland were called “liberal” a mere seven times — all on CBS.

Here’s a summary of how the broadcast networks treated each potential Justice’s ideology as they were introduced to the country: 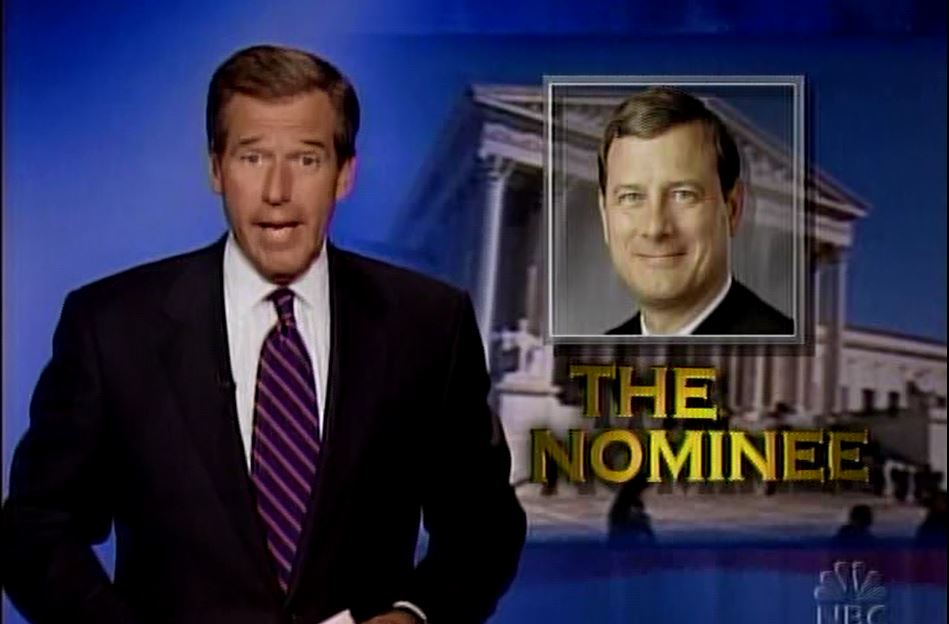 ■ JOHN ROBERTS, JULY 20, 2005: Roberts was introduced by President George W. Bush during a prime time televised event on July 19, 2005, after the conclusion of the broadcast evening newscasts. Coverage the next morning and evening included eleven instances when reporters tagged him as “conservative.”

While not included in the tally of reporter-assigned labels, the networks’ expert guests were even more emphatic about Roberts’ ideological reputation. “This guy is very, very conservative,” law professor Jonathan Turley insisted on NBC’s Today. Over on Good Morning America, NPR legal correspondent Nina Totenberg agreed: “People who know him and have had arguments with him...[will] tell you this is a very, very conservative man.” 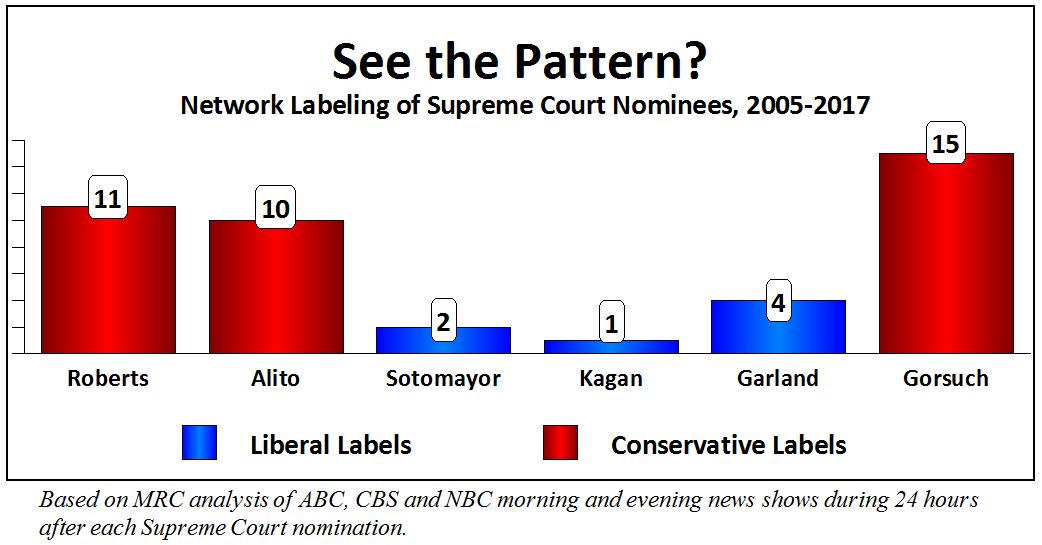 Like Roberts, the networks immediately cast Alito in ideological terms, using ten “conservative” labels over the next 24 hours. On ABC’s World News Tonight, anchor Elizabeth Vargas said the nominee was “a staunch conservative,” while correspondent Terry Moran found Alito to be “deeply conservative.” 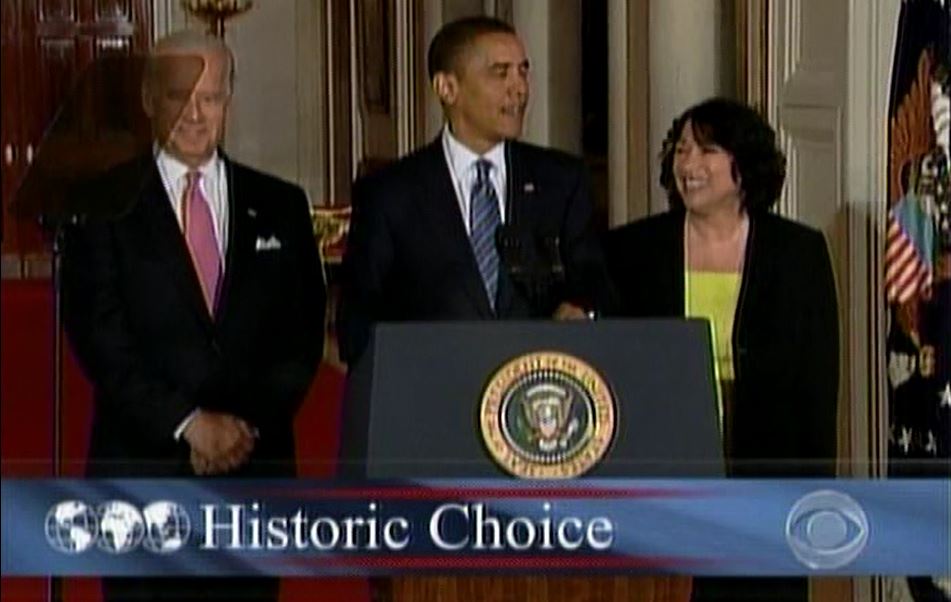 ■ SONYA SOTOMAYOR, MAY 26-27, 2009: The retirement of Justice David Souter gave President Barack Obama his first chance for a Supreme Court nomination, and gave the networks a chance to prove their even-handedness. Instead, the networks focused on identity politics, with the CBS Evening News touting Judge Sonya Sotomayor's “historic” choice as the first Hispanic named to the Court, and showed little interest in labeling her as a “liberal.”

In fact, ABC and NBC never using the word themselves, but passed it along only as something “conservatives” claimed about the prospective Justice. “Despite her remarkable personal odyssey, Judge Sotomayor is already being called a liberal activist by some conservative groups,” Pete Williams announced on the NBC Nightly News. He was echoed the next morning by Matt Lauer on Today: “Conservatives are already labeling her a liberal activist.”

Only CBS reporters employed the “liberal” label themselves, and then just twice. On the Evening News, correspondent Wyatt Andrews said Sotomayor’s judicial decisions were “generally seen as liberal,” while moments later analyst Jeff Greenfield said it was unclear “whether Sotomayor’s kind of liberalism on the bench is the same as David Souter’s, or she’ll have different views.”

■ ELENA KAGAN, MAY 10-11, 2010: When Justice John Paul Stevens decided to retire, President Obama tapped his Solicitor General, Elena Kagan, to replace him. As with their coverage of Sotomayor’s selection, neither ABC nor NBC would call Kagan “liberal” except as a claim made by conservatives.

On the Evening News, CBS’s Jan Crawford uniquely declared “her career has put her solidly on the left,” but contended “she will have significant conservative support among academics and lawyers....That support alarms some liberals who worry she is weak on issues of executive power and the war on terror.”

And the next morning on CBS’s Early Show, co-host Maggie Rodriguez cited Kagan’s time at the Clinton Justice Department to ask GOP Senator Jeff Sessions if he thought Kagan might “shift the court to the Right, compared with Justice Stevens” on the issue of abortion. Sessions doubted she would. 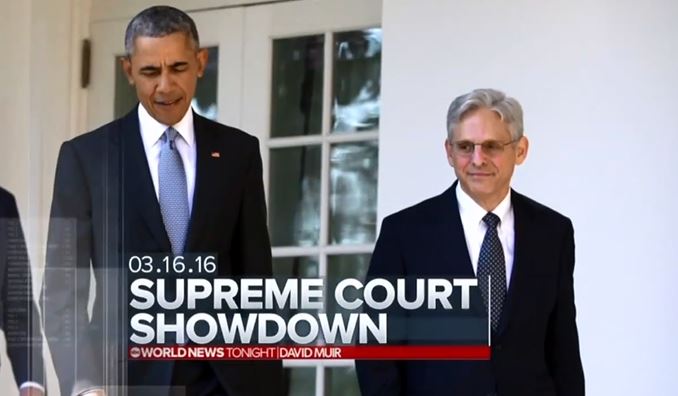 ■ MERRICK GARLAND, MAR. 16-17, 2016: Following the death of Justice Antonin Scalia, President Obama nominated Judge Merrick Garland to fill his seat, despite Senate Republicans saying they would not hold hearings so close to a presidential election. In the 24 hours after he was selected, Garland was labeled by reporters more often than either Sotomayor or Kagan, but two-thirds of those (9 out of 13) claimed he was a “moderate,” not a liberal.

Once again, neither ABC nor NBC would call Garland liberal. On ABC’s World News Tonight, Supreme Court correspondent Terry Moran told viewers “Garland is known as a moderate on the appeals court.” On the NBC Nightly News, correspondent Pete Williams said Judge Garland has “been a moderate” on the bench, while on the Today show, Andrea Mitchell declared the judge “hardly a liberal.”

The next day on CBS This Morning, Crawford offered this explanation of Garland’s aproach: “He’s certainly liberal, but by no means is he some kind of liberal flame-thrower.” 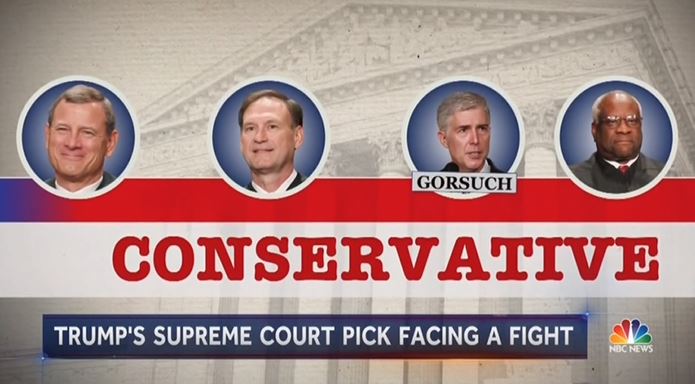 ■ NEIL GORSUCH, FEB. 1, 2017: Like Roberts a dozen years earlier, Judge Neil Gorsuch was announced in a prime time event after the broadcast evening newscasts had aired. The next day, the networks reverted to pattern, using 15 “conservative” labels to highlight the ideology of this Republican selection.

On CBS This Morning, co-host Charlie Rose labeled Gorsuch right off the bat: “Gorsuch has built a consistent conservative record in his ten years as a judge.” Correspondent Jan Crawford soon reiterated: “With a solid conservative resume, Gorsuch sided with religious employers objecting to ObamaCare’s contraceptive mandate.” Later in the show, co-host Gayle King felt the need to repeat again: “Gorsuch is a conservative, like Scalia.”

On NBC’s Today, correspondent Peter Alexander said Trump was “delivering on a campaign promise to nominate conservatives to the Supreme Court,” while that night reporter Pete Williams passed along how “a study by three Supreme Court scholars concludes he’d be further to the right on the Court than Justice Scalia.”

There’s absolutely nothing wrong with calling conservative nominees “conservative.” This review, however, demonstrates that the media’s interest in ideology fails to extend to liberal Supreme Court nominees.

If, as has been the case since 1987, a candidate’s ideology is going to be a major factor in a confirmation battle, then simple fairness suggests reporters equally label both sides. Fixating only on a Republican appointees ideology, while ignoring Democrats’ philosophy or describing them as “moderate,” plays into the hands of those who would tilt the Court to the Left.