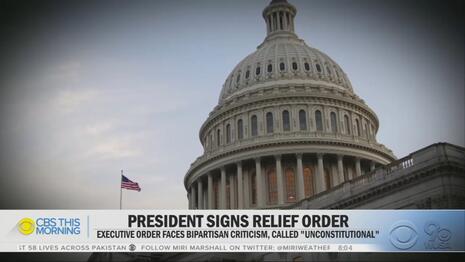 CBS This Morning on Monday jumped on Donald Trump’s executive action to provide economic relief in the wake of the pandemic, dismissing it as “annoying” and “just like static electricity.” Not even attempting to hide disdain, Major Garrett also chided the “complicated” and “unworkable aspects.” This is not what he had to say about Barack Obama’s DACA action back in 2014.

Asked by Anthony Mason about the President bypassing Congress, Garrett waved it away: “Look, the President loves headlines, declarations, and the appearance of action.” He added, “The problem for the White House is most of these interventions are complicated. Some are unworkable. Many could be challenged in court.”

The journalist then offered his condescending comparison: “This isn't much voltage. It's kind of like static electricity... For a moment you remember it, but it's mostly annoying and doesn't really solve the problem.”

This is quite a different tone than Garrett offered in 2014. A Media Research Center study recounted how he parroted Barack Obama’s talking points after the Democrat’s executive action on DACA.

A little different than “annoying” and like static electricity, right? But that’s the hypocrisy of CBS News and the liberal media. Speak truth to power... so long as a Republican is in power.

CBS’s propaganda was sponsored by Colgate and Toyota. Click on the link to let them know how you feel. 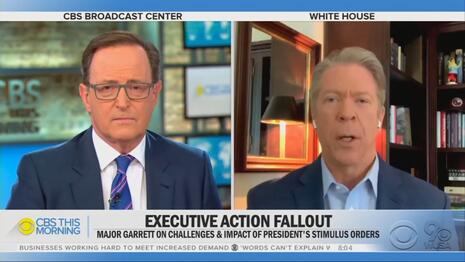 ANTHONY MASON: For more on the President's executive action, we're joined by chief Washington correspondent m Major Garrett. He's always of The takeout and the Debrief. Major, good morning. We just heard from Nancy Pelosi. But the push back has been bipartisan. Republican Senator Ben Sasse of Nebraska called the executive orders unconstitutional slop. So, what is the President actually trying to accomplish here?

MAJOR GARRETT: Look, the President loves headlines, declarations, and the appearance of action. So, what his supporters hear is, “Congress is stuck, there's an impasse. The President acted.” That's the headline, the declaration. You'll hear that from the White House. Congress didn't move, and the President did. The problem for the White House is most of these interventions are complicated. Some are unworkable. Many could be challenged in court. So if the President wants to sort of shock the system and get negotiations up and running again, this isn't much voltage. It's kind of like static electricity. Memorably for a moment you remember it, but it's mostly annoying and doesn't really solve the problem.

MASON: Yeah. And does he actually have the power to do this?

GARRETT: In some cases he does. This move on pay roll taxes resembles, it's not exact, but it resembles something that President Obama did during the great recession. So, there is some legal authority there. But it is unclear if businesses will follow this because they want to know that they can actually withhold these payroll taxes. If they do, people's paychecks will be slightly more generous. But on the other things, with evictions, college age, most of those things are memorandums, intentions from the President. No real legislative language. Everyone in Washington knows if you want to solve these problems, you have to legislate, not send executive memos.

MASON: Because a lot of people are feeling desperate right now with some of this due to expire. I mean, how much help is actually in here for people?

GARRETT: Well, let's look at the unemployment benefits. It is dependent on states finding the revenue to supplement what the federal government is going to provide. The federal government will provide that, by the way, by taking money away, billions of dollars from disaster relief assistance. So if there's more hurricanes, which the national weather service predicts we will have, or wildfires, that's going to be depleted. So, that's a problem. And states right now, all of them, are financially strapped. Why? Because the lock downs have depleted their revenue stores. So even if the President is successful, it will be required for states to step in and assist him. Many can't do that. That is one of the very reasons this is problematic and probably won't provide the aid on unemployment benefits Americans need right now.

MASON: You say any long-lasting relief will have to come from Congress. What's the prospect of that now given their differences?

GARRETT: Congressional Democrats see this as action, and they know the President will grab and did grab some headlines. They need to re-engage with the White House. The White House also knows this is not sufficient to meet the economic tests that the pandemic continues to press for the country. So negotiations will likely resume. Congress has not gone on recess for the summer as it typically does. Lawmakers are waiting for a resolution and, specifically, Senate Republicans up for re-election need something to vote for. By acting with memoranda, the President is leaving them in the cold. They need a deal as much as the White House does. You'll see pressure from senate Republicans to restart talks.