Morning Joe co-host Mika Brzezinski went on an unhinged, emotional rant about Fox News on Friday, decrying the network as full of “puppets” who need to rediscover the “goodness” and “objectivity” inside them. Yes, someone on MSNBC said this. Apparently angry because Sean Hannity mocked her husband, Joe Scarborough, on Thursday night, Brzezinski fumed, “We often try and sort of stay away from our colleagues in the business, but Fox News has several puppets for this President constantly going on the air, constantly repeating what he says verbatim.”

Claiming that she doesn’t really want to trash her competitor over at Fox, Brzezinski lobbied for a return to peace and goodness: “We try and stay away from it. We try and hope that Fox News will do their best, that there are other hosts on the network that really step up and do the right thing. We hope that prevails. We hope that goodness prevails, and we hope that ability to be objective prevails, and try to put the facts first. But we repeatedly see it not happening on certain shows.”

Objectivity? Goodness? Facts first? The idea that anyone at MSNBC’s Morning Joe would claim the high ground on this is ludicrous. The co-hosts have routinely compared their political opponents, including Trump voters, to Nazis who have similarities to Hitler.

Goodness? On Memorial Day weekend in 2012, MSNBC host Chris Hayes admitted he was “uncomfortable” calling fallen soldiers heroes. Facts first? MSNBC is a network that still employs Brian Williams, a man who lost his NBC Nightly News anchoring job after telling repeated lies about (among other things) being shot down while in Iraq.

As for who to blame about Donald Trump? How about Brzezinski and Scarborough? As National Review recounted in 2017, they have been some of his biggest backers (when it was convenient for their ratings). Click "expand" to read an excerpt.

This month, MSNBC host Joe Scarborough escalated his attempt to portray himself as a committed leader of the Trump opposition: He announced that he was leaving the Republican party and wrote that “Trump’s Republicans have devolved into a party without a cause, dominated by a leader hopelessly ill-informed about the basics of conservatism, U.S. history and the Constitution.” Somehow, Scarborough appears to have forgotten how he repeatedly covered for Trump as the latter bulldozed his way to the White House — or perhaps Scarborough hopes others will forget if he criticizes Trump enough.

Yet in November 2015, Scarborough praised Trump (“I think the one thing that Donald Trump has . . . and that Ronald Reagan had, was the genius of knowing that the greatest thing he had going for him was always being underestimated”); disclosed how he had reached out to Trump to provide political advice (“I’ve actually called him up, and I said, ‘Donald, listen, you need to speak in complete sentences in debates . . . You should read before a debate! . . . Read a paragraph on Syria, read a paragraph on education reform!’”); gushed over Trump’s supposed strength (“what Donald Trump brings is gut instinct and strength”); and pushed the false narrative that Republicans consistently lose (“Republicans are so tired of losing on the presidential level that they want strength”).

However, February was perhaps the busiest month for Scarborough and Trump. Scarborough visited Trump in his hotel during the New Hampshire primary on February 9, and the next morning Trump thanked Scarborough and Mika Brzezinski for being “supporters” and “believers.” The Morning Joe hosts challenged these labels, but actions speak louder than words: Trump appeared on the show far more than his GOP rivals, and he was allowed to call in — thus providing Trump with a nationwide audience without the inconvenience of leaving the campaign trail or expending resources.

If Brzezinski doesn’t like a competitor criticizing her co-host and husband Scarborough, then just say that. But it’s hard for MSNBC journalists to take the moral high ground. 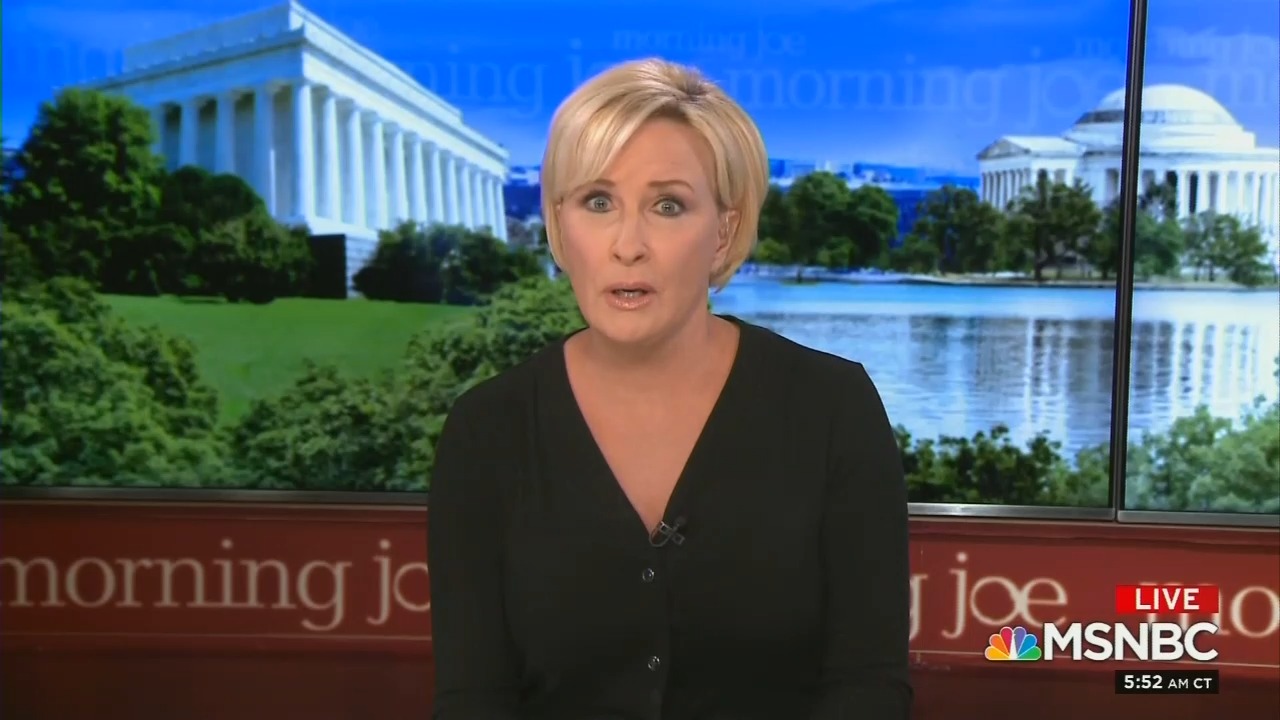 MIKA BRZEZINKSI: So much happened yesterday during that briefing. There was so much to cover. So many layers of disinformation and undermining of the top scientists of the President's. There was a lot to cover. We often try and sort of stay away from our colleagues in the business, but Fox News has several puppets for this president constantly going on the air, constantly repeating what he says verbatim. Going after his quack ideas of Hydroxychloroquine, trying to find quack people to put on the air to back up the president's unproved claims.

BRZEZINSKI: There are folks on Fox News that we usually stay away from, who just take these ideas and run with them. Because it makes Trump happy. Because they speak for him. Because they speak on a daily basis and get their message straight. Sean Hannity, this is on March 9th, "They're scaring the living hell out of people. I see this, like, ‘Oh, let's bludgeon Trump again with this new hoax." These people are working for Trump behind the scenes. We try to stay away from it.

We try and stay away from it. We try and hope that Fox News will do their best, that there are other hosts on the network that really step up and do the right thing. We hope that prevails. We hope that goodness prevails, and we hope the ability to be objective prevails, and try to put the facts first. But we repeatedly see it not happening on certain shows. Last night, Sean Hannity went after Joe at the top of his show for quite a long time. Perhaps it was too tough to take the president's ridiculous ideas and make them into a reality for his viewers and put viewers at risk. Perhaps it was even too much for Sean Hannity. He had to find some kind of foil to go after. It's just got to stop at some point. I mean, really, it's best put together by, believe it or not, The Daily Show, which put together this montage of these fox hosts and their friends in the White House, pushing the president's ideas verbatim. Take a look.