CBS This Morning co-host Tony Dokoupil on Friday played strategist for Bernie Sanders. Dokoupil suggested that the socialist Sanders just stop calling himself a socialist. He didn’t advise  the 2020 candidate to stop being a socialist, just to maybe not call himself that.

Turning into a PR agent, Dokoupil declared, “You have got this label stuck to you, socialist. You have got someone from your own party, the Democratic Party, saying they don't want socialism in South Carolina referring to you. I know there's a difference between democratic socialism and socialism but why do you cling and hold on to that label, Democratic socialist, when it seems to confuse people and give your enemies and critics an opportunity to bash you?”

After Sanders ranted about “the fossils fuel industry receiv[ing] tens of billions of dollars a year in subsidies and tax breaks,” Dokoupil again acted as a worried adviser: “Senator, is the label confusing people and allowing critics to hurt you politically?”

Co-host Anthony Mason offered the tired (and false) claim that the non-Sanders candidates are “moderates,” saying of New Hampshire: “The results there still show a significant split in the party between the moderates and the left.”

A Media Research Center analysis by Geoffrey Dickens explained that Amy Klobuchar, Pete Buttigieg and others are anything but centrists. But with Sanders now leading the entire Democratic field with a frontrunner status, perhaps some in the media will shift to a new strategy: Getting the socialist candidate to stop calling himself a socialist.

As the MRC’s Kyle Drennen explained on February 3, CBS host Dokoupil promoted socialism on the network with... pie:

Viewers of Friday’s CBS This Morning could have been forgiven for thinking they were watching a comedy skit when Dokoupil was shown standing in the middle of a shopping mall asking baffled bystanders if they wanted to talk about economic inequality. After getting several nos and a few odd looks, the morning show anchor held up a pie and proclaimed: “This is the American pie!”

ANTHONY MASON: Democratic presidential contender Bernie Sanders is looking to build more momentum in the upcoming Nevada caucus and South Carolina primary. His victory in New Hampshire on Tuesday puts the independent senator from Vermont in second place in the delegate count with 21. Former Mayor Pete Buttigieg leads with 23. Senator Sanders joins us from Dulles, Virginia on his way to campaign in North Carolina. Good morning, Senator. Thanks for being with us.

MASON: Congratulations on the victory in New Hampshire. But the results there still show a significant split in the party between the moderates and the left. Your — As we mentioned upcoming is the — upcoming primary in South Carolina and one of the two Democratic congressmen there just said “We don't want socialism.”  How do you broaden your constituency?

We're taking on the political establishments, the Republicans and Democrats. At the end of the day the agenda that we have which says if you work 40 hours a week in America you should not be living in poverty. Raise that minimum wage to 15 bucks an hour. Make sure that all of our kids have the opportunity to get a higher education regardless of their income. That's the agenda the American people want. The establishment may not like it. That's what the American people want. That’s why we’re going to win. 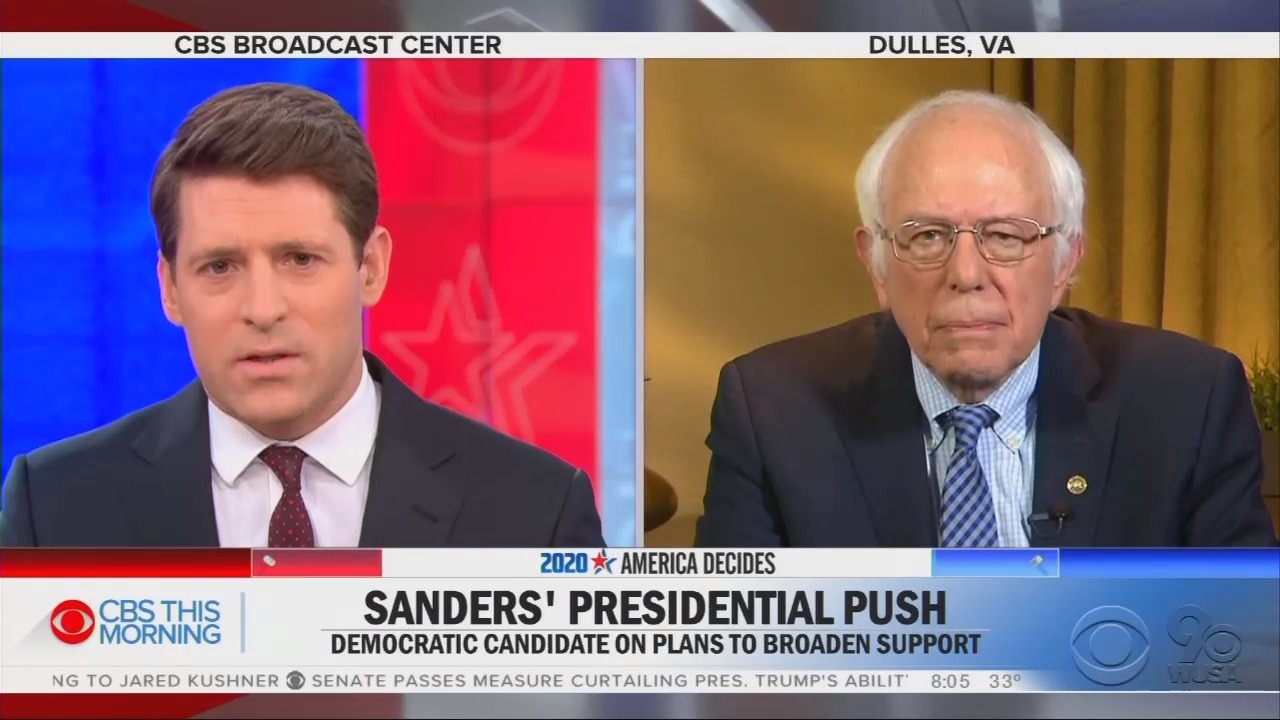 TONY DOKOUPIL: Senator, I'm curious: You have got this label stuck to you, socialist. You have got someone from your own party, the Democratic Party, saying they don't want socialism in South Carolina referring to you. I know there's a difference between democratic socialism and socialism but why do you cling and hold on to that label, Democratic socialist, when it seems to confuse people and give your enemies and critics an opportunity to bash you?

SANDERS: Well, let me just tell you, in my view, to a significant degree we're living right now under Donald Trump and a socialist society. The only difference is does the government work for working people or does it work for billionaires? Donald Trump, before he came president, when he was in real estate, he received $800 million in tax breaks and subsidies from the government. Socialism for the rich. The fossils fuel industry receives tens of billions of dollars a year in subsidies and tax breaks.

DOKOUPIL: Senator, is the label confusing people and allowing critics to hurt you politically?

SANDERS: Well, I did win the popular vote in Iowa. I did win the popular vote in the primary in New Hampshire. I think we're going to win in Nevada. I think we're win in South Carolina. Working people under that we got to finally stand up to the corporate elite and that we have to have a mass political movement of working people and low-income people and young people to do that. So I'm not worried about labels. We'll define ourselves not let other people define us.

JERICKA DUNCAN: Speaking of those wins in Iowa and New Hampshire, you actually trail in the polls. A recent Quinnipiac poll with black voters compared to Bloomberg and Biden. How do you plan to beat those candidates in a more diverse state?

MASON: Senator, the DNC just changed the rules which could allow Mr. Bloomberg to appear in the next debates. Do you think he should be on the debate stage?

DOKOUPIL: Senator, lets jump ahead to the prospect of a Sanders administration. You got these ideas. If you're elected how do you get them through a logjam in the Senate?

DUNCAN: Senator Sanders, we thank you for your time.