CBS This Morning journalists on Tuesday credulously promoted 2020 Democrat Pete Buttigieg’s “moderate”-sounding health care plan: “Sounds pretty good,” touted co-host Tony Dokoupil. The CBS hosts all liked the selling of the plan as “Medicare for all who want it” instead of Medicare for all.  “I love the phrasing,” cheered Anthony Mason.

Reporter Ed O’Keefe hailed, “[Buttigieg is] hoping to gain support for sure and definitely wants to talk up this idea because he sees it as a more moderate alternative to Medicare for all.” O’Keefe didn’t explain that his plan may sound moderate only in terms of being compared to, say, outright socialism of Bernie Sanders.

If you remember Barack Obama’s claim, “If you like your health care plan, you can keep it,” Buttigieg’s ideas may sound similar. (Remember, that was deemed the 2013 “lie of the year” by PolitiFact.) Buttigieg insisted, “I also believe Americans ought to be able to decide for themselves” about keeping their health care plans.

However, this exchange followed:

ED O’KEEFE: So the ultimate end goal is a government-run health care system? 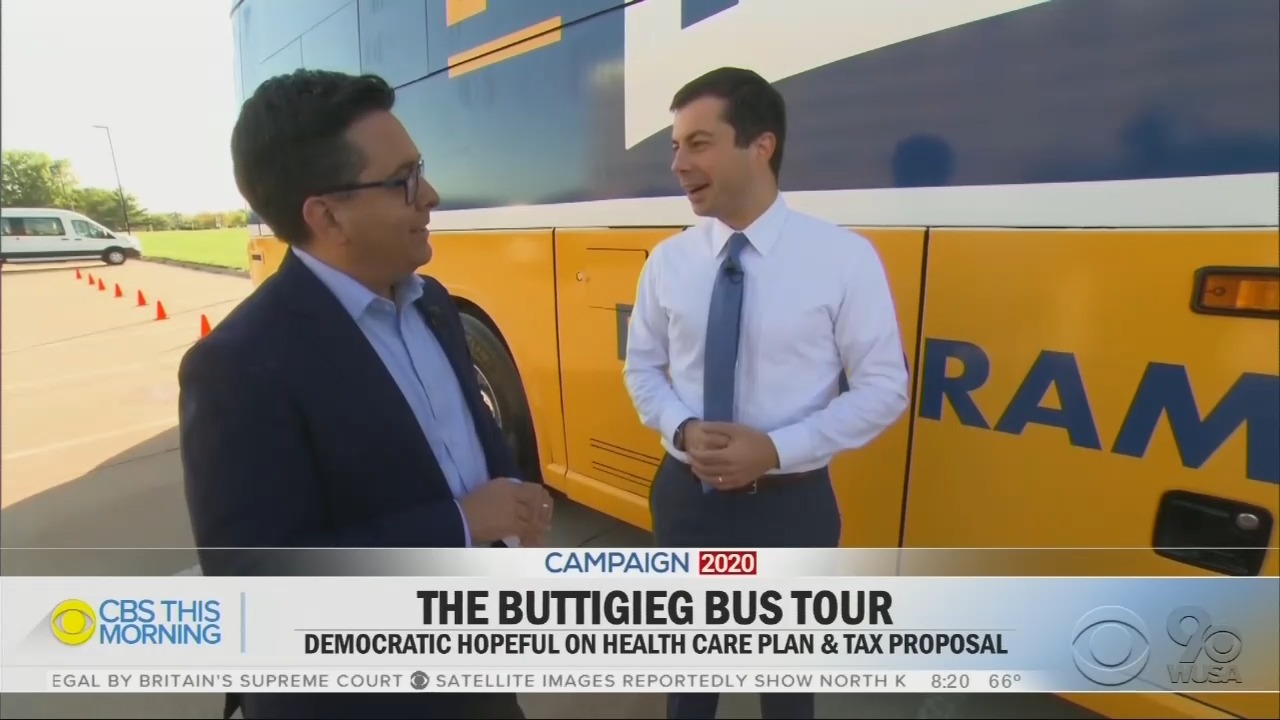 O’Keefe didn’t follow up with the obvious point that if “almost everybody” is going into government-run health care, that’s not going to leave much reason for private companies to continue to offer their plans.

O’Keefe managed this retort: “Does your plan require a tax increase for middle class Americans?” However, the This Morning crew quickly moved on to hyping the PR spin of the plan. Mason congratulated, “I love the phrasing of Medicare for all who want it.”

Gayle King echoed, “I agree. I like that too.” Dokoupil credulously marveled, “If you want it, come and get it. And also no tax increase! Sounds pretty good.” The plan is generously estimated at just $1.5 trillion.

What ever happened to tough, cynical journalists who speak truth to power?

A transcript of the segment is below. Click "expand" to read more.

ANTHONY MASON: South Bend Indiana Mayor Pete Buttigieg began his first campaign bus tour in Iowa by talking with voters about health insurance. He is hoping that his plan, Medicare for all who wants it, sets him apart from other Democratic presidential candidate. Our CBS News battleground tracker poll shows health care is very important for nine out of ten Democratic voters in early contest states, including Iowa. Ed O’Keefe spoke with Buttigieg on his bus, an interview that you'll only see on CBS This Morning." What is he hoping to gain from this bus tour?

ED O’KEEFE: He's hoping to gain support for sure and definitely wants to talk up this idea because he sees it as a more moderate alternative to Medicare for all. And he is trying to convince Iowans that they should vote for a 37-year-old Afghanistan war veteran, Rhodes scholar, small city mayor who is also openly gay. Only one in five likely Democratic caucus goers have made up their mind about who to support. And we asked the mayor how he plans to win over undecided voters? How do you convince everyone else over the next 130 or so days that you are the guy they should vote for?

PETE BUTTIGIEG: Well, They should see you in action. You're going to see, in addition to the national conversations that I'm having in places like the Democratic debates, you're going to see me on the ground here Iowa directly, making the case to voters. I think people are looking, not only looking for a set of policies, but for a kind of leader who is going to lead us in a very, very different place than the current president is. And this is my opportunity to show, as well as tell, what kind of leader I will be for the American people.

O’KEEFE: Buttigieg is using the bus tour to talk up his “Medicare for all who want it” health care plan.

BUTTIGIEG: Medicare for all who want it means we take a version of Medicare and make it available for every American. I believe that this will be a better option than any of the private plans out there. I also believe Americans ought to be able to decide for themselves.

O’KEEFE: So the ultimate end goal is a government-run health care system?

O’KEEFE: Does your plan require a tax increase for middle class Americans?

BUTTIGIEG: No. We can fund what I am proposing without raising taxes on any but perhaps the it the top two percent. I believe the tax code needs to be fairer. There are corporations and wealthy Americans who should be paying their fair share and aren't. And we're going to adjust that, not just in order to fund our health care plan. But in order to finance the needs of the country. It’s not punitive. It’s not unreasonable.  It's just what we need in order to make sure that we move forward as a country.

O’KEEFE: Buttigieg’s is ranked fourth in the latest Iowa poll. Nobody quite like him has ever run for president before. The 37-year-old has been married to his husband band Chastin for just over a year. Have you talked about what we would call him, were you to be elected president?

BUTTIGIEG: Well, around South Bend, he’s the first gentlemen. So, I imagine he’d be the same thing when he’s in the east wing of the White House too.

O’KEEFE: Do you think the nation is ready for a first gentleman?

BUTTIGIEG: Yeah. And I think they are definitely ready for a first gentleman like Chastin.

O’KEEFE: I asked the mayor if the historic nature of his campaign has set in yet. He said he’s conscious of it, pointing to moment son the trail when people his parents age are emotional because they didn’t think something like it was ever going to be possible in their lifetime.

MASON: I love the phrasing of Medicare for all who want it.

O’KEEFE: There if you need it.

GAYLE KING: It will be interesting to see how people respond to that. I agree. I like that too.

MASON: In “three meals,” yesterday, we saw that there are a lot of people who are upset that their private insurance will get taken away.

TONY DOKOUPIL: If you want it, come and get it. And also no tax increase! Sounds pretty good.