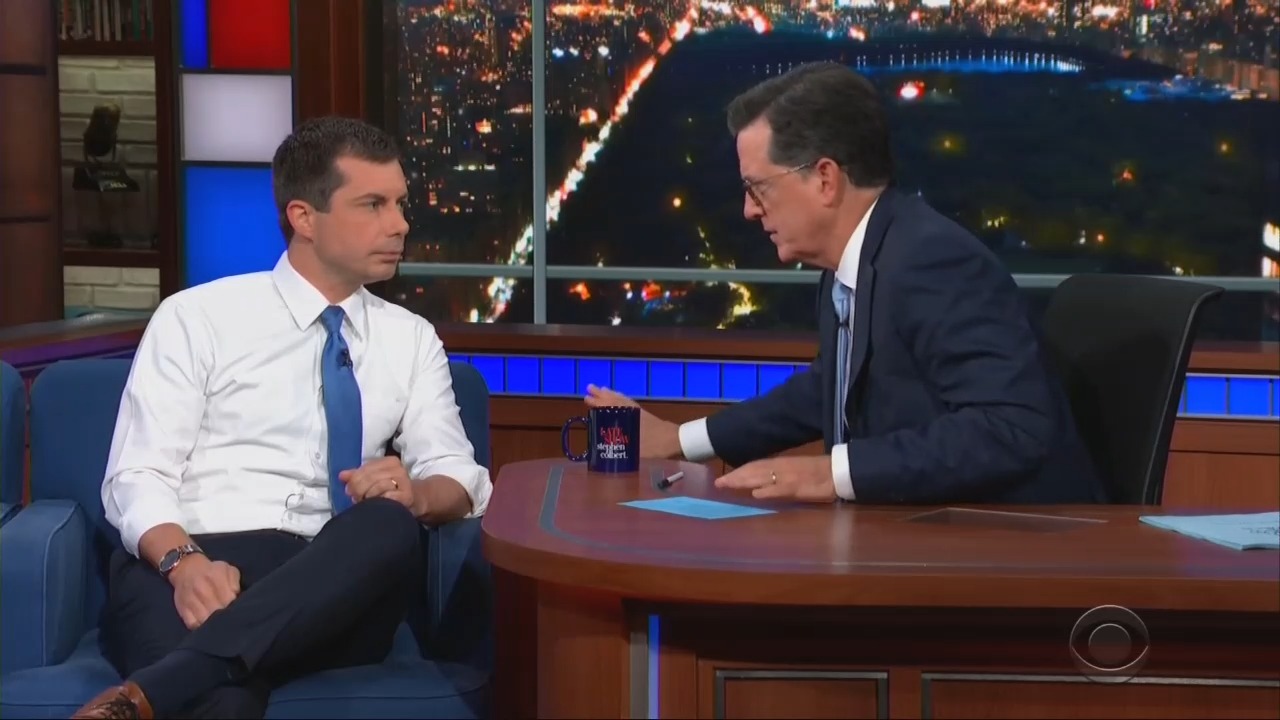 Stephen Colbert’s Late Show has become a required stopping point for 2020 Democrats. Making it clear that he has no interest in bipartisan jokes, Colbert is basically stumping for all the contenders. On Thursday’s show, the host tried to pretend that Mayor Pete Buttigieg isn’t extremely liberal.

Talking to the man who has hard-left views on guns, abortion, wants to pack the Supreme Court and eliminate the electoral college, Colbert seized on Buttigieg’s use of the term "ideological centrism." The comedian pretended, “So, when you say ideological centrism... are you saying that to make sure you don't get pigeonholed into the things the press seems to be talking about. You’re either incrementalist or your radical change. Where do you fall in that artificial split?”

Buttigieg conceded, “I view myself as a progressive philosophically.” Of course, when the Democrat mentioned his plans to pack the Supreme Court and eliminate the electoral college, Colbert didn’t push back:

When I talk about the fact that we need to reform the Supreme Court or that we need to start if we want to call ourselves a democracy, we ought to pick our president by just counting up all the votes and giving it to the person who got the most, I don’t think you have to be particularly left of center to believe that.

When then-2020 candidate Kirsten Gillibrand announced on his show, Colbert held hands with her. Also in January of 2019, the host tossed softballs to another 2020 Democratic contender, Senator Kamala Harris. He gushed, “What makes you happy? Where does your hope come from?”

COLBERT: At the CNN town hall on climate change, seven hours, what hour did they consign you to?

MAYOR PETE BUTTIGIEG: I think I was the fifth hour. I was really impressed with the CNN folks, the crew were holding up.

COLBERT: How did the audience hold up for that long?

PETE BUTTIGIEG: I think they swapped them out every now and then.

COLBERT: Hosed them down and sent them back in.  Last night in the town hall climate change, you called the climate change a sin.

COLBERT: In what way is climate change a transgression of God's laws?

BUTTIGIEG: I'm not out to impose my faith on anybody else --

COLBERT: Is this Sharia law?

COLBERT: Oh, you’re telling me you don’t have Sharia law?

BUTTIGIEG: Our Sharia law is called the book of common prayer, and there's a lot of stuff in there about the environment. There's a lot of stuff in there about stewardship for creation. To me, environmental stewardship isn't just about taking care of the planet, it's taking care of our neighbor, we're supposed to love our neighbor as ourselves. The biggest thing with climate change isn’t just going to hurt the planet, in some way shape or form the planet will still be here, it's that we're hurting people. People who are alive now and people who are born in the future, the way I see it, I don't imagine God's going to let us off the hook for abusing future generations anymore than you would be off the hook for harming someone right next to you. And with climate change, you’re doing both.

COLBERT: One thing that's sort of interesting to me is that you are the candidate, as far as I can tell, who is talking about their personal faith more than the other candidates on the Democratic side, and the GOP has gone a long way over the last generation of trying to make themselves the Christian party or the party of faith. Where do you see faith properly influencing your job as a politician?

BUTTIGIEG: We can talk all day about whose plan has the exact right year for which target we're going to de-carbonize. And obviously I think mine is the best, but so does everybody else. The real question is what's it going to take to get it done this time? And that, I think, is a matter of breaking from the past and bringing a different approach to rallying Americans not necessarily through ideological centrism but enlisting Americans in the name of the values we share to get something done before it's too late.

BUTTIGIEG: So, look, I view myself as a progressive philosophically. I also think there's more to this than this just left of center line. When I talk about the fact that we need to reform the Supreme Court or that we need to start if we want to call ourselves a democracy, we ought to pick our president by just counting up all the votes and giving it to the person who got the most, I don’t think you have to be particularly left of center to believe that.