Colbert Embarrasses Himself With Softballs to Dem 2020 Contender: ‘What Makes You Happy?’

Liberal Late Show host Stephen Colbert has no problem trashing conservatives and Republicans in the nastiest manner. But when hard-left Democratic Senator Kamala Harris appeared on his show, Thursday, he turned into an excited fan boy. Discussing the California politician’s new book, Colbert gushed, “What makes you happy? Where does your hope come from?”

The host pushed Harris on a possible presidential run, wondering, “Many people who put out books two years before a presidential election do so to introduce themselves in a broad way to the American people.... Are you going to run for president?”

After responding, “I might,” Harris dissolved into a weird fit of laughter.

Colbert closed by prodding the possible 2020 contender to come back: “Please join us again when you may run for president.”

In a past episode, the host called God a socialist while praising Alexandria Ocasio-Cortez. In December, he lobbied for gun control. That same month, while referring to alleged sexual predator Les Moonves, the former CEO of CBS, Colbert snapped that he would “still be better than Trump.” 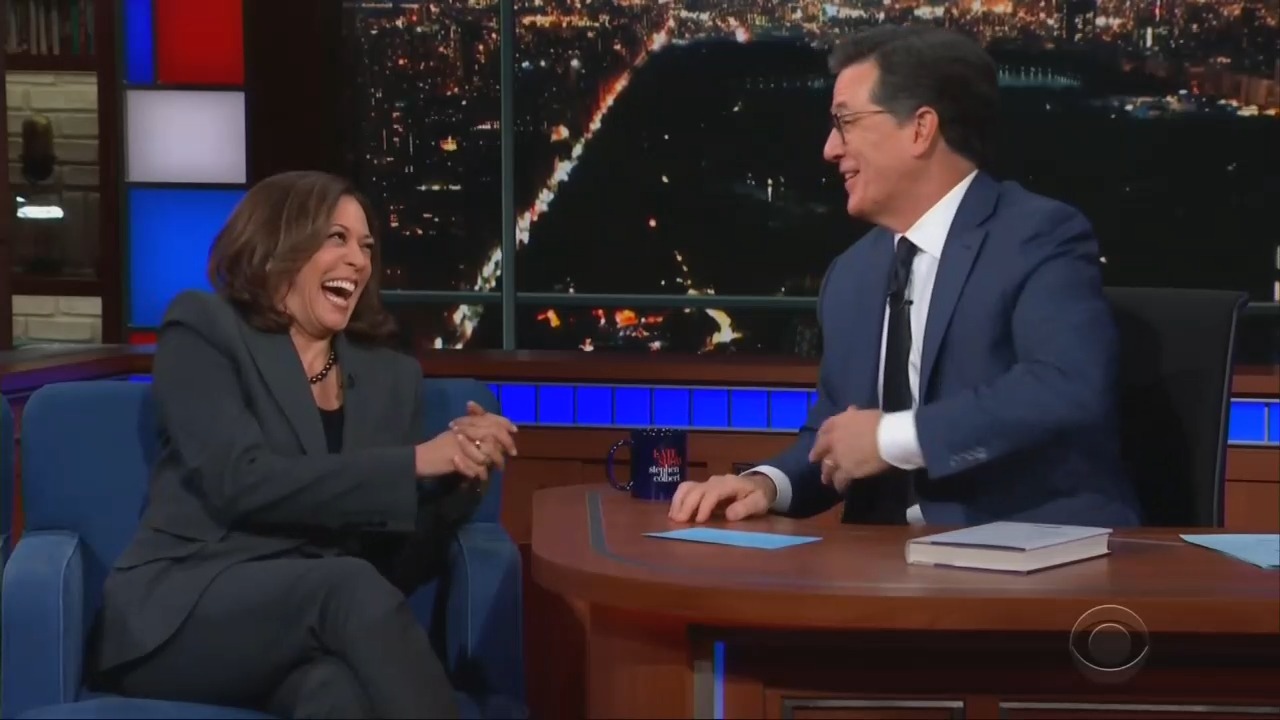 STEPHEN COLBERT: Shutdown is still going on. Day 20. Tomorrow’s going to be a record if it gets to Saturday will be a record of 22 days. Any updates? You're in the Senate. What's the chatter like in the cloak room?

COLBERT: The buzz is that the Republicans are cracking a bit underneath the pressure and sort of the blame that the President who they have backed wholly. Are they cracking? When the cameras are off and you're in the cloak room, are they cracking or is that just the sound of the ancient dry skin?

COLBERT: How do you imagine this ends?

COLBERT: We're here with our guest senator Kamala Harris of California. Senator, let me ask you this: many people who put out books two years before a presidential election do so to introduce themselves in a broad way to the American people. Um —  are you going to run for president?

COLBERT: That's it! All right! There you go! There's your headline right there! There's been some reporting that you will announce this on MLK Day, January 21. Should I keep my schedule open that day, or should I drink a lot of cough syrup and wake up on the 22nd?

HARRIS: We should always honor the great Dr. Martin Luther king on January 15th and on MLK weekend.

COLBERT: You look so happy on the cover. What makes you happy? Where does your hope come from?

COLBERT: You also have another book.

COLBERT: I thought maybe you weren't going to run for president because children can't vote. I don't know why you would write a book for them.

COLBERT:  Please join us again when you may run for president.