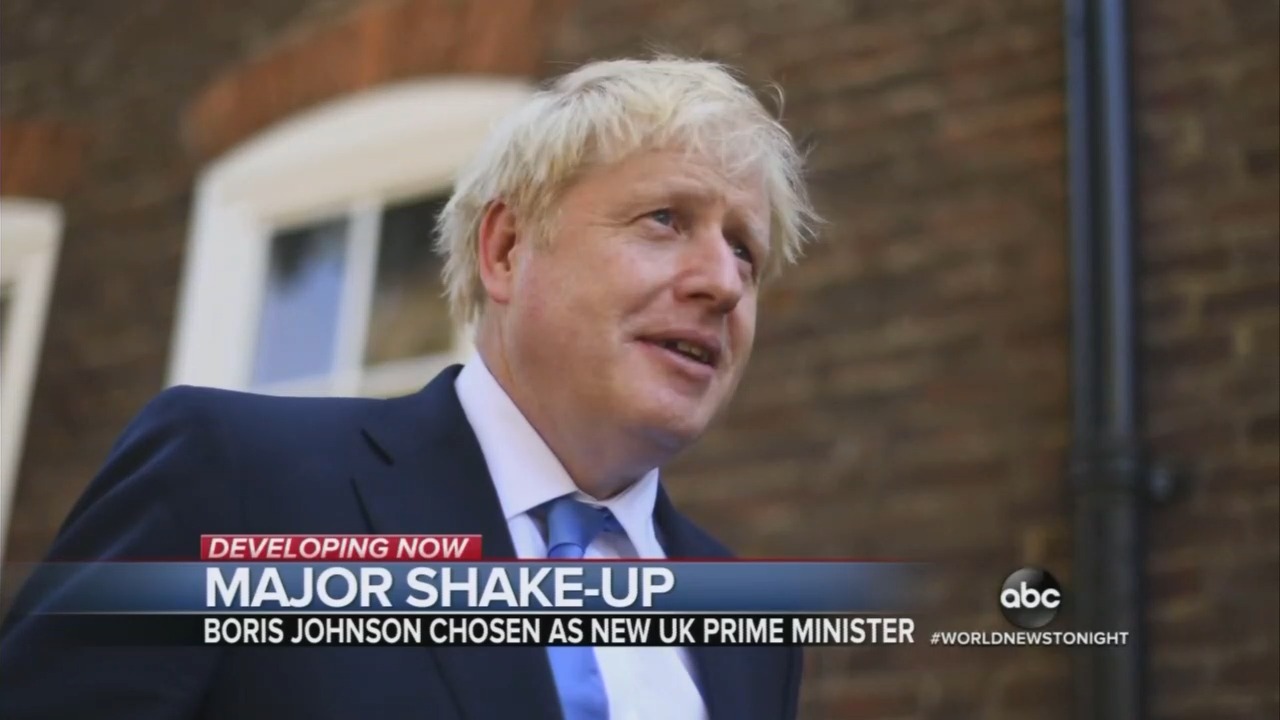 All three networks on Tuesday night offered up mocking, derisive reports on Brexit-supporting Boris Johnson winning his party's support and becoming the new British Prime Minister. ABC, CBS and NBC also highlighted comparisons of the conservative leader to Donald Trump. On World News Tonight, senior foreign correspondent Ian Pannell derided, “To his opponents, he's an ambitious philanderer, unfaithful in marriage, accused of racism and of having no fixed principles. Many have compared him to Donald Trump.”

The CBS Evening News played old video of Johnson getting caught on a zip line in 2012. Correspondent Elizabeth Palmer dismissed,  “It may not always look like it, but this is Britain's new prime minister and it's shaping up to be quite the show.”

Increasing the condescension even more, she concluded that “Brexit, of course, makes this a very critical time for Britain.... So people are looking for the serious Boris, the strategist, the leader, not just Boris the clown.”

On NBC Nightly News, foreign correspondent Bill Neely hit Johnson as “divisive”: “And he's divisive like President Trump. Blonde, brash, a populist, and born in New York. Once critical of the President.”

What is Boris Johnson’s real crime? He’s a conservative who has backed Brexit and Britain’s opportunity to free itself from the European Union. In 2016, these same networks exploded over Brexit, lobbying for a “do-over” to “overturn” the country’s “worst decision.”

Transcripts of the segments can be found below:

NORAH O’DONNELL: To Britain now. Today Boris Johnson was chosen to be the next prime minister. The man with the unruly blond hair was one of the loudest voices demanding Brexit, Britain's divorce from Europe. Elizabeth Palmer reports he now has a bit more than three months to finalize it.

ELIZABETH PALMER: Britons either love Boris Johnson or they loathe him, and he knows it.

BORIS JOHNSON: There will be people around the place who will question the wisdom of your decision.

PALMER: But his supporters believe Bojo, as he's known, will rally people with his wit and buffoonery, That this will lift the country's spirits and find a solution to Brexit, Britain’s agonizing efforts to leave the European Union. Alexander Boris de Pfeffel Johnson was born in New York, the son of a British diplomat. After Oxford University, he became a journalist, and was fired for making up quotes. But that old Bojo macgic kicked in and he made a  comeback, eventually becoming mayor of London. He once accused Donald Trump of stoupifying ignorance.

BORIS JOHNSON: That him, frankly, unfit to hold the office of president of the United States.

PALMER: But that was then, and this is now. The two men seem determined to get along, judging by the President's comments at a rally earlier today.

DONALD TRUMP: Boris is good. He's going to do a good job.

PALMER: It may not always look like it, but this is Britain's new prime minister and it's shaping up to be quite the show. Brexit, of course, makes this a very critical time for Britain, Norah. So people are looking for the serious Boris, the strategist, the leader, not just Boris the clown.

LESTER HOLT: One of America's closest allies has a new leader. Boris Johnson, London's outspoken former mayor, has been named U.K. Prime minister. He has a big task ahead of him, steering through the chaos of Brexit. NBC's bill Neely is in London tonight.

BILL NEELY: It’s the job he craved, but tonight he inherits a crisis. Boris Johnson trying to reassure a divided nation in maverick style.

BORIS JOHNSON: I say to all the doubters, dude, we are going to energize the country. We're going to get Brexit done.

NEELY: And he's divisive like President Trump. Blonde, brash, a populist, and born in New York. Once critical of the President.

JOHNSON:  I think Donald Trump is clearly out of his mind.

NEELY: Johnson now wants a trade deal. America's top ally now led by the eccentric successor to successor to Theresa May whom Brexit destroyed. Johnson wants Britain out of Europe by November.

NEELY: Today Johnson called this a pivotal point for Britain. Tomorrow he starts work in there. And not much time for him, Lester, to unite this skeptical country.

DAVID WEIR: Oversees tonight, a new prime minister tonight in the U.K. Boris Johnson, was a champion of Brexit and many have compared him to President Trump. But what he said about the president before. ABC's senior foreign correspondent Ian Pannell from London tonight.

IAN PANNELL: He's one of Britain's most controversial and divisive figures. And tonight, Boris Johnson is set to become the new prime minister.

BORIS JOHNSON: We are once again going to believe in ourselves and what we can achieve and like some slumbering giant, we are going to rise and ping off the guy ropes of self-doubt and negativity.

PANNELL: He led the Brexit campaign to bring Britain out of the European Union. Never shy for the cameras, even when things go horribly wrong. But to his opponents, he's an ambitious philanderer, unfaithful in marriage, accused of racism and of having no fixed principles. Many have compared him to Donald Trump, though he was once deeply critical.

BORIS JOHNSON: I think he's betraying a quite stupefying ignorance, that makes him, frankly, unfit to hold the office of president of the United States.

PANNELL: So, tomorrow, Theresa may moves out of downing street and Boris Johnson move ins. But he'll inherit far more than the house and the job. He'll have to deliver Brexit by Halloween.