Journalists on all three networks on Monday continued to howl with outrage over Britain’s decision to exit the European Union. Reporters on ABC, CBS and NBC attacked the “worst decision” that could lead to “economic disaster.” On the Today show, analyst Jim Cramer assailed, “In terms of the financial chaos and collapse, it’s just one of the worst moves I’ve seen.”

He derided the British voters as “completely unprepared” to make last week’s decision. On Good Morning America, Terry Moran reported live from London and fretted, “People are in shock here. It's all anyone can talk about and they're worried about what happens next to their jobs, to their house prices, to their savings.”

Providing anecdotal evidence, Moran concluded, “They're clamoring for another vote. This morning in Britain, buyers' remorse. Millions of people looking for a do-over.” To be clear, the vote to leave garnered 17,410,742 votes, 1.2 million more votes than the remain campaign. Three million have called on a revote. There’s no evidence, at this point, that large numbers are coming from leave voters. 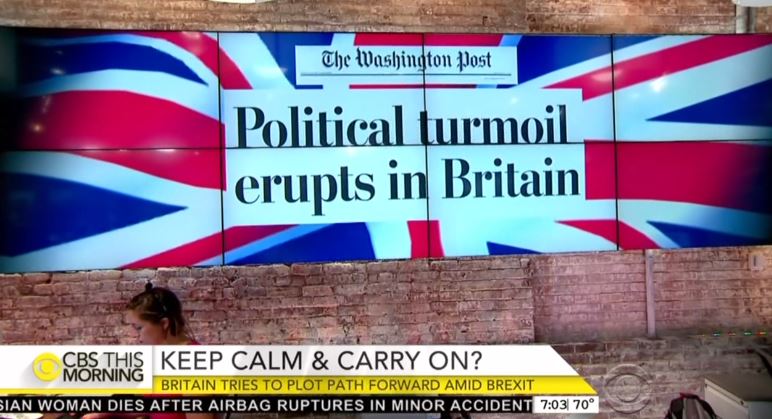 The journalist concluded with this mocking connection: “As one official said, ‘When Vladimir Putin is cheering, you know you've got a problem.’” (On Friday, ABC ignored the fact that Barack Obama tried and failed to stop Brexit.)

On CBS This Morning, Charlie Rose hyperventilated, “British leaders are trying to quiet growing fears of economic disaster after the vote to leave the European Union.” Reporter Charlie D’Agata condescended, “Last week the word was Brexit. Today is Bregret with Brits wondering if anything can be done to overturn the decision."

On Friday, CNN's Christiane Amanpour suffered a liberal meltdown. She shrieked that Brexit is a win for "white identity" politics and xenophobia. 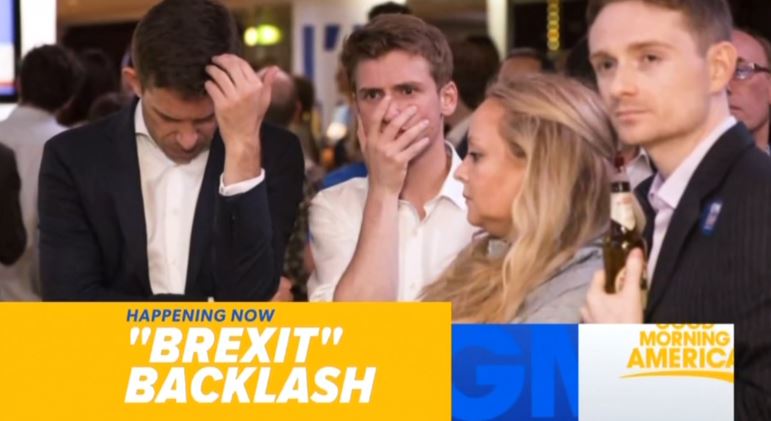 GEORGE STEPHANOPOULOS: Bracing for Brexit. Millions in Britain call for a do-over. Big questions here at home. All eyes on the market after the Dow's 600-point drop. We're live at the stock exchange.

STEPHANOPOULOS: Now to the fallout overseas. Britain's historic decision to leave the EU shaking up not just the markets but the whole political landscape. Now, millions are signing a petition asking for another chance. ABC's Terry Moran has the latest, joins us this morning again from London. Good morning, Terry.

TERRY MORAN: Good morning, Robin. Well, people are in shock here. It's all anyone can talk about and they're worried about what happens next to their jobs, to their house prices, to their savings and as you point out, there are millions in Britain who want another chance. They're clamoring for another vote. This morning in Britain, buyers' remorse. Millions of people looking for a do-over.

WOMAN: People need to reconsider and I think it would be great to have another vote.

MORAN: More than three million people here have signed a petition demanding another referendum on whether Britain should leave the European Union.

MAN: I think it's ludicrous to have another referendum. You know? We can't just keep going, can you? We have to move on.

MORAN: Britain's political system is in chaos. There is no plan on how to get out of the EU and businesses are freezing investment and hiring, plunging markets into turmoil. Early this morning the UK finance minister trying to calm things down.

GEORGE OSBORNE: It will not be plain sailing in the days ahead but let me be clear, you should not underestimate our resolve. We were prepared for the unexpected and we are equipped for whatever happens.

MORAN: And former London Mayor Boris Johnson, who wants to be the next prime minister also desperate to calm the waters.

BORIS JOHNSON: People's pensions are safe. The pound is stable. The markets are stable.

MORAN: But emotions are so intense here right now. Listen to this voter on the BBC firing a question at a panel of politicians.

MAN: After decades of ignoring the working class, how does it feel to be punched in the nose?

MORAN: Well, with all that emotion and turmoil, there are real consequences for the U.S. Britain's is America's closest ail eye will the world, especially in Europe so on free trade, on terrorism, on standing up to Russia that relationship is weakened. As one official said, “When Vladimir Putin is cheering, you know you've got a problem.” George.