IRONY: Disgraced Dan Rather Insists That Liars Be Called Out as Liars

Dan Rather doesn’t have any self awareness. The disgraced ex-CBS anchor, who resigned in the wake of an early example of fake news, went on CNN, Sunday, to insist that liars need to be called out for their falsehoods. Appearing on Reliable Sources with Brian Stelter and defended the so-called liberal “Squad” of Democratic congresswomen. Saying of Donald Trump, Rather insisted, “He lies repeatedly about the four young women congresswomen. He has lied repeatedly.”

This is a man who used phony documents in 2004 in an attempt to derail the reelection campaign of George W. Bush. Rather lectured that it’s not just lying that needs to be challenged, but taking things out of context, this time in relation to the far-left Democratic Representatives:

[Trump] has taken their words out of context, which is pretty much a lie in and of itself. Now, the journalists' job, whether it's a rally or the President's tweet or the President's standing shouting on the back lawn of the White House, is to put that into context.

Calling for journalistic standards, the man who was forced out of his own network declared:

What we journalists should be doing is every time the President tells a lie, for example, about these four congressmen, right away it needs to be pointed out, that this is a lie.  And to call it what it is, not say, “Well, the President has said something here that's a little controversial.”

Stelter never once wondered if, just perhaps, Rather isn’t the best person to weigh in on lying and integrity. For more on the ex-CBS journalist’s early use of fake news, see information about the Fox Nation documentary Black Eye.

Later in the segment, Stelter asked Rather about the upcoming Robert Mueller hearings. Of course, the veteran journalist compared it to Watergate.

You know doing the Watergate hearings which everybody's probably tired of hearing about this time back in the 70s.... The power of television riveted public attention and made a big difference during the crimes committed by the Nixon administration which eventually resulted in his resignation. But I come back to -- a lot of it is up to Mueller. How much is he willing to give?

BRIAN STELTER:: What about retweeting racists and bigots? What about exaggerating urban crime? What about implying Puerto Rico is not a part of the United States? What about referring to Omarosa as that dog? I can keep going and going with these examples. But the point is clear. There is a pattern going back decades. And with so many examples, it's kind of easy to forget some of them. The pattern is the big story. And the challenge for the press is to show the pattern.

Look, Trump rebuts charges of racism by pointing to low unemployment rates and his support for criminal justice reform. That's an important part of the story. But journalists have to keep tracking the pattern that goes back decades. We have to keep observing for example the lack of diversity at the top of the Trump administration. And this is evident in nominations to the judicial branch as well. Here's a headline from two weeks in "The Washington Post". Democrats questioning the absence of black or Hispanic nominees among Trump's judges. Well, it's not just Democrats that should be questioning that.

All of this from the Central Park Five back then to the judges today are all a part of the same big story. But when we get so focused on the story of the day or the story of the week, I fear that we lose sight of the really big story that's going on. Telling congresswomen to go back to where they came from is racist, but it's a part of something much bigger that's going on. So, let's talk about all of that with a superstar panel that's with me here today in New York. Astead Herndon is a political reporter for "The New York Times". Tara Dowdell is a political and business strategist, but also a contestant, by the way, on season three of "The Apprentice." And legendary journalist Dan Rather is here as well, former anchor of "The CBS Evening News", now host of AXS TV and SiriusXM. 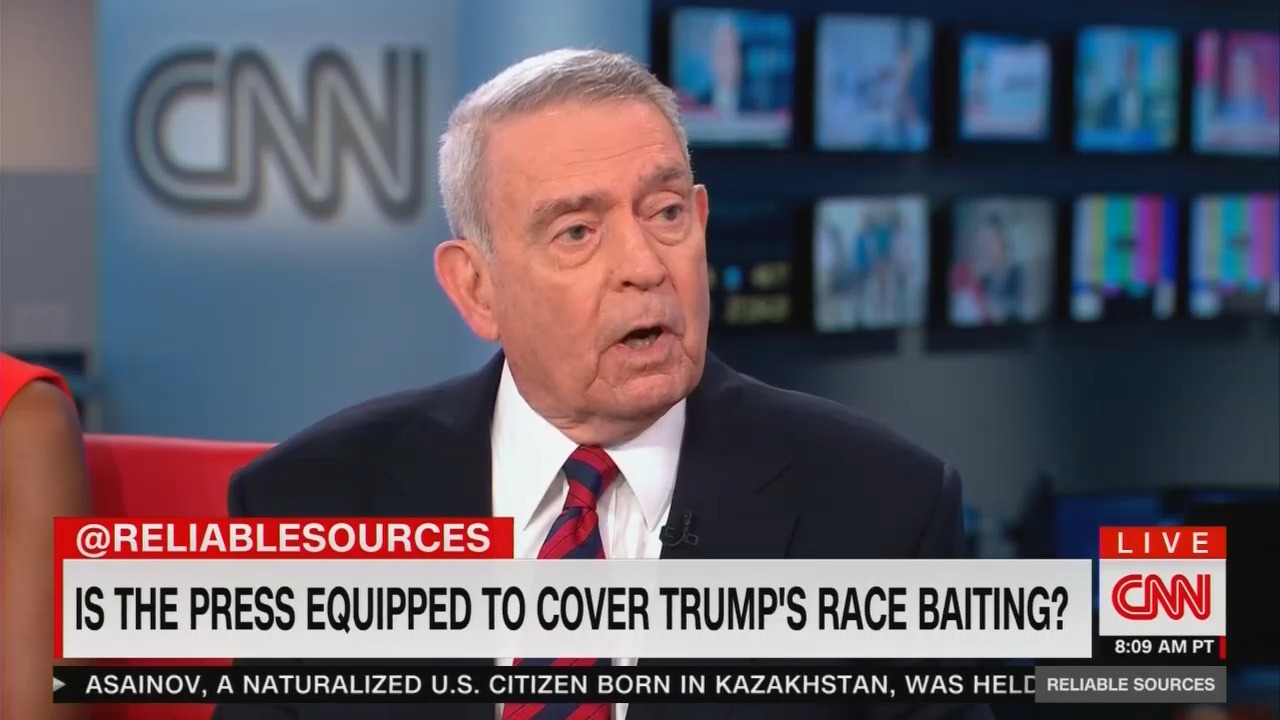 DAN RATHER: Part of it is he's a great showman. Let's face it, he's very good on television. He's is a power figure of television. But the other thing, I think we have to keep in mind, and this goes back to a bit of the previous conversation —  look, racism as is racism does, and this argument among journalists about whether we should say that racism is racism, I'm sorry, doesn't get very far. When it's racism, it needs to be called racism. But I do point out that the President, it isn't enough just to call out his racist language. When he does things like he lies repeatedly about the four young women congresswomen. He has lied repeatedly. He has taken their words out of context, which is pretty much a lie in and of itself. Now, the journalists' job, whether it's a rally or the President's tweet or the President's standing shouting on the back lawn of the White House, is to put that into context. There is a dangerous trap of forgetting journalists, the long line of things you outlined to start the program. It's very important to put these things into context. And, frankly, what we journalists should be doing is every time the President tells a lie, for example, about these four congressmen, right away it needs to be pointed out, that this is a lie.  And to call it what it is, not say, well, the President has said something here that's a little controversial.

STELTER: Yes, I hate the word "controversial" these days. I see it in banners and headlines all the time. Controversial can be a really good thing. In this case, it's a gross, sickening thing.

RATHER: But, you know, Americans pride themselves. We like straight talk. We like someone that looks you in the eye and has a firm handshake, and tells you what they think. Don't try to cut it. So, when it's racist, say that it's racist, when it's out of context, say it's out of context. Repeat what he said and then go through the record, because there is this one called a dangerous trap of forgetting a long record. And that applies not only to what he's done in race but what he's done to undermine the institutions in the country, from checks and balances. What he said during the campaign and he hasn't done.

This doesn't get nearly as enough attention, in my opinion, that he promised he's going to take care of health care -- he hasn't. He said he's going to start a big infrastructure -- he hasn't. So, hold him to account not just for the things that he says, including the racist things he says, but to what he said during the campaign. That's been pretty much forgotten, and I do think it needs to be brought to the forefront by reporters.

STELTER: So that's what he's saying, but what does it mean. What's going to happen as a result on Wednesday at the hearings? Let's talk about it now. The panel is back here with me. Dan Rather, the Mueller hearings, we've been waiting for this for months, the report has been out for more than three months, you know these print editions of the Mueller report, they've been all over the place, they've sold a couple hundred thousand copies but this is not -- you know, most Americans have not read this report.

STELTER: How important do you think the hearings will be? How many people will tune in?

RATHER: Well, I have no idea predicting rating a long time ago not to try to predict the ratings. However, it has the potential of being a tip over a moment. Everything depends on what Mueller is prepared to say and how well particularly the Democratic members of the committee handled the whole thing. It certainly has the potential to rivet the country. You know doing the Watergate hearings which everybody's probably tired of hearing about this time back in the 70s —

STELTER: I'm not. You tell me.

RATHER: But the power of television riveted public attention and made a big difference during the crimes committed by the Nixon administration which eventually resulted in his resignation. But I come back to -- a lot of it is up to Mueller. How much is he willing to give?

I mean, this again is his moment. What we'll see -- I will say that the Democrats can't have it both ways. Here is the chairman of the committee Congressman Nadler saying the president has committed high crimes and misdemeanors. So then question is well, what are you going to do about it.

RATHER: He's part of Democratic leadership that up to now has taken the pretty much the tactic, the strategy if you want to call that, a wounded Trump is better than a martyred Trump. So they want to keep saying he's committed crimes but so far they're not doing very much about it.

STELTER: Dan, last word to you, thirty seconds. When we're all watching this hearing on Wednesday, what should we watch for? What's your advice as an anchorman?

RATHER: Well, first of all, I think give us much time to it as you can because it may take time to develop. Secondly, read body language, eye contact, quality of voice. The television —  people get fixed on just the visual image. There's a speaker in the box and how Mueller handles himself, how members of the committee to handle themselves, all of that.

But I guess my best advice is give it as much time as you can and concentrate on what's being said and put it in context of everything else you know about the Trump administration. And keep in mind all along you know, in our pledge allegiance to the flag, part of it is one nation under God indivisible. And keep in mind when you're watching the hearings, do I think that the administration so far has tried to unite the country or do I think the administration has tried to divide the country whatever the Congress decides in the criminality.