Weird Moment on CNN: Trump Accuser Says ‘Most People Think of Rape as Being Sexy’

CNN anchor Anderson Cooper interviewed E. Jean Carroll on Monday, a woman who has accused Donald Trump of assaulting her in a dressing room back in the ‘90s. The interview, at times, took weird turns, including when Carroll described the reaction many have to the word rape as “fantasies” and “being sexy.”

Cooper seemed so unnerved by the exchange that he immediately cut to break and talked over her. After telling the host that there was “penetration” in the assault, she added, “I was not thrown on the ground and ravished which the word rape carries so many sexual connotations. This was not sexual.” Cooper seemed clearly confused by this. Carroll then added, “I think most people think of rape as being sexy.”

Cooper immediately tried to cut to break and this awkward exchange happened:

E. JEAN CARROLL: I think most people think of rape as being sexy.

CARROLL: They think of the fantasies.

COOPER: Mmm. We’re going to take a quick break if you can stick around on the other side.

CARROLL: You’re fascinating to talk to.

Last week, when asked on MSNBC if she would bring rape charges against Trump, she replied, “I would find it disrespectful to the women who are down on the border who are being raped around the clock down there without any protection.”

Cooper introduced the interview on Monday by bringing up “When Bill Clinton was accused two decades ago, it shook the country.” The rape allegations of Juanita Broaddrick did shake Americans, but not many journalists. CNN’s Dan Rather dismissed it and said people aren’t interested. On Tuesday, the networks ignored Carroll describing rape as “sexy.”

Today, it's also part of a larger and more troubling story of collective indifference. Somehow, and we'll explore the reasons why, the fact that the president has been accused 14 other times of unwanted sexual advances or outright sexual assault, has numbed people to just how abnormal this is -- these kind of accusations. When Bill Clinton was accused two decades ago, it shook the country. Well, now the country shrugs as if one allegation is an outrage but 15 are a statistic.

Even though he's on tape boasting about being able to get away with such assaults because he's a celebrity, even when as in this case the alleged assault is corroborated by two other people that she told at the time, back in the mid '90s. That's when writer and Elle Magazine advice columnist E. Jean Carroll says this happened at a dressing room at New York clothing store Bergdorf Goodman, just steps away from Trump Tower. She writes about it and other painful encounters in her book "What Do We need Men For?: A Modest Proposal." 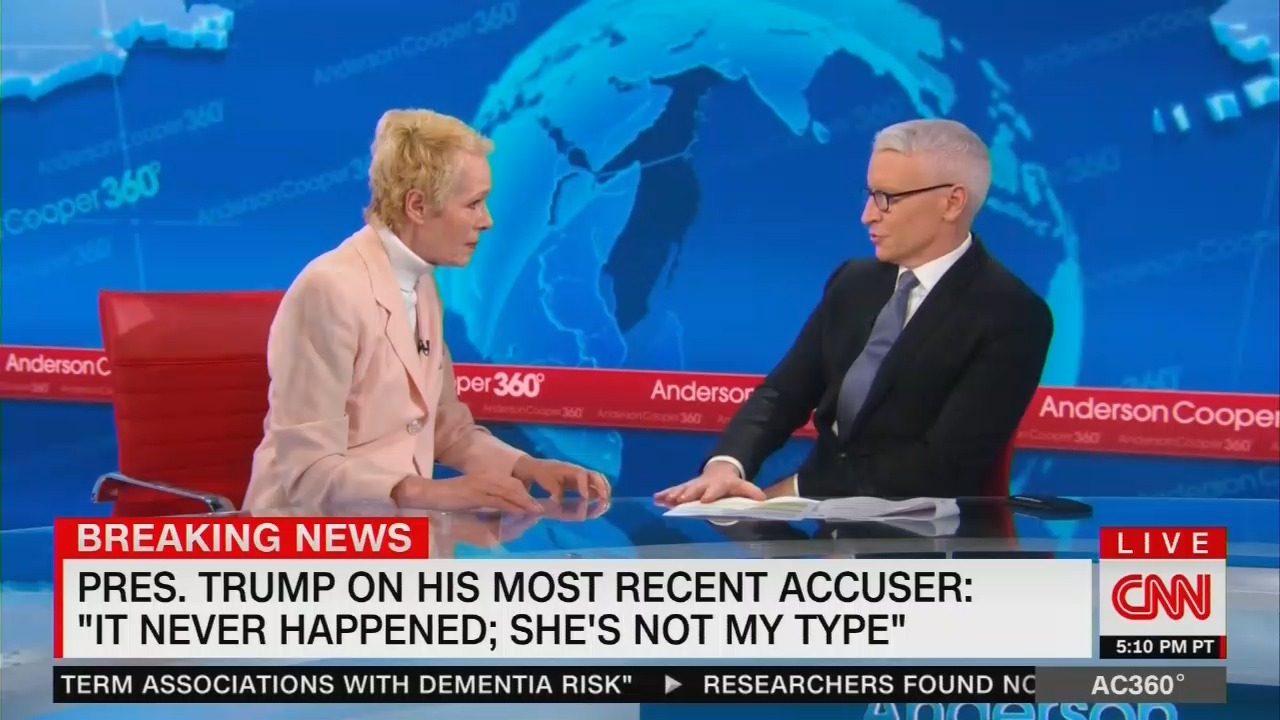 COOPER: And this is not a question I would normally ask and if you don't want to answer, I totally understand but given the prior accusations which have all been of forms of assault or harassment, you're saying there was actual penetration?

COOPER: Did you -- which is -- puts it into a different category of these other women who have come I think technically -- that is -- that is the definition of rape. One definition.

CARROLL: That is the definition.
...

E. JEAN CARROLL: I always think back and think that was the stupidest thing I have done. I should have never have done it and then I didn't --

ANDERSON COOPER: When you say you should have never done it —

CARROLL: It was a dumb thing to go into a dressing room with a man that I hardly know and have him shut the door and then be unable to stop him and I was a competitive athlete so I wasn’t like a — I didn't freeze. I rose to the occasion and it did not last long and that's why I don't use the word you just used. I use the word fight.

COOPER: You don't use the word rape?

CARROLL: I was not thrown on the ground and ravished which the word rape carries so many sexual connotations. This was not sexual. It hurt. It just —  it just —  you know.

COOPER: I think most people think of rape as —  it is a violent assault. It is not --

CARROLL: I think most people think of rape as being sexy.

CARROLL: They think of the fantasies.

COOPER: Mmm. We’re going to take a quick break if you can stick around on the other side.

COOPER: You’re fascinating to talk to.